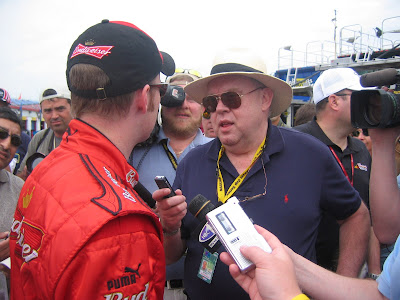 It seems former Orlando Sentinel writer and Wind Tunnel guest Ed Hinton has made a little discovery since he changed teams.

Now playing on the biggest sports field in the world, Hinton has discovered the joy of writing on ESPN.com and having Internet users comment on his topics.

Click here for one of the funniest columns about NASCAR haters in recent memory. It seems that during his time at ESPN, Hinton has discovered that a very large slice of the sports TV pie contains diehard stick-and-ball types who loathe even the mention of the word NASCAR.

The true irony of Hinton's column is that some of the biggest NASCAR haters are employed by ESPN in positions of great power. Here are some suggestions of locations within the ESPN family that Hinton might visit.

Perhaps, he could stroll over to Tony Kornheiser and have a little NASCAR conversation. "Not a real sport!" screamed Kornheiser recently on Pardon The Interruption when talking about ABC dumping NASCAR viewers to ESPN2 during the Phoenix race.

How about stopping by the studios of Around The Horn and asking Tony Reali why NASCAR is completely ignored and often publicly abused on that TV series? After all, ESPN's "NASCAR expert" Tim Colishaw is a frequent guest.

Hinton needs look no further than the ESPN Radio studios to find the Mike and Mike In The Morning show. Both Golic and Greenberg ventured to the Texas Motor Speedway only to completely ignore the sport with the exception of a brief Jimmie Johnson interview at the end of this special "NASCAR show."

Wrapping-up this first NASCAR haters tour of ESPN would be a meeting with the good folks at ESPNEWS. From February to late August, the ESPNEWS team wowed NASCAR fans by carrying the post-race news conferences from each Sprint Cup Series race.

As you might expect, there was a wide range of emotion on display from anger and frustration to complete joy and relief. The top NASCAR drivers, crew chiefs and owners all took their turns facing live questions from a frequently rowdy NASCAR press corps. One of the reporters heard quite often was named Hinton.

But, a funny thing happened on the way to Homestead. In September, once college and pro football got underway there were some changes at ESPNEWS.

Despite the fact that loyal NASCAR fans had been making ESPNEWS a post-race destination for more than six months, the NASCAR coverage was suddenly long gone like Terrell Owens through the Seattle Seahawks backfield.

The post-race press conference coverage during the ten ABC Chase for the Championship races was just dumped like a bad blind date and never heard from again.

Despite a deluge of comments and emails to ESPN asking why, NASCAR fans were ignored by The Worldwide Leader with a deafening silence.

For the moment, Mr. Hinton can leave First Take, ESPN's Hannah Storm and the new morning SportsCenter for his next NASCAR hating excursion.

Before he experiences the brutal NASCAR reality of those three he has to figure out this whole Internet thing. Welcome to ESPN, Ed.

The Daly Planet welcomes comments from readers. Just click on the COMMENTS button below and follow the easy instructions. The rules for posting are located on the right side of the main page. Thank you for taking the time to stop by.
Posted by Daly Planet Editor at 9:30 AM 28 comments: