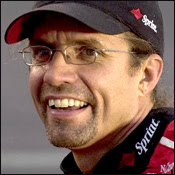 The recent transformation of SPEED Channel's Tradin' Paint show has resulted in a very interesting and refreshing voice appearing on TV. In the past, we have seen Kyle Petty in his role as driver, father, husband, and owner. As a group of fans, we have been with him through both triumph and tragedy of the highest order. Now, SPEED has offered him a platform to expand his presence in the sport, and he is making the most of it.

Michael Waltrip was the original "driver" on Tradin' Paint, which features John Roberts as host. The third panelist is a rotating journalist, who can be from the print, radio, or TV side of the business. In this episode, Brant James from the St. Petersburg (Florida) Times was on the panel. The program itself is a thirty minute fast-paced conversation about NASCAR topics of the week. This show originated from Talladega, and dealt mostly with topics that arose from the Phoenix racing weekend.

Petty began this show with a spirited defense of Tony Stewart, his comments, and his passion for racing. Kyle can speak from a great perspective, and brought to bear his personal insights about how and why drivers are so different, yet share such a singular passion. About Stewart, Petty said "we want characters in this sport, but when we get one...we try to crush him." Petty also said he was present in the Media Center when Stewart spoke after meeting with NASCAR, and pointed out the fact that Tony's perspective was changed not by force, but by facts. Nicely said.

When addressing Denny Hamlin's questionable pit road speeding violation, Petty related it to professional golf. "Its just like a golfer" said Petty, "you don't think about the sixty foot putt you made, you think about that shank in the water that cost you two strokes. Its the same with Denny, all he could think about is that he sped on pit road." Petty reminded everyone...Denny finished third despite the problems.

Then, Petty confronted the "flag controversy" about Jeff Gordon head-on. "Jeff Gordon is the classiest NASCAR driver and represents the sport better than anybody does today." Petty was emphatic and continued with "he (Gordon) is the face that we want NASCAR to be." Petty wrapped it up with his strongest statement on the program yet when he said "Jeff Gordon is our leader right now." Friends, that is a man taking a stand.

Dale Earnhardt Junior's contract negotiations were next, and Petty was on a roll. "His father started DEI, but that doesn't mean that Junior has to driver for DEI. His father drove for Childress. Budweiser, Junior, and NASCAR will be a package for a long time to come. So, don't start trading in your 8 stuff yet" said Kyle. He nicely framed this situation from a perspective of someone who knows the players, the game, and has been involved in it himself.

Finally, his most interesting comments of the night were reserved for the folks from Kentucky Speedway. In referring to Lisa France Kennedy and the International Speedway Corporation, Petty drew a historical comparison. "ISC invested in race tracks forty years ago when no one gave a rat's rear-end about this sport." He continued with "just because there are a bunch of people running around the country building race tracks and saying they need a date (race)...I don't care." Petty hammered home the fact that those who were there when times were tough deserve to be there when things are booming. An interesting analogy from the former "bad boy" turned businessman.

SPEED took a gamble when they brought Petty onto this show. Kyle can be difficult, and has been involved in some tough times with his race team. However, it is clear that Petty has achieved a new level of maturity and speaks from a well-rounded and calm perspective that really fits him. Even as Jeff Burton and Jeff Gordon stand-out as NASCAR media darlings, Petty is using this opportunity and his upcoming "break" to call races on TNT as a solid foundation for an eventual TV career.

With Rusty Wallace, Dale Jarrett and Darrell Waltrip speaking as former high-profile drivers and series champions, it certainly is interesting to hear opinions from someone who has slugged it out in the NASCAR trenches for decades, and continues to do so. Tradin" Paint deserves better exposure on SPEED, but its pretty easy to find if viewers take a minute to check the listings. I did this past week, and found a show that I now look forward to seeing the next time. Kudos to SPEED for making these changes, and keeping this show on the air.

The Daly Planet welcomes reader comments. Click on the COMMENTS button below, or email editor@thedalyplanet.tv if you wish not to be published. Thanks again for stopping by.
Posted by Daly Planet Editor at 8:53 PM 1 comment: