SPEED presents both the Set-Up pre-race show and the Craftsman Truck Series race tonight from Bristol Motor Speedway. This thread will host the comments during the broadcast, and offer an opportunity for post-race reactions.

Once again, the rules for posting are on the right side of the main page and basically ask that you focus your comments on the TV side of the sport, and not the drivers or teams. Thanks again for choosing to voice your opinion at The Daly Planet.
Posted by Daly Planet Editor at 7:10 PM 14 comments:

Delayed twenty-five minutes by Little League play, NASCAR Now took to the air on Wednesday with a lot of things to talk about. Host Ryan Burr has always set a fast pace on the show he hosts, and this was no exception.

Burr led directly into the Tuesday race highlights from the program's opening animation and never looked back. He really brings a lot to the table as he voices-over the highlights, and adds a lot of excitement to the show.

Kurt Busch and his Crew Chief Pat Tryson appeared in a live interview right after the highlights, what a concept! Burr quizzed them both about the season, this past weekend, and the upcoming Bristol race. Busch certainly has come a long way, and Tryson seems to be just the person to manage his racing activities.

Burr kept talking to them both, and I had the feeling that it was a couple of guys who knew racing just talking. You can get the vibe from the drivers and crew chiefs as to whether they believe the person asking them the questions is clued-in, or clue-less. You could tell these two knew Burr was clued-in.

NASCAR Now did their own version of "through the field" with footage and sound from the key drivers in the NEXTEL Cup Michigan race. This recap format was outstanding, and Burr's information was first-rate.

Burr brought-in Brad Daugherty, who really has continued to improve in his strong and opinionated comments. His remarks on Dale Earnhardt Junior and his lack of momentum were clear cut, and his statement about Junior being overshadowed by Kurt Busch's team at Bristol pulled no punches. As we mentioned earlier, both Burr and Allen Bestwick really bring out the best in Daugherty.

Reporter Terry Blount loves to talk with Burr. Wednesday, he had center stage to talk about the new Chase format, the problems it brings, and why Hendrick Motorsports COT domination has faded. Blount was outspoken in saying both Jeff Gordon and Jimmy Johnson are his clear favorites for the championship.

Blount and Marty Smith returned for some news, including the logistical hassle of getting to Bristol for the Cup teams. These two updated the Scott Riggs, Toyota, and AT&T stories. Finally, the new rumor of the week is Dario Franchitti moving from open-wheel land to NASCAR at some point. Blount put the possibility of this move in perspective, including the team Dario was talking with about the change.

Unfortunately, NASCAR Now shot itself in the foot once again in the final segment of the program. Every NASCAR fan knows that this Wednesday night the Craftsman Truck Series is going to be live on SPEED. To ESPN, this does not matter. Rather than preview the Truck race later that night, the show chose to offer a pre-produced generic preview of the NEXTEL Cup race some three days away.

The struggle for this program is whether NASCAR Now is about NASCAR, or only NASCAR on ESPN. If there was a defining moment in that process, it might have been tonight. Some top names are in the Truck race, and this race will show fans how the new surface of the racetrack holds-up. Any way you slice it, tonight is big for NASCAR in many ways.

Pretending that any NASCAR race not on ESPN does not exist is unforgivable. NASCAR has a deep and vested interest in the Truck Series, and for ESPN to purposefully shun them in a program airing less than one hour before the race is simply wrong.

This type of bad decision affects the credibility of Burr, of NASCAR Now, and ultimately of ESPN. A great show ruined by one bad decision. Maybe they should just change the title to NASCAR on ESPN Now.

The Daly Planet welcomes comments from readers. Simply click on the COMMENTS button below, or email editor@thedalyplanet.tv if you wish not to be published. Thanks again for taking the time to stop-by.
Posted by Daly Planet Editor at 6:06 PM 28 comments: 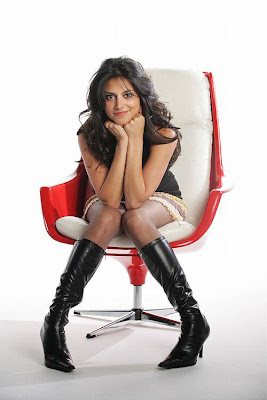 Back on June 1st, The Daly Planet wrote a column about Melanie, the new SPEED Channel promo girl. SPEED's new campaign featured this young woman challenging viewers with a single question, "can you handle it?"

Well, its been about three months and apparently lots of SPEED viewers are just about done handling it. On the SPEEDtv.com message boards, and on Internet racing forums, the endless repetitions of her promos are taking their toll on the American psyche.

The original reason The Daly Planet addressed this issue was NASCAR RaceDay on SPEED. This show is often on-the-air around noon on Sunday, and back on June 1st it featured Melanie twirling her panties on her finger and asking "can you handle it?"

We felt that there might perhaps be a better time to "handle it" than during the biggest and most popular family-oriented show on SPEED. Did we mention noon on Sunday?

Now, almost any racing fan watching SPEED has seen Melanie literally thousands of times. SPEED forum users suggest that she is now like both the bikini model and the tasteless drunken mom on Texas Hardtails. Over and over again, no matter what show is being watched, there they are.

SPEED's Senior VP of Marketing, Lila Everett, said "this is the first campaign where we come out and say that we're confident in where we are and who we are as a network and this is going to be our message. It says girls, cars, party."

This "girls, cars, party" message leaves out one group that is pretty important to SPEED. That would be the female NASCAR fans. They already are girls, already have cars, and certainly can party. Demographics say NASCAR is almost fifty percent female in its fanbase, and that is a staggering number for a professional sport. The audience at RaceDay, and the other SPEED Stage shows confirm that dynamic every racing weekend.

SPEED's aggressive promotional campaign with Melanie is going to expand to movie theaters, fast-food restaurants, and even online gaming sites. It is aimed at the 18 to 35 year-old male and is called a SPEED Channel "branding campaign."

In an era where NASCAR on SPEED shares time with Pinks, Unique Whips, Payback, and NOPI Tunervision, this approach might be expected, and even understood. But, for some reason SPEED has a long history of beating a promo theme to death on-the-air simply by failing to limit the timeslots and the amount of times these spots are used.

As for Melanie herself, she is a working actress looking for more exposure. She said "the SPEED campaign will be a great way to get my face out there without having to do reality television."

It seems ironic that the entire campaign is designed to promote the "reality shows" on SPEED that they label as "lifestyle programming." Sometimes on SPEED, it seems as if adult females in American society do not even have a lifestyle. So, just remember...girls, cars, party.

The Daly Planet welcomes comments from readers. Simply click on the COMMENTS button below, or email editor@thedalyplanet.tv if you wish not to be published. Thanks for taking the time to stop-by and leave your opinion.
Posted by Daly Planet Editor at 10:59 AM 17 comments:

Wednesday night Krista Voda, Ray Dunlap and the SPEED gang telecast the Craftsman Truck Series live in Bristol, TN. The pre-race show is 7:30PM, with the race starting at 8PM. This should be a blast.

Also Wednesday, ABC continues its NASCAR in Primetime series at 9PM with a continuing look behind-the-scenes from races filmed earlier this season and presented in documentary style. Although this episode goes head-to-head with the Trucks in Bristol, it should be a good show to DVR and review later.

ESPN's First Take show followed the NEXTEL Cup race, and featured a mini-version of NASCAR Now. A dapper Boris Said was giddy to be alongside of Ryan Burr. These two were great, and flew through the race highlights including lots of interviews from the track. Burr is wonderful in the studio, and brought out the best in Boris who occassionally needs a little direction.

The Daly Planet welcomes your comments on these topics. Simply click on the COMMENTS button below, or email editor@thedalyplanet if you wish not to be published. Thanks to all who comment and email for keeping us up on NASCAR TV news and information.
Posted by Daly Planet Editor at 1:15 AM 5 comments: