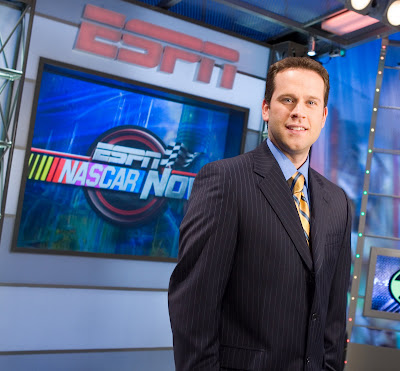 Nothing could have been better for the Petty's than agreeing to appear on the Wednesday edition of NASCAR Now. Finally, someone asked the right questions and got the straight answers on the Petty merger. That person was Ryan Burr.

The veteran ESPNEWS anchor is in the middle of his first season as a full-time host of NASCAR Now. Along with Nicole Manske, these two team-up to handle the show six days a week.

On this day, the program was entirely dedicated to the Petty story and the background information that helped it all to make sense. Earlier, viewers had seen on both SPEED and ESPNEWS coverage of the 11AM press conference to make the announcement.

A financial firm, called Boston Ventures, was going to bring cash to the Petty organization. In return, Petty would surrender majority ownership and also turn-over the Richard Petty Driving Experience to that group.

While Kyle Petty did his best to host the press conference, he really needed a veteran Public Relations person to handle the festivities. Kyle left a lot of serious issues unresolved and the few media questions asked live on-site were not very helpful.

In the past, NASCAR Now has struggled to wrap its arms around these types of issues. Wednesday, the TV series showed just how far it had come. Burr began with a sparkling interview of Richard Petty that allowed him to address both the professional and personal reasons that he made the Boston Ventures merger decision.

The King began cautiously, and then slowly opened himself up to the TV audience about his own problem of not keeping his business up-to-date. He spoke honestly about his trauma of moving from Level Cross to the new shops in the Mooresville area and now surrendering control of the decades-old family business. He kept a smile on his face, but there was no denying these issues were about to change his life forever.

It was ESPN Reporter David Newton who was up next and put a journalism perspective on the announcement. He had the information on the set-up of the company and a potential third team for next season. He reinforced that once the move from Level Cross was complete, it had become clear that an influx of new money was the only thing that was going to keep Petty Racing alive.

Burr followed-up these interviews with another excellent effort involving Kyle Petty. Burr started right-off by challenging Petty on why and how this came about. Kyle was very much on-point and spoke like his father in clear and concise terms. For Kyle, re-signing Bobby Labonte was a key to this deal.

This interview gave Kyle the kind of platform he enjoys. In much the same way that Kyle speaks on Tradin' Paint, it was all about the bottom line and the reality of life. Kyle said clearly this was his father's decision and that he is an employee. It seemed that Kyle was ready to hand his unofficial CEO role over to former ESPN employee David Zucker and get back to his other interests.

In a change of pace, it was Jimmie Johnson up next answering some good questions about the Petty history and their place in the sport. Johnson was in NYC doing a promotion for Gatorade, but showed his understanding of NASCAR's history by hoping that the Petty team does not eventually leave the sport.

Over the last several years, it has been an emerging Johnson who has proven to be a thoughtful spokesman in the same mold as Jeff Burton. Johnson's conversation about the changing nature of the costs in the sport addressed a larger issue that NASCAR has yet to confront. Yes, he was allowed his short Gatorade promo.

Bobby Labonte was the final piece of the puzzle for Burr to address. Labonte was clear that his new four year deal would probably close-out his driving career but open the door to other opportunities in the sport away from the racing action. Everyone Burr interviewed said Labonte's decision to stay with Petty might have saved the franchise.

On these types of days, NASCAR Now benefits from having a veteran newsman like Burr at the helm. Since last season, Burr has worked hard to learn the sport and this season has been traveling for the show. Last weekend, he reported from Pocono and had more valuable interaction in-person with the drivers and personalities he often interviews from Connecticut.

Wednesday, ESPN continued to grow its new relationship with NASCAR. As the build-up to the ESPN/ABC portion of the Sprint Cup TV package begins in July, NASCAR Now will play a key role down the stretch.

Burr, Manske and Allen Bestwick are about to enter the heart of the season for the first time as a team. Judging by the series-to-date, viewers should be well-served by their efforts.

The Daly Planet welcomes comments from readers. Simply click on the COMMENTS button below and follow the easy instructions. The rules for posting are located on the right side of the main page. Thank you for taking the time to stop by.
Posted by Daly Planet Editor at 7:47 PM 22 comments: 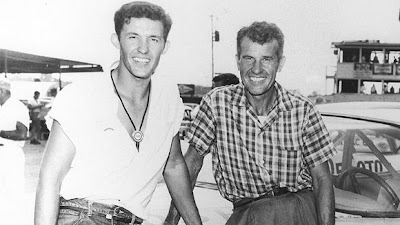 The word "Boston" has a certain meaning to it for veteran NASCAR fans. Another major market in the US where NASCAR has no footprint, no fan base and no support. There is no other city in the US where stick-and-ball sports totally dominate the sports scene like Boston.

At a live press conference on Wednesday morning, the words Boston Ventures were said many times. It was obvious to those watching on SPEED and ESPNEWS that the issues being discussed were important. That was because sitting at the head table at Lowe's Motor Speedway was Mr. Brian France.

Having the Chairman of NASCAR participate in a press conference where one team was essentially being bought certainly spoke volumes about the financial realities of the sport in 2008.

SPEED's Bob Dillner opened the coverage with an introduction and led directly into Kyle Petty who handled the press conference. This is the new dynamic of NASCAR announcements, a nationally televised and coordinated media event.

This approach does two things for the participants. It allows them to control the action and agenda from the beginning. In this case, by holding the event at Lowe's Motor Speedway and not the new Petty shops in Mooresville, NC. It also takes any member of the media who is not physically located in the greater Charlotte area out of the equation.

Just last week, TNT held a media announcement previewing the Sprint Cup coverage that network was about to begin. Media members nationwide were given the opportunity to participate in a conference call and allowed to ask questions. No such thing happened at this press conference.

One look and a quick listen to the participants showed exactly where NASCAR is heading. Three distinct NASCAR faces in Bobby Labonte, Kyle Petty and the King himself shared the stage with three blue blazers and lots of "corporate speak." Everything was going to be "leveraged" and "branded" where the Petty name was concerned.

David Zucker, introduced as the new Petty CEO, has no track record in any type of actual management of a sports or racing-related business. His recent departure from Midway Games came after a loss of over $200 million dollars and a drop in the stock price of the company of over 70%.

That company is perhaps best known for the Mortal Kombat, Gauntlet and Joust video games. Prior to that post, Zucker was the CEO of Playboy Enterprises. After only one year in that position, he departed with some hard feelings left behind for Midway.

When asked by Lee Spencer of Fox Sports what Zucker was going to do with the Petty "brand," Zucker had no answers. There was seemingly nothing new on the horizon except having the Richard Petty Driving Experience now also owned by Boston Ventures.

When asked just how much of both Petty companies Boston Ventures now owned, all parties decided to decline to answer. When asked why this merger made sense, Kyle Petty tried very hard to compare this action to the one taken recently by Roush Racing and the Fenway organization.

Brian France was put on the spot about the need for outside investors in the sport, and he use the opportunity to talk about how attractive a sport NASCAR is to do business with right now. He called it "flattering" and allowed Richard Petty to follow-up by suggesting that outside investors were actually being drawn to NASCAR.

France denied the potential for a franchise system, and clearly indicated that Petty would be just another team in 2009. No on-scene media member asked if the new investors understood that once outside of the Top 35, the Petty cars might not even make the actual races.

Boston Ventures was represented by Managing Partner Andy Davis, who is an investment banker. Davis was clearly out of his element, but held the party line that this was a merger and everyone was partners in the deal. Somehow, it seemed like a sad time for a proud company that was fighting for its NASCAR life.

Television has been used now by several companies for these types of announcements, most notably Hendrick Racing and Dale Earnhardt Junior. There seems to be something fundamentally wrong with this situation, but SPEED tends to be in a tough situation.

On the Boston Ventures website, the news of this merger was not posted. Over at the Petty Racing site, the big picture was being painted with all of the details left out. SPEED had clearly been used as a part of this marketing agenda and this seems to be the trend.

Even more ironic was that SPEED pre-empted one hour of Infomercials to cover it. After the press conference, SPEED viewers were reminded that Bowflex is still only $19 dollars a month. Ultimately, it all comes down to the almighty dollar.

The NASCAR "culture clash" is in full swing, with the blue blazers of the businessmen mixing with the cowboy hats and logo-wear of NASCAR veterans. Now, rather than read about it in the newspaper we are seeing the transformation of the sport happen live on cable TV. The only question is who will be next?

The Daly Planet welcomes comments from readers. Simply click on the COMMENTS button below and follow the easy instructions. The rules for posting are listed on the right side of the main page. Thank you for stopping by.
Posted by Daly Planet Editor at 11:11 AM 12 comments: