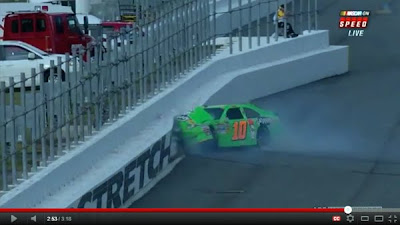 Danica Patrick's car got turned in a bad way at a bad place on a fast track. Headed toward the SAFER barrier at top speed, there was only one thing the TV director of SPEED's telecast of the Gatorade Duels wanted to do.

That was to show her in-car camera live on national television as she hit.

The backstretch camera on the air zoomed-in to Patrick's car as it hurdled toward the inside wall at the Daytona International Speedway. Seconds later, just as the car made contact, the picture was changed to Patrick's in-car camera. The angle used was the view out the front from the roof cam.

Viewers saw twisted sheet metal and moisture on the camera lens as the car continued to slide. But for SPEED even that wasn't enough. The director then switched live to the in-car camera angle showing Patrick inside the car.

It was impossible to know her condition at this moment in time.

On a big track surrounded by SAFER barriers, tucked tightly into her custom-made seat and firmly strapped into her HANS device, Patrick was moving. What if it had been different? What if the pictures sent nationwide live by SPEED showed the dark side of racing?

What if the woman driver who this week spoke at the DC Press Club, appeared on ESPN's PTI show and has been the focus of a national media frenzy was injured. What if she was unconscious. What if the situation was even worse.

The single reason the SPEED director used that shot was because he knew that was what the network expected and his boss wanted. There was no better example of how SPEED has come to view NASCAR racing as nothing more than a reality TV product to be exploited for ratings than this moment.

After the director showed the camera live, there was silence. Then Darrell Waltrip jumped-in after seeing Patrick move around in the car. "Glad we got that camera in there with Danica to see that she is fine," he said.

What would he have said about that camera if she was not? Of all people, Waltrip knows all too well the tragic side of the sport and how it happens in a flash.

Once Patrick had exited the car under her own power, it was time for SPEED to replay the in-car camera angle of Patrick inside the car while hitting the wall. Then, it was time to replay it again. Heading for commercial, what better "bumper" to use than the same replay?

SPEED's many technical problems on the day plagued Dick Berggren's interview with Patrick outside of the Infield Care Center. Between the black video, out of sync audio and poor camera angles, the only thing that worked was when SPEED replayed Patrick's accident yet again.

I'm not the biggest Danica Patrick fan, but I know when you are racing at Daytona in a Sprint Cup Series event you deserve a certain fundamental level of respect as a competitor.

I don't think Patrick was respected by SPEED in her incident, her interview or the use of her in-car camera shot while hitting the wall as a "roll-out" to a commercial.

Patrick later tweeted: "Well...that was a bummer. I am OK, icing my sore spots down, getting ready for the weekend! Thanks for the concern." She then added: "I need to thank @nascar for the safer barrier too."

SAFER barrier or not, TV skated on thin ice Thursday by going live to the in-car camera of a Sprint Cup Series driver after a high-speed accident before that driver's condition was known.

It was on February 18th, just eleven years ago that we lost Dale Earnhardt Sr. On that day, FOX went ahead with the winner's interview, went off the air without updating the Earnhardt situation and left the entire NASCAR Nation in an information vacuum. It was a disaster for the network with the fans.

Sunday's Daytona 500 marks the return of pack racing, high speeds and features 18 more cars in the big race than the Duels. It should be interesting to see if the NASCAR on FOX team gives drivers involved in incidents the respect they deserve or follows the SPEED model of exploiting the violence and potential injury for the shock value and TV ratings.

We welcome your comments on this subject. To add your opinion, just click on the comments button below. Thank you for taking the time to stop by The Daly Planet.