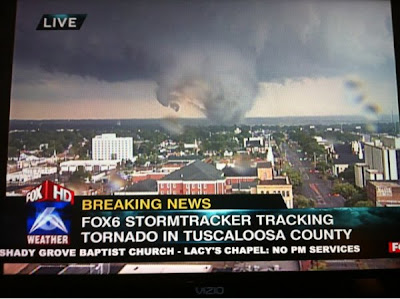 We are going to step away from NASCAR for one day and return on Thursday evening with a new column. Many Americans lost their lives on Wednesday night in an amazing tornado outbreak that stretched from Texas through Virginia.

As perhaps many of you did, I turned to the cable news networks for updates. I found O'Reilly on FOX, a show about greed on CNBC, Nancy Grace on Headline News, former Gov. Spitzer on CNN and some guy who wanted the last word on MSNBC. What I did not find was coverage of this national disaster.

It was only the hardworking men and women at The Weather Channel (TWC) who were holding up their end of the bargain and offering non-stop coverage of the storms. Radar, videos and pics were great tools to help people across the Southeast stay informed.

TWC had reporters in the field doing liveshots, several roaming with the storms. The network has a severe storm expert following the live radar and offering a tremendous amount of information to viewers. Finally, TWC was completely on top of the social media side with information, pictures and videos from Twitter and Facebook.

The outrage that FOX, CNN and the NBC cable news nets appeared not to care about the weather situation is well-deserved. Between President Obama's birth certificate, the royal wedding and Donald Trump's self-promotion there was plenty of juicy content for the various primetime programs.

These types of shows are called long-form branded content. Long because they are one hour in length and branded because they have a specific person, like O'Reilly or Nancy Grace, associated with them. It wasn't always this way, but it is what the current cable TV news networks have become.

TWC's severe weather expert Dr. Greg Forbes was no doubt a lifesaver to many Wednesday night. The tireless meteorologist was constantly updating a myriad of radar images on the fly and continually moving people out of the way of the storm.

His intensity made it even more ironic when a spin of the dial caught the cable news talking heads ranting on subjects that made little impact but let them make noise in the ratings.

Perhaps you can share with us your actions on seeking news about these Wednesday evening storms. What network or website did you wind-up turning to for the information you wanted? How did it work and what made sense to you the most?

I think it's time for the cable news networks, especially CNN and HLN to look in the mirror and return to program line-ups based on information from the real world. It used to be that the cable news nets filled an agenda of updating the stories of the day in primetime. Now, it's all about scripted drama, overstatements and agendas.

Leave us a note on your opinion of this topic by clicking the comments button below. This is a family-friendly website, please keep that in mind when posting. Thank you for taking the time to stop by The Daly Planet.

ESPN Riding Out A Bumpy Week 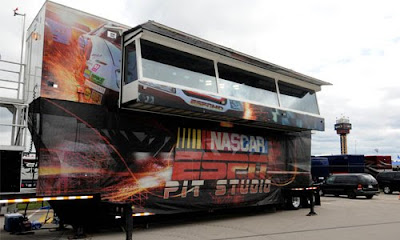 It was back in early February when NASCAR confirmed that there would be a TV network switch for the Nationwide Series race from Richmond, VA. Normally, all the races in that series appear on ESPN2 or another of the ESPN family of TV networks.

At the time, it seemed simple enough. ESPN2 was going to be smack dab in the middle of the second round of the NFL Draft on Friday night, April 29. The company's other two networks, ESPN and ABC, were also tied-up.

All eyes immediately turned to SPEED. The network would already be on-site providing the kind of "support programming" it has offered for years. In addition, the NASCAR on FOX team would already be there for Saturday night's Sprint Cup Series race.

SPEED has produced the Camping World Truck Series for years. In addition, the Gatorade Duels and the All-Star race air on SPEED with a hybrid team of announcers and production staff. One Nationwide Series race certainly would not be a problem.

After NASCAR made the switch to SPEED official, things quieted down rather quickly as the season got underway. Now as the race approaches, business is picking up where the topic is ESPN and the Nationwide Series coverage.

Click here for the Bob Pockrass column from Scenedaily.com. Here is an excerpt:

"But the switch (of networks) comes across as a sign that ESPN doesn’t care about the Nationwide Series and that other sports programming comes first."

This frustration is born out of the conflicts ESPN has been involved in with the Nationwide Series and other live programming for several years now. The biggest clash has been with college football. From September to November, the Nationwide races are stuck in a little afternoon timeslot between football games.

It's very interesting to see an entire company geared-up for college football come to a screaming halt for NASCAR racing. It appears to be an inconvenience and the topic has often been raised as to why those races just don't move to SPEED.

Back in October of 2007 this situation came to a head with the stand-alone Nationwide Series race in Memphis, TN. Click here to read "ESPN Pushes NASCAR to the Back Burner." It was a classic moment in NASCAR TV history. Here is an excerpt:

"The Busch Series has sometimes hopped between three ESPN networks in one single race. In Memphis the caps were off, the heads were bowed and the invocation was underway. Then, suddenly on ESPN Classic...NASCAR was no more. College football took to the air right in the middle of the NASCAR prayer. Does it get any worse than that? In the middle of the prayer and without Marty Reid saying a word."

"NASCAR fans quickly grabbed their remotes and switched back to ESPN2 only to see live college football. Switching to ESPN it was live horse racing. Ladies and gentleman, The NASCAR Busch Series had left the building, the network and the airwaves."

"NASCAR had been told where it stood very clearly. Only a nice tackle by a young man from the Iowa Hawkeyes ended the ESPN2 game a short time later and allowed NASCAR to return to the air. But, the point had been made clear."

Just this week, the double top secret NASCAR Fan Council survey was focused on one topic. That was questions about each of the NASCAR on ESPN announcers. Fans were asked, in confidence of course, to detail the likes and dislikes about the members of the TV team that provides the coverage of these very Nationwide Series events. The survey pulled no punches.

Making hay while the sun shines is a phrase that the folks at SPEED know all too well this week. Since there is no truck series race, SPEED's focus has been on getting as much publicity as possible for the Nationwide Series telecast.

There is perhaps no better way to get tongues wagging and keyboards typing than to announce that it will be a double-barreled Waltrip attack for the Richmond coverage. Darrell and Michael will be teamed with truck series announcer Rick Allen for this special event.

Tuesday, word leaked-out that SPEED had added yet another wrinkle. The popular online RaceBuddy application will be used for the Richmond Nationwide Series race. Fans love gizmo's and this allows for four additional camera views, social media live chat and no TV commercials. It can be accessed for free and without any sign-up at NASCAR.com on Friday.

So, the ESPN Infield Pit Studio and Tech Garage are both parked this weekend. Instead, SPEED will offer over twelve live hours of programming from RIR beginning at 10:30AM ET.

Ironically, it will be the Nationwide Series cars taking to the track at that time for practice. ESPN2 will be showing Skip Bayless holding Court on First Take while ESPN will be offering yet another hour of SportsCenter.

When the dust settles after Friday night, it will be interesting to gauge the fan reaction to this SPEED telecast vs. the regular NASCAR on ESPN TV team. Maybe, the NASCAR Fan Council just wanted a jump on this topic.

We invite your views on this subject. To add your opinion, just click on the comments butto below. This is a family-friendly website, please keep that in mind when posting. Thank you for taking the time to stop by The Daly Planet.