Does The Sprint Cup Series Banquet Belong On TV? 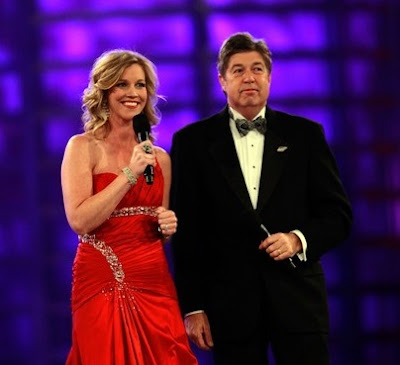 We had some wonderful comments on SPEED's coverage of the Sprint Cup Series banquet last Friday night from many readers. The opinions were all across the board. Not about the actual banquet, but about how it translated to TV.

Now that some time has passed, let's take a look at three scenarios for deciding what to do with that post-season function when it comes to television coverage.

Option one is easy to understand. Don't cover it. The argument in support of this choice is that the function is simply an evening designed for the teams, sponsors and others who have worked hard all season long in the sport.

The mainstream media at the event will provide pictures and clips of the festivities. SPEED will provide coverage on The SPEED Report. ESPN, FOX and others will provide stories and interviews as well. Option one is no TV at all.

Option two is what SPEED did this year. Basically, the attendees arrive and go into the ballroom. They get a greeting, a musical number and then an hour of dinner. It isn't until after dinner is completely done that the awards portion of the evening begins.

SPEED taped the arrivals and interviewed participants on the red carpet. Steve Byrnes and Jeff Hammond then hosted an hour show mixing those interviews with various edited features recapping the season. Several drivers stopped by the outside set to offer their reactions on that same topic.

This hour of content was used to bridge the time that the dinner was taking place. SPEED then joined the program inside the ballroom when the awards and additional entertainment began. It was a good effort, but oftentimes awkward due to the reality of the function.

So, option two is to keep things as they are, using the red carpet and interviews to fill an hour before joining the live awards and watching the drivers read their speeches. It was 12:52AM ET on Saturday morning when Jimmie Johnson finally appeared on SPEED to accept his championship earnings.

Option three is a combo platter. Use the NASCAR.com website to stream the entire function online live from start to finish for hardcore fans, including dinner. Not a big polished production like SPEED creates, but basic coverage of an event like NASCAR.com delivered for other events in Vegas and during the season.

That would let SPEED and the NASCAR Media Group do what they do best, record everything that goes on and edit it for a later airing. Let's say the following week SPEED sends NASCAR out with a bang by putting together a final evening or perhaps an entire day of the best of the year programs ending with the banquet.

One final note before you respond. The format of the Sprint Cup Banquet is not going to change. For those who enjoyed the combined Nationwide and Camping World Truck Series banquet on SPEED, the format of brief interviews in a talk show like setting is not going to apply. That's one key reason we narrowed our discussion down to three choices.

What do you think about how or even if the Sprint Cup Series banquet should be on TV now that you have seen SPEED's effort for this season? To add your opinion, just click on the comments button below. This is a family-friendly website, please keep that in mind when posting. Thanks for taking the time to stop by The Daly Planet.