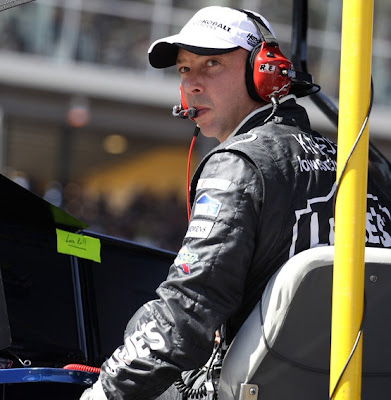 The evolution of NASCAR media coverage continued on Tuesday. The appeal of the penalties against the Hendrick Motorsports #48 team was being held at the NASCAR Research and Development Center in Concord, North Carolina.

This facility is right down the street from SiriusXM/MRN Radio, the Charlotte Motor Speedway, the SPEED studios and many NASCAR race shops.

Last year, a small group of media casually interacted with a small group of fans on the social media service Twitter as the reporters waited in the same spot for results of an appeal hearing by Richard Childress racing.

As we have documented repeatedly, this year the NASCAR social media scene has exploded. There was no better example of this than fans, teams and drivers interacting with the media group assembled throughout the day on Twitter.

SPEED took the new step of providing live cut-ins throughout the day. Danielle Trotta anchored from the studio and Wendy Venturini was the reporter on-scene. ESPN also had a satellite truck at the R&D Center and reporter Marty Smith was joined by analyst Tim Brewer for a liveshot in the 3PM NASCAR Now program.

The erosion of the wall between the NASCAR media and fans is basically complete. Imagine several years ago having media members sending pictures of each other sitting in the R&D Center parking lot out to fans. Ultimately, there was a daylong informal media question and answer period about the #48 situation.

With social media it's not really about who tweets, but who watches. When something like this appeal is in progress, Twitter is watched by all kinds of folks connected with NASCAR. Since Brad Keselowski's Daytona Twitter adventure, it's also clear that the sport is surrounded by a very active group of Internet-savvy fans. You have to wonder just how many of them kept an eye on this situation during the day.

Even though the media stakeout was fundamentally boring, it allowed Twitter users who are NASCAR fans a behind the scenes look at a unique part of the sport. Media members on-scene were kind enough to continually update everything from weather conditions to the lunch menu.

When the afternoon bell rang that a decision was in, it was Twitter and those very same reporters who passed along the information long before it made it to TV or radio. Social media once again confirmed that it has a fundamental value in terms of speed when used correctly.

The ability of any fan to interact with a NASCAR reporter, driver or team is still rather amazing. Twitter and Facebook have become the home to an incredible amount of NASCAR content that is changing the way younger fans view the sport.

These social media platforms have also given the remaining full time NASCAR media members a new lease on life. Instead of being cornered into an existing corporate website, the freedom to publish directly on Twitter and Facebook has changed everything.

NASCAR now has 2.7 million Facebook "likes" and over 500 thousand Twitter followers. While it might be high-profile moments like Keselowski tweeting at Daytona that draw the mainstream news coverage, it's the informal and spontaneous happenings like a media stakeout in the R&D Center parking lot that continue to shape just how social media continues to change the sport on almost a daily basis.

We welcome your comments on this topic. Below is posted the official statment from NASCAR on the appeal. This is what NASCAR sent to media members when things were complete. Thanks for stopping by The Daly Planet.

The penalties concern Section 12-1 of the NASCAR Rule Book “Actions detrimental to stock car racing;” Section 12-4(J): “Any determination by NASCAR Officials that the Race Equipment used in the Event does not conform to NASCAR rules detailed in Section 20 of the NASCAR Rule Book, or has not been approved by NASCAR prior to the Event;” and Section 20-2.1(E): “If in the judgment of NASCAR Officials, any part or component of the car not previously approved by NASCAR that has been installed or modified to enhance aerodynamic performance, will not be permitted: Unapproved car body modifications.”

This stemmed from an opening day inspection for the NASCAR Sprint Cup Series at Daytona International Speedway on February 17, 2012.

The original penalties assessed prior to the deferral were:

Upon hearing the testimony, carefully reviewing the facts and historically comparative penalties, the unanimous decision of the National Stock Car Racing Appeals Panel was to uphold the original penalties assessed by NASCAR.

The Appellants have the right under Section 15 of the Rule Book to appeal this decision to the National Stock Car Racing Chief Appellate Officer.