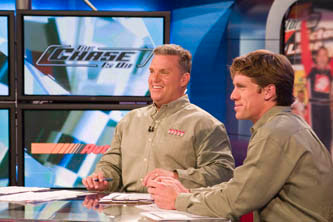 The small eleven week The Chase is On series on SPEED continues that network's thrust into building support programming around the NEXTEL Cup Series. Already originating hours of live and taped programs each race weekend, Steve Byrnes and Carl Edwards combine to co-host The Chase is On from SPEED's Charlotte studio.

Edwards has prior experience on this series, and seems to be getting much better at his on-camera presence. This is no small task for someone who is working full time at a profession other than television. Learning the tricks of the trade takes time in TV, just as in racing.

One thing Edwards has on his side is Steve Byrnes. Now firmly established as one of the most popular and versatile TV personalities on the NASCAR scene, Byrnes is very generous when it comes to helping NASCAR drivers work their way through the television landscape.

On Trackside, as well as hosting various practice and qualifying shows, Byrnes clearly sets a casual and relaxed tone. This allows the panelists and guests on SPEED to understand they are working in a comfortable environment. That human dynamic is critical on-camera, and that unblinking eye does not lie when things are awkward or unpleasant.

This series runs through The Chase and includes interviews and news about the points, upcoming races, and general issues of the day. SPEED returned this series to allow a preview show to focus specifically on the issued associated with this recently changed points format.

For hardcore fans, this brings some additional clarification and understanding of exactly what is going on in the next race. Edwards calm and focused demeanor works well in this studio format, and the veteran Byrnes knows just how to handle this young man. The result was fun, informative, and no doubt gave Carl Edwards fans something else to add to the DVR every week.

The next show in this series airs September 13th at 8PM Eastern Daylight Time and features a preview of the New Hampshire event.

ABC's "NASCAR In Primetime" Finally Gets It Right

Episode #4 of NASCAR in Primetime took to the air Wednesday night on ABC. This five part series is produced by ABC News, and is completely original in its content. No ESPN production assistance was involved in this project.

In a sport dominated by cable TV networks and NASCAR's own production company called NASCAR Images, this attempt at capturing the excitement of NASCAR racing in a pseudo-documentary style and bringing it to primetime is admirable.

In the first three episodes of a semi-continuing story, viewers have been given glimpses of several drivers behind-the-scenes. They have also been treated to race footage, and told the story of the selected drivers at a specific race. This week the Coca-Cola 600, which took place back in May, was featured.

Last week, NASCAR in Primetime used Talladega Superspeedway in Alabama to feature a lot of what many people in this country believe NASCAR is all about. Basically, lots of men doing some heavy drinking and their intoxicated female companions pulling their shirts up a bit too high.

Maybe that does not happen a lot on West 66th Street in Manhattan, but anyone who has been to the Kentucky Derby, the Indy 500, or even OzzFest has already seen how some folks blow-off steam in exactly that manner.

Unfortunately, for the real NASCAR fans that little slice-of-life moment ruined the program and alienated a lot of them for the rest of the series. Just another bunch of New Yorkers putting the Yankee thumb in NASCAR's eye again they thought.

That theme has been heard a lot over the years when the New York or Los Angeles TV folks stop-by and try to figure out why all this ruckus about NASCAR is going on.

In this case, those viewers who chose not to watch episode #4 missed what is clearly the best show of the series to this point. Finally, ABC News got it right and decided to focus on the people, the racing, and the circumstances that happen when the two are mixed. This time, they let the pictures and the people tell the story.

Integral to this series has been the raw sound and interviews from Johnny Sauter and his girlfriend, Cortney Owen. Originally tagged as an angry man and a dizzy blond, this episode finally revealed them both to be quite different.

Many young men can relate to trying to cope with, and possibly avenge, the difficult life circumstances faced by their father. Perhaps, whatever becomes of Sauter, the fact that he has a partner in life who understands this burden, and the dilemma that comes with it, is a potential lifesaver. Despite her youthful style of talking, Owen has a wisdom and understanding far beyond her years.

On the other side of the coin is the well-known comedy act of Kevin and Delana Harvick. Previously featured on several NASCAR "reality" shows on SPEED Channel, this duo is just a blast, and has one of the most unique marriages on the planet.

ABC News deserves credit for just stepping-back and letting these two talk about various topics that are both professional and personal. They did not paint either of these two into a corner, and that made their story work.

The actual racing itself was inter-woven quite well at last with the interviews. Charlotte is always interesting, and this time was no exception. The top dogs like Tony Stewart and Jimmie Johnson were shown to be in a class of their own, but the absolute random nature of NASCAR racing was driven home by their finishes.

There is something eerie about a NASCAR garage area after a race, where everyone present did not win. The one winner is over in Victory Lane, loudly having a blast. Meanwhile, the real stories of the race play-out in the harsh reality of darkened and empty garage stalls and NASCAR team "haulers" loading-up for the long ride home without a trophy. This episode showed the fragility of men driven to win, and win only, for a wide variety of reasons.

ABC deserves credit for leaving they hype of episode #3 in the rearview mirror. No dramatic music swelling right before a crash, no wives talking about the mortality of their husbands, and absolutely no manufacturing of the reality of racing through lots of editing. This style of up-front and open storytelling was done very well, and let the viewer be the judge of those who chose to participate in the program.

The final episode airs next Wednesday at 10PM Eastern Daylight Time on ABC, and there is no word if these programs will eventually re-air on ESPN Classic.

The Daly Planet welcomes comments from viewers. Simply click on the COMMENTS button below, or email editor@thedalyplanet.tv if you wish not to be published. Thanks again for taking the time to stop-by, and leave your opinion.