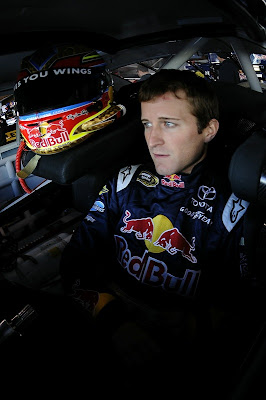 UPDATE: There will be no more "Your Turn" posts. Feel free to add your post-race comments right here.

The good news is that we can now use one post to host all the NASCAR TV comments on the day. The bad news is the reason why. Numbers are down all over the place for NASCAR, including online blogs like this one.

The day starts with Nicole Briscoe and NASCAR Now on ESPN2 at 9AM. She has Marty Smith on-site in Martinsville, VA. It should be interesting to see how much focus of this hour goes to the unraveling of RPM and the recent rumors of impending demise.

As we reported, Smith minced no words Friday in reporting that no mechanics had left RPM, that Roush-Fenway had been paid in full by RPM and that Kasey Kahne did not leave RPM being owed any money. These facts were completely the opposite of reports on Thursday from Race Hub's Bob Dillner.

NASCAR RaceDay is up next at 10AM with two hours of news and interviews. Saturday morning, SPEED telecast one hour of Sprint Cup Series practice avoiding the Kahne and RPM story entirely. Only in the last few minutes was it even mentioned.

While Race Hub is produced in-house by SPEED, the other programs from the track are produced for SPEED by the NASCAR Media Group. How else can it be explained that Kahne driving onto the track in the Red Bull car was not the first image viewers saw on Saturday morning? Instead, the TV team did everything possible to dance around the huge elephant in the middle of the room.

John Roberts hosts RaceDay, but the meat of the program is provided by reporters Wendy Venturini and Hermie Sadler. Since Sadler is driving in the race, he will be of limited value as far as news gathering is concerned. It's up to Venturini to provide an updated overview of the entire RPM story.

Perhaps the person with the most interesting perspective is going to be RaceDay panelist Kyle Petty. Teamed with the hootin' and hollerin' cheerleader Kenny Wallace, Petty actually hosted the RPM merger press conference live on SPEED way back when.

Petty has never been one to mince words and his feelings about the truthfulness of RPM and the current situation could make for the most memorable TV viewing of the day.

Allen Bestwick is next as once again the NASCAR Countdown show has been moved over to ESPN2 at noon ET. Along with Rusty Wallace and Brad Daugherty, Bestwick has a lot of ground to cover with all the news and silly season changes unfolding this week.

Marty Reid leads Dale Jarrett and Andy Petree into yet another Chase telecast over on ESPN at 1PM. On this tiny track, ESPN cannot use side-by-side video boxes for live racing or endless in-car camera shots. Reid cannot simply work off the TV monitor and needs to stick his head out the window and call the actual race as it happens. This week it has to be different.

It's all about pit strategy on Sunday and Dr. Jerry Punch and the pit reporters are going to have to play a major role in the telecast. The intensity is high at this track and there are no doubt going to be some upset drivers before the day is done.

ESPN will offer an extended post-race before the three hour block of The Speed Report, Victory Lane and Wind Tunnel gets underway on SPEED at 7PM.

This post is going to host your comments on NASCAR's Sunday TV from start to finish. To add your TV-related opinion, just click on the comments button below. This is a family-friendly website, please keep that in mind when posting. Thanks for taking the time to stop by The Daly Planet.