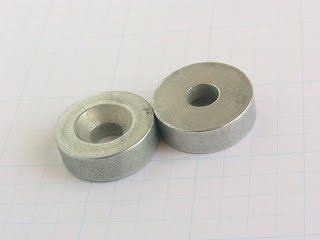 NASCAR has announced the fines, Joe Gibbs has offered his response and the stories have all been published. But for the TV guys, some loose-ends are still waiting to be tied-up where "magnet-gate" is concerned.

Wednesday on NASCAR Now reporter Marty Smith spoke directly with Gibbs but left the outstanding issues still on the table. Gibbs politely declined to fill-in the details of who did it or how they got it done.

Ryan Burr will be handling NASCAR Now this week and Steve Byrnes and the SPEED crew will be returning on Friday for practice and qualifying coverage.

Chasing this issue has become a TV item since several ESPN commentators speculated that perhaps the drivers participated in the placement of the washers/magnets in the Nationwide Series cars after the race. That drew a strong reaction from Stewart on his Sirius radio show and a "no comment" from Logano's camp.

The Gibbs response has been consistent in saying that a very small group of employees were at fault for this incident. They were also very definite in their insistence that neither driver was involved and the incident took place after the drivers had exited the vehicles. In fact, JGR is going to appeal the sanctions imposed on the two drivers in question.

Dale Jarrett on Wednesday said on ESPN2 that he did not believe the drivers were involved, but could not offer any additional information. The reason is that none is available. Visions of a rogue crew member diving head-first into the two vehicles to stick a magnet on the firewall are swirling on the Internet.

Stewart offered the opinion that anyone trying to reach that spot with the cars configured for MIS would have to be lowered in head-first and it would still not be easy. His main point was that the effort made no sense since other Toyota's were being put on the dyno as well. He seemed mildly amused by the incident, but upset once again with ESPN specifically using his name when trying to assign blame.

As both ESPN2 and SPEED continue to follow this story, the specifics are bound to eventually emerge. For now, it seems to be a mystery as how crew members were allowed inside a vehicle headed for the dyno and given access to the throttle cable.

SPEED will be on-the-air from 10AM through 7:30PM on Friday and NASCAR Now is seen every day on ESPN2. Sooner or later, "magnet-gate" will be explained to the fans.

The Daly Planet welcomes comments from readers. Simply click on the COMMENTS button below and follow the easy instructions. The rules for posting are located on the right side of the main page. Thanks again for stopping by.
Posted by Daly Planet Editor at 8:44 PM 64 comments: 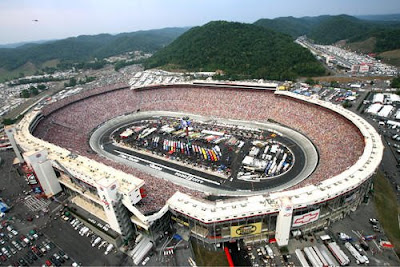 This is a big night for SPEED as they get one shot to present a Truck race in prime-time on a Wednesday. There should be quite a different audience tonight as casual viewers surf the dial for new TV shows to watch. Wait until they see Bristol.

Wednesday is going to be a great opportunity for Krista Voda to introduce this series to new viewers as she hosts the pre-race show called The Set-Up at 7:30PM. Voda handles this duty alone and is usually standing at the head of the starting grid. It is always up-close and personal.

Stories tonight include Sprint Cup Series Champ Jimmie Johnson taking his first ride in a Craftsman Truck. Thanks to some behind-the-scenes help from Chevy, Johnson will be sitting in the Truck owned by Randy Moss, the NFL player. Moss Motorsports recently made its debut and the story of how all that came about has still not been fully told. It should be interesting to see who is pitting the truck and what engine Johnson has under the hood.

NCTS veteran Johnny Benson is on-a-roll this season and his consistency has resulted in multiple wins. Benson grew-up on short tracks and for those of us lucky enough to see him during his ASA days know he will be a threat at Bristol as well.

The SPEED pit reporters Ray Dunlap and Adam Alexander will also be along to update the news of the week, including some interesting names in the race. ARCA's Norm Benning, Red Bull's Scott Speed, open-wheeler Patrick Carpentier and 19 year-old Tayler Malsam who is making his NCTS debut and hails from Seattle, WA. Malsam lists his favorite band as Slightly Stoopid and one of his hobbies as pyrotechnics. Both of those fit in perfectly with Bristol.

At 8PM, the action switches over to Rick Allen to call the play-by-play from the announce booth. He will be joined by Phil Parsons and Michael Waltrip. The action at Bristol is so fast that it is a challenge to keep things organized on-the-air. Allen does a good job and has worked with Parsons for many years. On the other hand, the sole purpose of Waltrip is to pump excitement into the telecast and that is certainly what he does.

Since the repaving, the track has allowed two clear lanes of racing. It will be interesting to see if the Trucks will keep things clean and race, or if cautions will result from multiple accidents like the Bristol of old.

This post will serve to host your comments about the NCTS race at Bristol on SPEED. To add your TV-related opinion, just click on the COMMENTS button below and follow the easy instructions. The rules for posting are located on the right side of the main page. Thank you for taking the time to drop by The Daly Planet.
Posted by Daly Planet Editor at 6:00 PM 122 comments:

Updated: Gibbs Penalties Out, "NASCAR Now" At 5PM On ESPN2 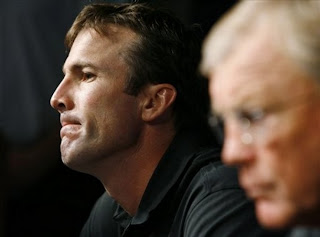 The news is out and it certainly is not good for Joe Gibbs Racing. Gone are crew chiefs Jason Ratcliff and Dave Rogers probably for the rest of the season. NASCAR likes to refer to these suspensions as "indefinite."

Drivers Joey Logano and Tony Stewart each lose 150 Nationwide Series points and both of the suspended crew chiefs are also going to be contributing 50 thousand dollars to the NASCAR Charity Fund. That is where the penalty money goes. In addition, JGR loses 150 championship owner points.

In a surprising twist that will probably be detailed later, five Gibbs crew members were also suspended indefinitely. Perhaps, those are the five that had access to the cars after the race and before the dyno test. That is pure speculation that will hopefully be updated by Ryan Burr and the NASCAR Now gang on ESPN2 at 5PM.

It would be important for Burr to clear-up any allegations made by ESPN's on-air announcers that either Logano or Stewart were responsible for placing the washers/magnets in those cars. That was the initial response, mainly because the normal procedure is for NASCAR Inspectors to prohibit any team members access to the cars being tested after the race. This will be a key element of the overall story. Were the drivers involved?

Update #1: The team members suspended were the car chiefs and engine tuners for each team, along with one crew member from the #18 car. Both Stewart and Logano are on probation until the end of the season, but the NASCAR press release says nothing about the involvement of the drivers.

Update #2: From Joe Gibbs - "We are, however, disappointed that NASCAR chose to place our drivers on probation, as they had no knowledge or involvement of this incident." That should help with the driver issue.

Update #3: "My name was used specifically in the incident," said Tony Stewart about the ESPN TV commentary. Nationwide Series Director Joe Balash was the one who told Stewart his name was used on TV. That means everyone is aware of this angle on the story.

The Daly Planet welcomes TV-related comments from readers. Simply click on the COMMENTS button below and follow the easy instructions. The rules for posting are located on the right side of the main page. Thank you for stopping by.
Posted by Daly Planet Editor at 11:31 AM 40 comments: