Lindsay Czarniak Back Again To Get Your Attention 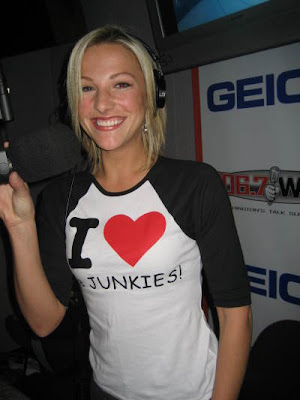 Before we go any further, The Junkies are a group of guys that have a morning radio show in Washington, DC. As a Sports Reporter for WRC-TV4 in the nation's capital, Lindsay Czarniak knows just how to handle the morning talk show crew. Sometimes, a T-shirt goes a long way.

In just a couple of days, Czarniak will begin her second season with the "summer six pack" of Sprint Cup races on TNT. Last year, her fresh face and hard work added another female presence to what had been a male-dominated position. That would be the NASCAR pit road reporter.

Czarniak follows-up on the work of Fox's Krista Voda and then passes the baton to ESPN's Jamie Little and Shannon Spake. Now, the Sprint Cup Series has at least one female pit road reporter for the entire season. Add-in the fact that Wendy Venturini handles the reporting duties for SPEED's RaceDay and the mix of females on-the-air is stronger than ever.

Czarniak is a James Madison grad, who followed-up with stints at two local TV stations in Florida. In DC since 2005, she has enjoyed a wide variety of assignments in the local area and beyond. TV viewers may remember her covering the Winter Olympics from Torino and even working pit road in the ARCA Series for SPEED.

This summer on TNT, Czarniak will once again be joined by a trio of experienced NASCAR reporters. Matt Yocum continues his work after handling pit road for the NASCAR on Fox TV coverage. Fresh from the motorcycle world is Ralph Shaheen, one of the best-known faces in the business. Finally, returning from last season is TV and radio veteran Marty Snider.

The only drawback to this group's task is that only Yocum has been on TV regularly this season in NASCAR. The rest of the gang will have to come up-to-speed quickly at Pocono, especially with all of the on-going NASCAR news.

Last year, Czarniak drew positive reviews for her ability to get-in and get the story whether it was on pit road or in the garage area. She had a local station reporter's "nose for news" and asked her questions directly regardless of who was being interviewed. That might be the result of being involved for only six races.

Fans can clearly see the different approaches the pit reporters use when they are full-time in the sport and often are associated with drivers and teams away from the track. Just like DW caught some flack for his Toyota connections, several pit reporters have a whole lot of NASCAR business going-on long after the racing is over.

The TNT package is here and gone quickly, last season leaving memories of endless promotions of TNT programs and one good Daytona race. This season, nestled among the Kyra Sedgwick and Holly Hunter promos should be a solid group of pit reporters ready to take-over the task of covering a sport in transition. Czarniak should be front-and-center.

The Daly Planet welcomes comments from readers. Simply click on the COMMENTS button below and follow the easy instructions. The rules for posting are located on the right side of the main page. Thank you for taking the time to stop by.
Posted by Daly Planet Editor at 8:00 PM 27 comments:

Do You Remember When? 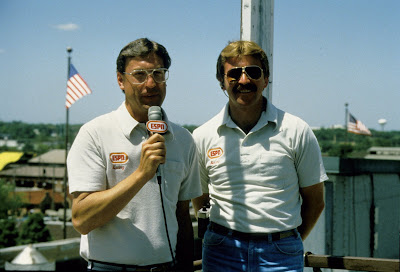 Bill France Jr. passed away on June 4th of last year. Viewers may remember that it was actually during a live race that the news broke. France lived in the footsteps of his father and worked hard in the sport. That is a picture below of a young Bill Jr. driving a grader on what would become the backstretch of Daytona International Speedway.

The picture above is what many NASCAR fans remember as their first exposure to the sport. Bob Jenkins and the late Larry Nuber used the new cable TV network ESPN to carry the message and the pictures of stock car racing far beyond the Southeastern United States.

This was a time in the sport when rough men and rough driving gave way to good competition and legendary rivalries. Mr. France kept a tight reign on the group with a small inner circle of executives, some of whom still work in NASCAR today. 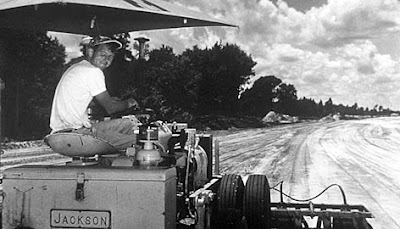 Mr. France was set in his ways and strong in his beliefs, but always listened to those with an opinion. New ideas came about after a lot of discussion and sometimes a lot of arguments. He led NASCAR through a transition period of national TV exposure and used the growth of cable TV to the advantage of the sport.

Granted, it was a different time and a different technology, but the leadership he provided kept a sport of very strong characters in control during his tenure. I thought it would be a good moment to remember him and get your thoughts. The Daly Planet welcomes comments from readers. Simply click on the COMMENTS button below and follow the easy instructions. The rules for posting are on the right side of the main page. Thanks for stopping by.

You can click directly on the pictures above to download the full size images.
Posted by Daly Planet Editor at 10:50 AM 8 comments: