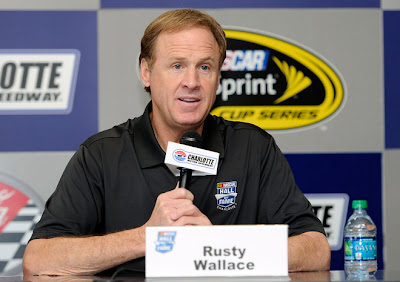 This week all three of NASCAR's national touring series head to the Dover International Speedway. Here are some news and notes about what is ahead.

Rusty Wallace will again be in the TV booth for ESPN's coverage of the Nationwide Series race on Saturday. Dale Jarrett has the weekend off. Wallace will join Allen Bestwick and Andy Petree to call the race.

After being selected for the NASCAR Hall of Fame, Wallace said he was stunned he was chosen before some of the older pioneers of the sport. Then, he went on to criticize NASCAR for having what he believes are too many Sprint Cup Series races.

"It’s the classic case of supply and demand," he said. "Too much supply and not enough demand. I love NASCAR. It’s been good to me, it’s made me a lot of money. I think it’s OK for me to give my opinion. I don’t think NASCAR would get upset about that. Maybe take four races off the schedule and increase that demand that means so much."

Click here to review a 2011 story where the president of Iowa Speedway discusses his desire to obtain a Sprint Cup Series race date. Wallace designed the track and is part of the ownership group.

After years of pushing for a change, this year the 5PM Camping World Truck Series race from Dover will be live on SPEED. In years past, this race was tape-delayed until Friday evening. Dover has no lights and while the intentions may have been good, the non-stop world of social media and digital communications makes tape-delaying a NASCAR race ridiculous. Positive move by SPEED to go live and even a better decision to replay the race that same night in primetime.

Dover is the final race of the season for the NASCAR on FOX team. For those of you complaining about Waltrip brothers overload, you better sit down. Darrell confirmed on Twitter that he will be working for SPEED during the TNT portion of the season and Michael will continue to provide color commentary for the Camping World Truck Series.

Both Kyle Petty and Larry McReynolds move away from the RaceDay program on SPEED when the TNT schedule rolls around. It would appear that Darrell will replace Petty during those six races and the buzz is that TV newcomer Matt Clark may replace McReynolds on the panel.

While we do know most of the pieces of the puzzle when TNT begins coverage, what we do not officially know is who will be hosting the six events from the infield. The name that keeps popping up is Krista Voda, although TNT has made nothing official at this point. There have been several faces in that chair over the past five seasons.

ESPN2's NASCAR Now series continues to air at 3PM, but at least the show has a nice new set. Without the Monday one hour roundtable show, the new set gives the program a polished look. Allen Bestwick was back to host early this week, but the afternoon shows are preempted Wednesday and Thursday.

FOX pit reporter Dick Berggren recently confirmed that this will be his last season working on TV. He made clear that he is not retiring, but will continue to work on his publishing interests, spend more time with the family and continue to be involved in the racing world.

Click here to see former ESPN and current NBC Sports Network announcer Bob Jenkins also confirming he is stepping aside after the IndyCar season. Jenkins has been in the motorsports TV game for over three decades. His voice will continue to be heard as the PA announcer for the Indianapolis Motor Speedway. Bob is a former co-worker and has always been a class act through thick and thin.

Any additional media news that comes along on Wednesday will be added to this post. We invite your opinion on the topics above. Comments may be moderated prior to posting. Thank you.
Posted by Daly Planet Editor at 7:00 AM 20 comments: