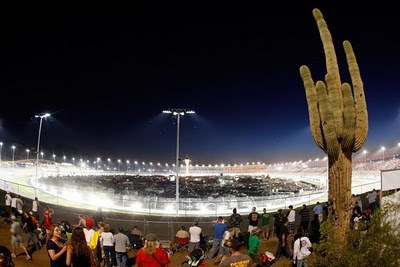 Only two to go for the trucks and Phoenix is the place for SPEED's Friday night coverage. It's the regular gang ready to go.

Krista Voda hosts The Setup pre-race show with Ray Dunlap and Adam Alexander as the reporters. Rick Allen is next to call the race with Michael Waltrip and Phil Parsons.

Once again this weekend, TV viewers will be able to compare the production style of SPEED with ESPN as both networks produce races from the same tracks. There is a very significant difference in styles and that has been a hot topic of discussion over the past several weeks.

PIR works well for the trucks with the unique track producing great racing. The coverage will once again be basic and focused on the racing. No infield set, only five race announcers and no cut-a-way truck.

This production team had been bringing quality NASCAR telecasts to fans for many years now on SPEED. With only two races to go, look for PIR to be an outstanding telecast.

This post will serve to host your comments on the truck series race from Phoenix on SPEED. To add your TV-related comment, just click on the comments button below. This is a family-friendly website, please keep that in mind when posting. Thanks for joining us on this Friday night.

The Nitro Circus Comes To Town 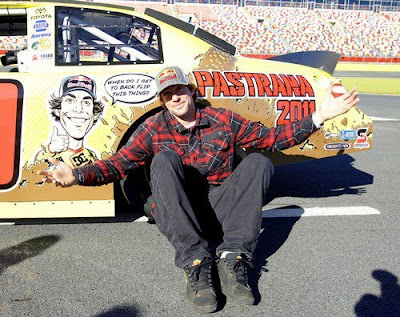 It certainly is interesting to watch a series written off as almost dead roar back to life. The Nationwide Series is now a playground for Sprint Cup Series stars who either want to have some fun on a Saturday or support a team in which they have a financial stake. Either way, the result is often horrible racing.

The Nationwide Series gets a fresh start next season with new cars and that has prompted several high profile types to step-up and play. Along with the continuing education of Danica Patrick and the new mega-team of Turner Motorsports, we heard Thursday that extreme sports star and Nitro Circus veteran Travis Pastrana is coming to NASCAR.

Pastrana, pictured above, may not be well-know to some NASCAR fans but it's a sure bet he is known to their children. This young man has blazed a trail through sports outside of the mainstream but strongly embraced by teens. Pastrana is someone who connects with young TV viewers in ways NASCAR can only dream about doing right now.

Add to this equation the fact that Michael Waltrip is probably the perfect owner for Pastrana and it all makes a lot of sense. The quirky Waltrip and the over-the-top Pastrana can bring some much needed national media focus to the Nationwide Series in a flash.

Even at the ripe old age of 27, Pastrana has a fan base that is global and a wonderfully crafted public relations and marketing image. This man is no fool and nothing happens in his life without a detailed sponsorship plan to go along with the project.

Pastrana's father Robert will also bring his personality to the table in the family sport of NASCAR. The elder Pastrana is a native Puerto Rican and a veteran of the US Marine Corps. The cross-over appeal of Travis in so many ways is simply huge.

NASCAR TV is going to love Pastrana because he is the polar opposite of Danica Patrick. Rather than speaking in carefully scripted interviews and supervised media availabilities, Pastrana is an enthusiastic shoot from the hip guy who loves every camera that turns his way.

Even though Pastrana is only doing seven races in 2011, his plans are for 20 races in 2012 with an eye on eventually becoming a full time NASCAR driver. There is little doubt that Pastrana has his eye on the prize and that prize is ultimately the Sprint Cup Series. His owner has a little experience in that world.

For those of you wondering if Pastrana can drive something with four wheels on pavement, click here. This is the type of offbeat and interesting project that Pastrana has done for sponsors like Subaru and Red Bull. These videos spread the news to YouTube users globally of both brand identification and extreme sports.

Click here for a peek at the new Pastrana Waltrip Racing website that includes links to Facebook and Twitter for information on this project. It certainly sounds buttoned up and brings with it just the kind of new blood that the Nationwide Series and the sport in general certainly needs.

We welcome your comment on this topic. To add your opinion, just click on the comments button below. This is a family-friendly website, please keep that in mind when posting. Thanks for taking the time to stop by The Daly Planet.