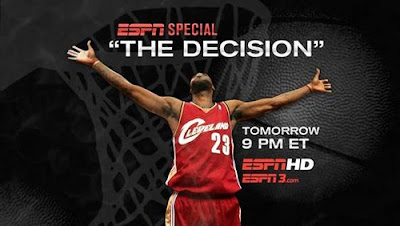 Needless to say, the vast majority of attention from the sports TV world will be on the rather amazing deal struck between LeBron James and ESPN.

This NBA player gets an hour of ESPN Thursday primetime on multiple television and online networks to simply indicate which team he will play for next season.

Sponsors are lining up to get ads in this program, the content of which cannot yet be explained or even imagined. Nike, Sprint, McDonalds, Bing and even the good old University of Phoenix will be seen running ads.

ESPN says they control the content and format, but the network spokesman continues to deny that ESPN knows LeBron's plans. All we know as the viewing public is that he has 44 minutes of primetime to say something that normally takes less than one. It should be interesting.

ESPN2's NASCAR Now has Thursday off as the network offers extended coverage of the US Women's Open golf tournament. That means SPEED is the only game in town and they are taking full advantage on the final Race Hub program of the week.

Tony Stewart will be John Roberts' guest as he hosts the program. Steve Byrnes will be doing a TV marathon for SPEED this weekend at Chicagoland Speedway and Krista Voda is handling the pre-race and pit reporting duties for the trucks in Iowa. Look for them to return to the Hub next week.

While Stewart is a good guest, it is Mark Martin that may be making some news for an interview he recorded for the Thursday Race Hub show. The network released some memorable quotes in advance.

“This time next year, if nothing suits my fancy, then I’ll wait until something does,” Martin said in the interview. “Some of that’s driving and some of it’s not. I’m gonna do what I wanna do, and how do I know what I want to do a year and a half from now?”

“I had to quit following the sport because it kinda made me sick,” Martin said. “The media didn’t understand and didn’t get it and couldn’t seem to deliver the message correctly. They only delivered the message they wanted to deliver, which was sensationalized...it was disgusting.”

Well, you don't usually get that type of reaction from Martin. Things should be even more interesting due to the fact that SPEED's Randy Pemberton told Sirius NASCAR radio Wednesday morning that he believes Martin may wind-up on the Red Bull team next season and Kahne would be driving the #5 for Hendrick in 2010. Pemberton will be on Thursday's Race Hub reporting from Chicagoland.

Rumors about Kenny Schrader returning to TV are true, but unfortunately it's only for one ARCA race Saturday night on SPEED at 9PM. Schrader is racing a truck at Iowa Speedway, so he happened to be in the neighborhood. Rick Allen may have his hands full with Michael Waltrip and Schrader together.

Speaking of Waltrips, this is Darrell's last appearance on SPEED for a while as Kyle Petty returns after this weekend now that his TNT duties are done. Friday, Waltrip calls Sprint Cup Series practice, qualifying and is a panelist on the Trackside show. Saturday, he joins NASCAR RaceDay with Kenny Wallace and John Roberts from the SPEED Stage.

TNT has reported a nice jump in TV ratings for Daytona. Here is some official information:

TNT had double-digit ratings, total viewers and household increases for its coverage of the Coke Zero 400. The network, airing the race in its signature Wide Open coverage which resulted in zero missed laps of green flag racing for the second the consecutive year, earned a 3.6 U.S. household rating, up 16% over last year.

We will update this post throughout the day with an new TV-related stories. In the meantime, please feel free to offer comments on these topics. Just click on the comments button below. Thanks for stopping by!
Posted by Daly Planet Editor at 5:00 AM 21 comments: