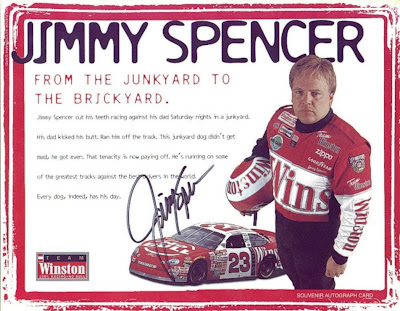 It's been a tradition for many fans during the NASCAR season. Tune in on Monday nights to see what SPEED had to offer. At one point, the network had a three hour block of NASCAR programming. Then, it shrank to just one. But, it was the right one.

The show that began as Inside Winston Cup Racing finally wound-up as This Week in NASCAR. After more than a decade of carving out a niche on Mondays, SPEED ended the series after the 2009 season. There was no goodbye, no highlight show and no happy ending. As with many changes in the television world it was awkward and left some hard feelings.

This Monday, SPEED unveiled the programming that would fill the 8PM hour. Several years ago, the network found that the NASCAR Media Group could use the footage from Friday and Saturday at the track to create an inexpensive thirty minute highlight show. SPEED called this Sunday morning program NASCAR in a Hurry.

The first half-hour of the new Monday night block is simply an extended version of NASCAR in a Hurry that includes Sunday footage. This new show even has the exact same title. With a single host at the track, the program is a rehash of the activities before, during and after the Sprint Cup Series race.

A tired Bob Dillner was the host. He was standing with the night sky behind him in Daytona. He lent his voice to introductions and what are called "bridges" that allow a highlights show to get from one piece to the next. The editors drew from SPEED shows like Victory Lane and Wind Tunnel as well as race footage and interviews.

The unfortunate part of this concept is that SPEED recently created Race Hub, a series that airs at 7:30PM Monday through Thursday. On this Monday, Race Hub aired much of the exact same footage and interviews featured on NASCAR in a Hurry.

Jamie McMurray was on Race Hub doing an live interview from Daytona USA and then magically went back in time to appear in the track's Victory Lane on NASCAR in a Hurry. While it may fit the budget, unfortunately this program wound-up making little sense in this timeslot.

The second half-hour featured the debut of Jimmy Spencer's new TV series called "What's the Deal." It might as well be called "The Rise and Fall of Mr. Excitement." Ray Dunlap drew the assignment of feeding topics to Spencer as the program's host.

The set of the series is supposed to resemble the Spencer family auto salvage business in Berwick, PA. "Welcome to the offices of Spencer Salvage," said Ray Dunlap. Unfortunately, he did not offer any more information. While some fans may know Spencer's personal history, the first episode of this show needed a much better introduction.

"You can call me all kinds of names, but I'm the fan's voice," said Spencer. He was called a curmudgeon by Dunlap, who said others described Spencer as a windbag, sourpuss or blowhard. We have seen Dunlap as a pit reporter and recently as a co-host on Race Hub. Unfortunately, it was clear from the start of this new program that he was lost.

Spencer does not know how to work on TV in this format. He does not speak in what are called "soundbites." TV likes things in small packages. Opinions make sense when they are kept to one topic at a time. Spencer is unstructured and relied on pro's like John Roberts and Steve Byrnes to keep him in check on his former programs.

Amazingly, this program also contained much of the exact same footage seen on both Race Hub and NASCAR in a Hurry. TV folks call it "B-roll" when they roll video over top of someone speaking. In this show, that was done far too frequently. The entire point of the series is to let Spencer speak directly to the fans.

It was clear from the start that Spencer and Dunlap were not in sync. Once Dunlap asked a question, Spencer went off on a rant. Some of the stream of consciousness offerings from Spencer were hilarious and some addressed serious subjects. The problem was, they were all lumped in together and Dunlap could not sort them out.

This program followed the tried and true formula of The NASCAR Media Group. Instead of featuring the new content being provided by those on the set, the programs are a whirl of racing footage, recorded interviews and slick production. It was precisely this problem that doomed This Week in NASCAR.

If Spencer is there to talk, let him talk. Just give him an experienced host whom he respects. Someone who can offer direction without criticism. Dunlap began to argue points with Spencer and the show was doomed. Let the fans give Spencer feedback.

This show desperately needs a Twitter account, a Facebook fan page and a link for fans to submit videos. Only by allowing Spencer to connect directly with the fans does the series stand a chance. It's a great opportunity for NMG and SPEED to step out of this rut of rehashing race highlights and open up to social media, fan videos and Facebook interaction.

Until Spencer is surrounded with the right TV and media tools he can sit in his junkyard and yell for thirty minutes every Monday night. The problem is, no one can yell back at him.

TDP welcomes your comments on these topics. To add your opinion, just click on the comments button below. This is a family-friendly website, please keep that in mind when posting. Thank you for taking the time to stop by The Daly Planet.
Posted by Daly Planet Editor at 9:00 PM 43 comments: 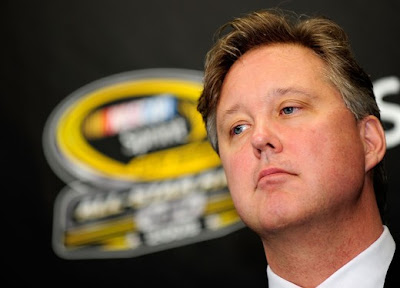 Brian France has a new video posted over at Fox Sports. Looks like early indications are that NASCAR is going to try more than ever to control his media exposure and craft the message they want delivered to the public. Click here to see the video.

SPEED has confirmed that the last two programs in the new NASCAR Monday night TV block will be The Racing Chef with Nicky Morse and Fast Track to Fame. Morse will visit tracks and interview folks, including drivers, about what they eat on the road. Click here to read the audition criteria for Fast Track to Fame. Happy to have your comments on this topic.

Chad Hurley, the high profile founder of YouTube and primary backer of the USF1 effort is today rumored to have withdrawn his support and the entire effort may be done. Click here for an updated article on this topic. SPEED's Peter Windsor is an owner of the team and the announcement of a Charlotte, NC based Formula 1 effort was highly publicized by the network. The SPEEDtv.com website has nothing posted on this topic.

Finally, did you see Jamie McMurray on his whirlwind TV tour? Started out in Daytona on Monday morning and continued through Tuesday in NYC after stops that included Letterman, Regis and Kelly and SPEED's "Race Hub." Ironically, many Monday shows on ESPN from PTI to Around the Horn ripped NASCAR and Daytona for the pothole problem. Feel free to offer your opinion about their opinions.

More topics will be added to this post as the day rolls on. Click the comments button below to add your two cents!
Posted by Daly Planet Editor at 12:25 PM 26 comments: