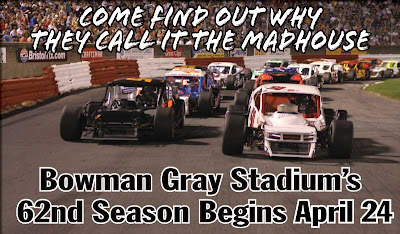 Update: Great fan comments on this post. What a mixed reaction to this first program. No ratings info from History Channel, series returns Sunday at 10PM ET.

When entertainment TV takes on a reality topic, the results are usually interesting. Sunday night, the History Channel offered Madhouse. This program was edited from footage obtained during the 2009 racing season at Bowman Gray stadium in Winston Salem, NC.

It was produced by Triage Entertainment from Los Angeles, CA. Their credits include The Next Iron Chef, Home for the Holidays with Faith Hill and The Mentalist.

Madhouse is called a "docusoap." This hybrid word gives the production company and the TV network a very wide berth in producing the series. Basically, it puts right up front the fact that the series is based on real events that take place. In this case, a summer of racing at Bowman Gray. That would be the "docu" portion.

The wide berth comes with the admission of the "soap" part. From the start of the first episode, it was painfully obvious that a script was involved. It may not have contained specific words for the participants to say, but it was certainly clear that situations were staged and conflict was emphasized.

The goal of this type of series is to get viewers involved and keep them coming back. The premise of Madhouse is not the racing, but the off-track feuds and family conflicts that overshadow the action on the track. To some, this is a travesty as the sport of short track racing is much more than just animosity.

Casual viewers and perhaps those never exposed to racing are almost certainly going to be drawn in by this strange mix of family conflict that seems to be played out at high speeds on a racetrack. Painted as rednecks and compared to the Hatfields and McCoys, the end result was certainly not pretty.

Triage Entertainment made sure to include the angry fans flashing the middle digit. The audience seemed to be there for the fights, not the racing. Compared to gladiators, the winner's pit crew ran down the track after the race screaming "Kiss it, kiss it" to the fans. It was not a pretty picture of Americans.

The voice that tied the program together was a local radio DJ who seemed very clearly to be reading a script created long after the racing footage had been shot. Something had to be done by the producers to create a theme. In this episode, it was that the entire town was excited for this family rivalry to resume.

Madhouse is certainly not for everyone. Opinions were varied even after the preview of the first episode was seen. After opening with footage of one driver ramming his race car repeatedly into a stopped car on the track, this first show closed with a montage of violence off the track.

Profanity, fist fights and insults were used in the closing minutes to entice TV viewers back next week for more. Little of the actual racing, the mechanical aspects or the positive side of the sport was shown. It seems that is exactly how the producers and the network intended it to be.

Here are some early comments from media members:

Shawn Courchesne of The Hartford Courant: Madhouse doesn't paint a picture of short tracks. It doodles a caricature portraying the sport as entirely unkempt and disgustingly violent.

Dave Moody from Sirius Speedway and MRN Radio: Is it just me, or has the first 15 minutes of Madhouse already set the sport back 50 years? Madhouse is an embarrassment to the sport.

Jade Gurss of SPEEDtv.com: My impression of the first episode of Madhouse? Two words: Red. Neck.

Alan Cavanna, a Charlotte area TV journalist: It's a show about short track racing in North Carolina. Were you expecting the wine-and-cheese crowd?

RyanMcGee from ESPN the Magazine: Watching last night's "Madhouse". A lot of folks are angry over it, but I've been to Bowman-Gray a lot. Love it there. This isn't a stretch.

Time for you to offer an opinion on this first program and how this series makes you feel as a race fan? To add your comment, just click on the comments button below. This is a family-friendly website, please keep that in mind when posting.

Thank you for taking the time to stop by The Daly Planet.
Posted by Daly Planet Editor at 10:00 PM 48 comments: 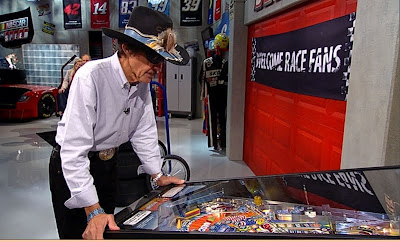 The last time we discussed SPEED's Race Hub , the program had ended 2009 on a high note. Hustled onto the air during the Hall of Fame selection week, Race Hub looked goofy and amateurish at the start.

Too many hosts, too many guests and too much acting did not strike a chord with NASCAR fans. Luckily, the production team also recognized these problems and made some wholesale changes. By the time November rolled around, Race Hub had hit on a comfortable formula that featured conversation and analysis.

During the final weeks of the season, Race Hub hit full stride by combining the network's NASCAR experts with drivers and owners in the studio. The drivers were not shy about expressing their opinions and the analysts provided the topics to stir things up.

This season the Race Hub studio has barely changed. For some reason, SPEED continues to have two anchors host this short thirty minute program. With only slightly more than twenty minutes of actual content, a single anchor could easily handle the format and interviews.

Perhaps, a part of SPEED's fresh approach to NASCAR is a potential expansion to one hour versions of this program. There is little doubt that with the major team shops, top drivers and the majority of the stock car racing industry located nearby, SPEED has an advantage they can put to good use.

Race Hub airs at 7:30PM Eastern Time and this season SPEED listened to the fans and added an 11:30PM Eastern/8:30PM Pacific Time re-air of each program. The series runs Monday through Thursday, filling the days when the sport is back home each week before heading out to the next race.

On this first show, Race Hub featured an interview with Lee White from TRD, comments from Fox's Larry McReynolds and a conversation with IRL analyst Robin Miller. While the line-up was great, each of them could easily have continued their racing conversations and let this show fill an hour of air time.

In three weeks, Race Hub gets a partner as ESPN2 begins the NASCAR Now series once again. On the air since 2007, NASCAR Now starts earlier at 5PM and will be covering many of the same stories SPEED will present on Race Hub.

Watching these two NASCAR TV series jockey for guests and interviews should be interesting. NASCAR Now hits the air first and has the extensive resources of ESPN. Meanwhile, the SPEED studios sit just a quick ride from most of the major team shops and offers national TV exposure later in the evening for drivers, teams and sponsors.

Race Hub will use John Roberts, Adam Alexander, Randy Pemberton and Rick Allen as hosts during this first week. Danica Patrick will be the featured guest on Tuesday via satellite from Indy. Jeff Gordon's crew chief Steve Letarte stops by the studio on Wednesday as does Scott Speed on Thursday.

It's nice for fans to have more NASCAR TV this season and a tip of the hat to SPEED for returning this series after its limited run in 2009.

We welcome your comments on this topic. To add your opinion, just click on the comments button below. This is a family-friendly website, please keep that in mind when posting. Thanks for taking the time to stop by.
Posted by Daly Planet Editor at 6:30 AM 19 comments: