NASCAR Hall Of Fame And The Media 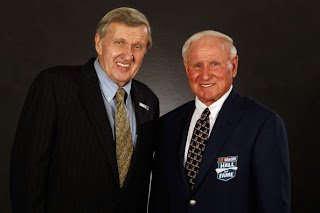 We have been talking for the last two days about the NASCAR Hall of Fame and how to jump-start interest in getting fans to visit. One topic that repeatedly arose was whether or not members of the media should ultimately be included.

The names of Darrell Waltrip, Rusty Wallace and the late Benny Parsons did not make the nomination list for their contributions to TV. All three had careers in the sport long before making the transition to working as television analysts. Working in the NASCAR media is not currently a criteria for nomination.

The topic today are those media personalities who contributed to the sport but never drove a car, owned a team or turned a wrench. While there are several outstanding personalities who come to mind, the example for me is the man pictured above on the left, Ken Squier.

A Vermont native, Squier helped to establish MRN, the Motor Racing Network, to get the radio coverage of NASCAR syndicated across the country. He motivated CBS to show the Daytona 500 from start to finish, something unheard of in those days. Needless to say, one snowstorm and one fight later the rest is history. He coined the term "The Great American Race" for that event and after starting the World Sports Enterprises (WSE) TV production company, remained deeply entrenched in the television development of NASCAR for decades.

It was said that Squier could make a wheelbarrow race sound exciting. On the air, Squier worked to drive excitement in the sport by focusing on the speed, the danger and the personalities of the drivers. For many of us, Squier's voice was the TV voice of NASCAR as we grew up. His life has been racing.

We would like to get your opinion on whether or not key media personalities from TV, radio and journalism should be included in the Hall of Fame selection process in some way. Names like Barney Hall, Chris Economaki and Dr. Jerry Punch come to mind. Would it make sense to ultimately honor these personalities in some way? Should a media section be added outside of the current selection process?

We invite your opinion on this topic. To add your comment, just click on the comment button below. Thank you for taking the time to stop by The Daly Planet.
Posted by Daly Planet Editor at 9:00 AM 32 comments: