The Most Interesting Racing TV Weekend in History 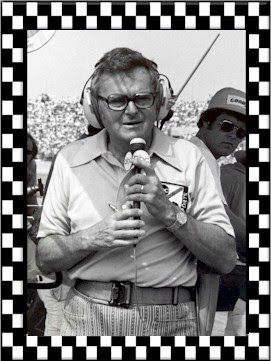 Things have come a long way since Chris Economaki and ABC's Wide World of Sports first began to show clips of NASCAR races in the south. While the sport is bigger, television still plays a key role. This weekend, the potential for TV viewers to "consume" the racing at Talladega is incredible. Between SPEED and the ESPN/ABC gang, there are more than twenty-four hours of live coverage scheduled over the three days of racing.

There have never been more big names in worldwide racing gathered in one spot for an oval racing weekend. Never. Hang-on to your recliners, and whatever you do...put the Friday ARCA race on your DVR or TiVo.

That's right, not the Trucks, not even the Cup boys out "chasing" the big money. Record the ARCA race for posterity and you will thank me on Monday. Here's the scoop.

ESPN will present a one hour NASCAR Countdown show and then the NASCAR NEXTEL Cup race on Sunday beginning at 1PM Eastern Daylight Time. Once again, the race will be produced by ESPN's crew and appear on the ABC broadcast network as an "ESPN on ABC" presentation. This is the first COT race at Talladega.

This week, there is no Brent Musburger, so Suzy Kolber will handle the NASCAR Countdown duties without a "show host." She will have alongside the "voice of the fans" Brad Daugherty and a possible guest. The ESPN crew of Dr. Jerry Punch, Rusty Wallace, and Andy Petree will be up in the broadcast booth. On pit road will be Allen Bestwick, Mike Massaro, Jamie Little, and Dave Burns. Tim Brewer will be in the Tech Center, and the dreaded Draft Tracker will also be ready to go. Sunday should be an "Aero push" kind of day.

The big switch this weekend is that SPEED once again steps-up to the plate and surrounds the weekend with eighteen hours of programming from the track. The network takes over practice and qualifying for the NEXTEL Cup Series, as well as the Craftsman Trucks. Then, they handle the ARCA race on Friday and the Truck race on Saturday.

Beginning Friday, the SPEED presence is big. The network takes to the air at noon, and plans to be live non-stop for nine hours. This encompasses five straight hours of NASCAR, and then the live ARCA race featuring a truly mind-blowing field. To end the day, there is going to be a one hour Trackside show, which should be wild.

Imagine tuning into an ARCA race and seeing Dario Franchitti and Jacques Villeneuve going wheel-to-wheel with Frank Kimmel and Norm Benning. This might be the most diverse stock car racing field in history. Youngsters like Josh Wise can turn their heads and see former Red Bull Formula-1 driver Scott Speed staring back. The field also includes Kerry Earnhardt and Erin Crocker, which certainly should add some spice to the mix. This is truly going to be a culture clash of the highest order. The racing starts at 5PM on Friday, with SPEED's normal ARCA gang on-hand.

For NASCAR practice and qualifying, SPEED is going with their on-track combo of Steve Byrnes on play-by-play, Larry McReynolds and Jeff Hammond as analysts, and Wendy Venturini and Bob Dillner on pit road reporting. John Roberts will host the NASCAR Live segments from the SPEED Stage.

In Craftsman Truck land, Krista Voda will host The Set-Up pre-race show. Rick Allen and Phil Parsons will call the race with Ray Dunlap and Adam Alexander on pit road. The Trucks roll at 4PM Eastern Time on Saturday.

Once again, ABC and SPEED go head-to-head with pre-race shows for the Sunday Cup race. RaceDay on SPEED kicks-off at noon, and NASCAR Countdown begins at 1PM.

Between the three races at Talladega this weekend, there is an incredible driver mix of American and foreign, young and old, experienced and rookie. There are drivers hunting a season championship, and others desperate to just win one race and save their careers.

Here at The Daly Planet, we are adding a new feature. Friday, there will be in-progress comments hosted for the noon to 5PM NASCAR on SPEED programming, then another post for the ARCA race (since there are so many NASCAR connections). Friday will end with a comments page available for Trackside Live, which we understand may be very interesting, to say the least. You never know who might just show-up on that program.

Saturday, there will be a live comments page for NEXTEL Cup qualifying, as well as the Truck race on SPEED.

Sunday, by popular demand, there will be a live RaceDay comments page, along with our usual Cup race TV coverage.

To say the least, it should be interesting. From The Daly Planet standpoint, it should make for an incredible three days of sports television. Get your keyboards ready.

We welcome comments from readers. Simply click on the COMMENTS button below, or email editor@thedalyplanet.tv if you wish not to be published. Thanks again for stopping-by and leaving your opinion.
Posted by Daly Planet Editor at 7:47 PM 25 comments: