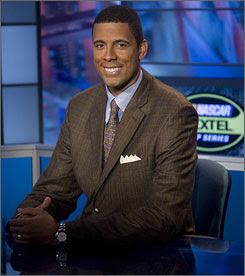 Dr. Jerry Punch and his veteran TV crew did their best to totally avoid the issue. After all, this is the same ESPN2 team that has been telecasting the Busch Series events since February, and this is September. Veteran NASCAR fans, however, knew that something was going to be very different.

Allen Bestwick hosted an abbreviated NASCAR Countdown with Brad Daugherty and then Clint Bowyer as guests. Bestwick was clear in his explanation that Bowyer was a fill-in, and that ESPN appreciated his help. There was a reason that the network needed someone in the Infield Studio for the second half of the show. Brad Daugherty had left the building.

The place he had gone was absolutely historic. While in real life it was only a short golf cart and elevator ride away, for NASCAR's TV legacy it might as well have been a rocketship ride to Mars. Brad Daugherty was heading for the NASCAR tower.

One could only imagine the looks on the faces of the Dover NASCAR fans as a seven foot tall black man in a business suit strolled over to the elevators in the Dover Racetrack Tower.

In a move that may have a much longer-lasting meaning than anyone on Saturday's broadcast acknowledged, Daugherty reached out...and pushed the UP button. At 3:15PM Eastern Time, things in "NASCAR TV land" would never be the same again.

The National Anthem played, the planes flew, and the engines started. Then, without pomp or circumstance, a picture appeared on the screen that had very deep meaning for many ESPN viewers of color. Jerry Punch, Rusty Wallace, and Brad Daugherty were about to call a live NASCAR race on national TV. Take a moment, and read that last sentence again.

While most fans are still working to understand the new role that ESPN has put Daugherty in this year as "the voice of the fans," Daugherty himself has made the most of this opportunity. On this day at Dover, his hard work this season came to fruition. Not only did Daugherty fit in, but he had done his pre-race homework and came on-the-air with all the right information.

Last week, Daugherty had a high-profile difference of opinion with both Dale Jarrett and Rusty Wallace on the NEXTEL Cup edition of NASCAR Countdown. There was no doubt that both DJ and Rusty were struggling to understand why this former College and NBA All-Star was telling them how things in "NASCAR land" should be. Needless to say, it was good TV and got better when Daugherty stuck to his guns and did not back down.

This week, many viewers thought that the friction between Daugherty and Wallace might come into play once again. Nothing could be further from the truth. As the race progressed, Daugherty used his technique of politely asking questions to draw even more racing knowledge and opinions from Wallace than we normally see on his broadcasts.

One key to this being effective is that ESPN2 laid-off the multi-sport cut-ins, the Infield segments, and almost all the other production elements that have been driving NASCAR fans nuts all season. Tim Brewer in the Tech Center was absolutely quiet. For once this season, fans got to watch a race and nothing else. It was great.

Dover is an action track, and the Busch Series guys were putting on a great show with intense racing and lots of contact. Carl Edwards was running away with the point standings, and at this time of the season there were a lot of drivers in the race with something to prove, and nothing to lose.

ESPN used their graphics effectively, and kept the camera angles wide enough to effectively deal with the "tickers" at both the top and bottom of the screen for the first time this season. The HD pictures and the crisp directing kept the viewers watching many more headlights than tail lights. Staying ahead of the action, capturing the replays from the right angles, and catching all the restarts except one made this telecast outstanding.

Throughout this telecast, the Producer aggressively "front-loaded" the commercial breaks whenever the opportunity presented itself. During every caution period, once the pit stops were done, the commercials hit the air. This race-long effort resulted in the network being able to show the last sixty or so laps commercial free.

What a time for a lot of very diverse elements to come together for ESPN's production team. Good announcing, strong commercial integration, and excellent directing helped to make this a memorable Busch Series telecast in almost every way. The network executives also deserve a pat on the back for allowing the post-race interviews to take place despite the fact that the race ran over into college football game time.

One element of this broadcast clearly remains at the forefront. Regardless of any other issues, Brad Daugherty stepped-up and made the most of this opportunity. What the network will choose to do with Daugherty in the future is still undecided. One thing is certain, diversity has come to the NASCAR broadcast booth, and it arrived with dignity and enthusiasm.

The Daly Planet welcomes comments from readers. Simply click on the COMMENTS button below, or email editor@thedalyplanet.tv if you wish not to be published. Thanks again for taking the time to stop-by and leave your opinion.
Posted by Daly Planet Editor at 6:55 PM 15 comments:

Krista Voda hosts The Set-Up, and the race is hosted by Rick Allen. Phil Parsons handles the color, and Ray Dunlap and Adam Alexander are the pit reporters.

To add your comment, simply click on the COMMENTS button below, and then follow the simple instructions. You do not have to leave your email address, there is nothing to join, and your comments post automatically. This is simply a forum for NASCAR fans to offer their opinion of the efforts of the NASCAR TV partners.

Thanks again for taking the time to stop-by and offer your opinion.
Posted by Daly Planet Editor at 6:45 PM 14 comments:

Allen Bestwick will host NASCAR Countdown with Brad Daugherty alongside in the Infield Studio. Daugherty will then transition up to the broadcast booth to join Dr. Jerry Punch and Rusty Wallace in calling the action. It will be Daugherty's first opportunity to call a race as an analyst.

Pit reporters are Mike Massaro, Jamie Little, Dave Burns, and Shannon Spake. Bestwick will remain in the Infield Studio, although there is no word about a potential guest that might join him. Tim Brewer continues to man the Tech Center.

This page will host the comments about the event. You can comment before, during, and after the race. Please read the rules for commenting posted on the right side of the main page. All non-TV related comments will be deleted.

To post a comment, simply click on the COMMENTS button below, and follow the simple instructions. There is nothing to join, and you do not have to leave your email address. This is a forum for NASCAR fans to talk about the TV coverage provided by the NASCAR TV partners. Thanks again for stopping by.
Posted by Daly Planet Editor at 9:46 AM 92 comments: