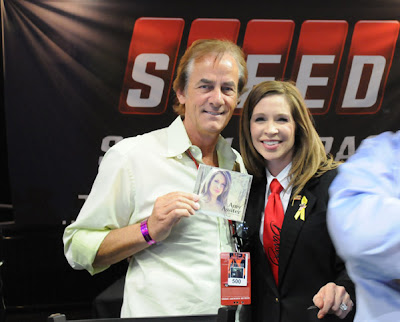 That is Arie Luyendyk and Barrett-Jackson's Amy Assiter posed at the Scottsdale auto auction with a copy of her charity CD. Amy and her husband Spanky are familiar faces to fans of the Barrett-Jackson TV franchise. Click here for Amy's website.

This weekend the auction is in Orange County, CA. Click here for a look at the cars that will be included. Perhaps it is a sign of the times that the line-up is not exactly stellar, but the six hours of live coverage on SPEED Friday will roll on despite the lack of top-notch product coming to the block.

What that coverage will roll right over-top of is the Sprint Cup Series live qualifying from Sonoma. One week after Dale Earnhardt Jr.'s win in Michigan, the qualifying session will be tape delayed until 11PM Eastern Time Friday night. There will be no online streaming of the live session.

The two topics that deserve attention when talking about this situation are Earnhardt and social media. This same situation happened to the series last season, but that was before Twitter and Facebook became such huge communication tools for the sport. It was also before Junior got another Sprint Cup Series win.

The beat writers on site will be live tweeting the qualifying as will the track, the teams and NASCAR. Fans will be checking the Internet for results that will be available instantly at a wide variety of websites. Now with NASCAR's two radio networks streaming online, the ability to keep information from the fans until the TV show airs is gone.

Earnhardt got a lot of media exposure this week, especially on the not too NASCAR friendly ESPN family of networks. NASCAR President Mike Helton made a point to get out in front of the media as well and proclaim Earnhardt as a Chase contender. Aside from an early practice, the next media focus on Earnhardt is the Friday qualifying session.

Next year NASCAR will reclaim its own digital rights that were sold to the Turner Sports group. Right now, the option exists for Turner to use NASCAR's own website to stream qualifying. This especially makes sense considering the actual race is part of the TNT coverage. Despite what some may feel is just common sense since the program is being fully produced as it happens, there is once again no online component.

In a word of multi-channel TV distribution and a growing live sports streaming industry, it's especially awkward for NASCAR to find itself in this position in the heart of the Sprint Cup Series season and with an especially good storyline underway with the emergence of Earnhardt. There are plenty of video pipelines to the fans, it's just a matter of finding one.

Saturday finds another live Barrett-Jackson telecast that will tape delay final practice coverage also into the 11PM timeslot. The full weekend NASCAR TV schedule is on the front page of The Daly Planet blog.

We invite your opinions on this topic. Comments may be moderated prior to posting.
Posted by Daly Planet Editor at 6:00 AM 30 comments: