Waiting For TNT To Advise Weber's Status For Daytona (Updated) 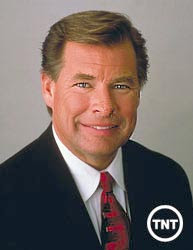 Update: New post is up addressing the TNT information that Weber has been released from his duties this season on TNT's NASCAR events.

Twitter and the Internet have been busy today talking about TNT's Bill Weber. Several reporters have suggested that Weber will not be in the booth for TNT's Wide Open coverage from Daytona this weekend. So far, TNT says that is speculation.

Official word from the TNT folks should come down soon as the time begins to shorten to get things in place with Weber or without him. As TV viewers know, TNT chose not to acknowledge Weber's absence on Sunday or even mention his name.

Things happen in life and certainly happen on the road in both the TV and NASCAR world. Weber has been involved in the sport for a very long time. Veteran fans may remember him as a reporter for Inside Winston Cup Racing on TNN back when Ned Jarrett hosted the show.

Once TNT gets things sorted out, TDP will be informed and will pass the information along to all of you about the upcoming coverage. TNT only has two races remaining, Daytona and then Chicago. Weber has been a part of that TV team since the new contract began in 2007. As they say in the business, stay tuned.

Update: 4PM ET and no info from TNT about Sunday's NASCAR announcers.

Final Tuesday Update: There will be no official information from TNT about this issue on Tuesday. Information is expected to be released later this week.

TDP welcomes your comments on this topic. Just click the comments button below to add your opinion. This is a family-friendly website, please keep that in mind when posting. Thanks for taking the time to stop by, we will update this topic continuously.
Posted by Daly Planet Editor at 3:25 PM 41 comments:

Mayfield And The Media About To Dance Again

The Tuesday story from AP reporter Jenna Fryer opened the door to the next chapter of the Jeremy Mayfield saga. It puts in serious doubt Mayfield's claims that a mix of prescription drugs and an over-the-counter sinus medicine caused his failed drug test.

Click here for the direct link to Fyer's story. Here are some excerpts:

NASCAR filed court documents Monday night that show an independent laboratory found an illegal substance in the urine sample that led to Jeremy Mayfield's suspension for a failed drug test.

The documents, part of NASCAR's response to Mayfield's lawsuit to have his indefinite suspension lifted, show that Medtox Laboratories in Minnesota tested both his "A" and backup "B" samples last week and "confirmed the presence" of a substance that is blacked out in the filing.

In Monday's filing, NASCAR claimed Mayfield provided a prescription for Adderall that he received from the "Vitality Anti-Aging Center & Medical Spa" in Hickory, and not his personal physician.

Mayfield had been using the media to carry his message of innocence to the public since the original suspension. "What if he is innocent?" said many journalists on the Internet, on TV and in print. Certainly, Mayfield's claims originally raised questions.

Currently, there is a gag order for both sides, who will meet in US District court on Wednesday. Mayfield is seeking an injunction that will allow him to return to racing during this process. That could be as early as this weekend in Daytona.

Tuesday and Wednesday should be interesting where this topic and the media are concerned. If you hear this disussion on the radio or see this topic appear on ESPN or another TV network, please tell us how it went and how both Mayfield and the sport were treated.

TDP is a TV and media blog. The Mayfield topic should slowly start to move from Fryer's AP report onto mainstream media like SportsCenter, ESPNEWS, and CNN. It may be a topic for Sirius Channel 128 as well as Internet podcasts like Rowdy and others.

We welcome your comments on the role of the media in the Mayfield issue. To add your opinion on this topic, just click the comments button below. This is a family-friendly website, so please keep that in mind when posting. Thanks for stopping by The Daly Planet.
Posted by Daly Planet Editor at 7:00 AM 23 comments: