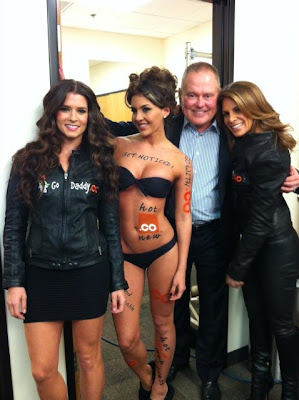 Well, another day and another big change. After working on the Kurt Busch story and then watching his public relations campaign across TV, radio and the Internet on Monday things got even more interesting on Tuesday.

SPEED scrambled to put together a thirty minute version of an updated NASCAR TV show Monday night. Under the SpeedCenter banner, Steve Byrnes and Adam Alexander checked-in with Busch himself, Kyle Petty, Bob Dillner and SPEEDtv.com's Tom Jensen. It was a fast-paced show that offered lots of perspectives.

Our post titled Dear NASCAR TV: You Left Us Too Soon seemed to make even more sense as this week has unfolded. Perhaps SPEED will decide to get busy and get a regular show on the air keeping NASCAR fans in the mix. It really cannot come too soon.

Meanwhile, back at the ranch a relaxed Jimmie Johnson appeared on the Colbert Report on Comedy Central. Click here for a video of his appearance. Johnson went to school on Jeff Gordon's entertainment TV appearances and has mastered the art of being a guest. The appearance was to promote his original video game for the Wii platform.

For those of you missing Danica in the off-season, Go Daddy founder Bob Parsons sent along the photo above of the Super Bowl ad shoot Go Daddy just completed. Parsons said he was also revealing the picture of his newest Go Daddy girl. Shortly after, both the tweet and the picture were deleted. Needless to say, not quite fast enough.

"After seven years, we have a good idea about what we can do that works for us and still be approved by censors – we know how to take it right to the very edge,” said Parsons. "Critics have suggested we submit ads solely to be rejected, but we don’t, we submit concepts that are fun, edgy and slightly inappropriate. That’s GoDaddy-esque and that’s what drives viewers to GoDaddy.com year after year after year."

What has changed for Go Daddy is that Danica is now a full time Nationwide Series driver and will also race in select Sprint Cup Series events starting with the Daytona 500. It should be interesting to see just how the NASCAR fan base reacts to her exposure and how she is treated on the air by SPEED, ESPN and FOX in February.

In the land of the DVR, ESPN2 has two mid-afternoon wrap-up shows they have to air as part of the NASCAR TV contract. Thursday at 3PM ET will be the season in review for the Nationwide Series and Friday at the same time on the same network it will be the Sprint Cup Series wrap-up. Normally, this is a NASCAR Media Group production so expect some good editing and dramatic narration.

The big racing event of the past weekend was the Snowball Derby from Pensacola, FL. Bob Dillner and his Speed51.com production team did the radio broadcast of the big late model race that featured familiar names like David Ragan, Steven Wallace and Johanna Long. Former Sprint Cup Series driver Bill Elliott's son Chase won the race at the ripe old age of 16.

The interesting development is that for many years this annual event has been trying to get a TV deal with SPEED. Immediately after the event, Darrell Waltrip sent along a tweet that said he would like to see this race live on SPEED in 2012. That means a lot and we will keep an eye on what happens down the road.

In a follow-up to the earlier TDP column about NASCAR TV, the Mike Ford move and the other pending big stories in the sport are adding to the push to get some NASCAR TV news coverage back on the air. In today's non-stop social media world, simply ending TV coverage of a sport going full-bore in December is not working.

It will be interesting to see if NASCAR.com, the Rowdy.com boys or even a local Charlotte area TV station steps-up and creates a video blog of NASCAR news to bridge the gap. It just might be a project that brings a strong return on the initial investment in terms of exposure, ad revenue and site traffic.

Finally, here is a little scoop from SPEED about an upcoming series relating to the Hall of Fame inductees.

The NASCAR Media Group and SPEED announce that a biography series of all five 2012 NASCAR Hall of Fame inductees will air on the network beginning this Friday, Dec. 9 with back-to-back shows featuring Cale Yarborough at 8 p.m. ET and Dale Inman at 9 p.m. ET.

There you have it, the TV and media notes so far this week. We will be adding any new information to this post, so check back with us please. It certainly has been an off-season to remember.

To add your opinion on any of the topics mentioned above, just click on the comments button below. We do not allow profanity, hateful speech or links posted in this section. Thanks for taking the time to stop by The Daly Planet.