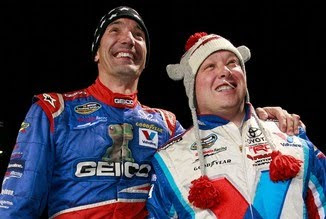 The familiar feel of the Camping World Truck Series TV package comes back tonight in Daytona. One face is gone, however, and a new one steps in.

Adam Alexander has left the truck TV package to anchor the new SPEED Center show back in Charlotte, NC. It will be Hermie Sadler stepping in to fill his shoes for the entire season. Sadler will also continue his reporter duties on the RaceDay show for the network as well.

Krista Voda kicks off another season as the host of the pre-race show and sometimes a pit road reporter. Voda's style has always meshed well with this series and she has proven her value to NASCAR and SPEED for many years.

Rick Allen will call the race with Phil Parsons. These two have been the core of the TV package in the booth for a long time. Tonight, Darrell Waltrip steps in because younger brother Michael is racing.

Yes, Michael has an in-truck camera and it should be interesting to see how the producer manages the contact between the two Waltrips. These two have been on a self-promotion tour this week and frankly, it's getting to be too much.

Ray Dunlap will be returning to anchor pit road along with Sadler. Watching these two this season should be fun. This is the first opportunity for Sadler to put his personal stamp on something for the entire season. This assignment is quite different than the scripted RaceDay program.

The same producer and director return as well, two guys who strive to produce old school television coverage that focuses on the racing and the drivers instead of fancy TV gizmo's and announcer personalities.

The field is packed with a ton of personalities from Kyle Busch to 18 year-old Johanna Long. No two-by-two drafting in this series. The trucks should put on a good show.

This post will serve to host your comments on the Camping World Truck Series race from Dayton on SPEED. To add your opinion, just click on the comments button below. This is a family-friendly website, please keep that in mind when posting. Thanks for stopping by. 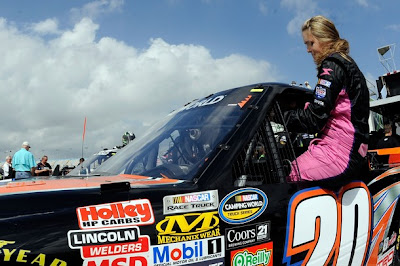 While the Sprint Cup Series still has the established superstars and the Nationwide Series boasts dynamite new cars, this weekend it just might be the Camping World Trucks stealing the TV spotlight in Daytona.

Throughout practice sessions and now after the Gatorade Duels, it's become apparent that the Sprint Cup Series is going to look like well, click here for a wonderful video of the chain races at Bowman Gray Stadium. Two cars, forever locked, until something bad happens. Motorsports ballet if you will.

We also saw a bunch of the Sprint Cup guys cross-over and do the same thing in the Nationwide Series cars. They were even switching partners in practice just to find out how the bumpers of the different manufacturers lined-up. The Nationwide Series race could also be a story of the best two-car drafters having a big advantage.

Meanwhile, over in truck land there is a whole lot of shaking going on. A ton of good drivers did not make the race, including Mike Skinner, Rick Crawford and Tayler Malsam. Ultimately, the starting grid for the race is an incredible mix of motorsports personalities.

While Austin Dillon capturing the pole might be expected, Ricky Carmichael and 18 year-old Johanna Long, pictured above, sneaking into the top five certainly was not. Experienced drivers like Kyle Busch, Elliott Sadler and Aric Almirola will be racing with Jeffrey Earnhardt, Miguel Paludo and Craig Goess Jr.

Even good old Michael Waltrip decided to take a ride in this one. He is joined by hard-charging Johnny Sauter and truck series veteran Todd Bodine. There is no lack of speed in the field and none of the start-and-park chaos that dogged this series in 2010.

SPEED knows it suddenly has an opportunity to outshine ESPN and FOX. Instead of a cult classic, this may well be the season that the trucks move up the ladder in terms of respect among the competitors and the NASCAR media. In addition to the new faces, there is a neat twist in the series coverage.

Ford Trucks is the company that has made arrangements to sponsor TruckBuddy for every single race this season. That means at NASCAR.com the free four-box live video application with sound, scoring and social media chat will be ready to roll.

This is the first of NASCAR's three national touring series to offer an online video companion for all the races. While this does not have all the bells and whistles of the RaceBuddy app used on TNT's Sprint Cup Series races, that's not an issue.

The truck series has always been different and prided itself on that. New faces have come while others have gone as drivers on different career paths converged in this interesting form of racing. The one constant along the way has been TV coverage.

SPEED picked-up the entire series in the last TV contract and got off to a slow start. The race coverage developed into a strong presentation, but the network offered absolutely no support programming in terms of a weekly show. Fans got the pre-race, the race and a nice goodbye until next time.

This year, SPEED has come slamming out of the gate with a mature Race Hub program backed by additional live shows from the tracks. Steve Byrnes and company have made sure to provide the truck series with a lot of exposure it has been lacking.

All of a sudden, a series that in one race featured over 20 trucks starting and parking of 36 total now looks very different. Live TV coverage for practice, qualifying and the races. RaceBuddy for every single race free to fans online worldwide. Support programming in the form of Race Hub four days a week and added TV in the form of NASCAR Live from the tracks.

NASCAR.com, Jayski and SPEED's website have all been beefing up coverage of the trucks and that is only going to help a fan base increasingly using online resources to follow racing. Throw in Twitter and Facebook pages for the drivers, teams and sponsors and suddenly the Camping World folks look pretty smart for sticking with this series.

Krista Voda hosts The Setup pre-race show at 7PM ET Friday night to start the coverage. With Adam Alexander moving to the new SPEED Center show on weekends, it will be Hermie Sadler pairing with Ray Dunlap in the truck series pits this season. Rick Allen, Phil Parsons and Darrell Waltrip will call the Daytona race since Michael is racing.

We will live blog this race, but in the meantime feel free to add your comments on the series, the new media and the TV coverage. To add your opinion, just click on the comments button below. This is a family-friendly website, please keep that in mind when posting. Thanks for taking the time to stop by The Daly Planet.