Fasten Your Seatbelts, Randy LaJoie Is Back On TV 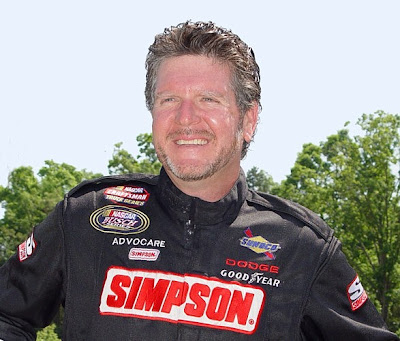 With the big weekend at Texas coming quickly, word that Randy LaJoie would be returning to TV this season came just in the nick of time.

Cutting through the politically correct and well-coiffed network TV announcers, LaJoie last season was a fan favorite for his great sense of humor and ability to "tell it like it is" on the Busch Series races. He was enthusiastic and irreverent all at the same time.

NASCAR fans might want to make a date for Monday at 5:30PM on ESPN2. The executives at ESPN have gathered Allen Bestwick, Marty Smith, and Mike Massaro for the "Big Monday" edition of NASCAR Now that ESPN calls the roundtable.

Added to the mix on this particular Monday will be the one-and-only Mr. LaJoie. That's right, LaJoie will be loose in the studio for the full hour with three journalists and no other former drivers. No Rusty Wallace, no Dale Jarrett and no Boris Said anywhere in sight. The results should be interesting.

There was no doubt that LaJoie and Bestwick had a great chemistry last season when calling stand-alone Busch Series races. This duo was a bright spot in a tough season for the NASCAR on ESPN efforts.

Viewers will not soon forget these two hosting the NASCAR Countdown pre-race show, calling the Busch Series race, and then hosting the post-race coverage. It was just Bestwick, LaJoie and some pit reporters.

On those broadcasts there was no fancy Infield Pit Center. There was no one standing-by to point out equipment issues in the Tech Center. The music was not blaring and the conversation was about the racing. SportsCenter updates and celebrity guests simply did not happen.

Now, LaJoie and Bestwick are reunited at a time when Bestwick's stock is at an all-time high. So far this season, Bestwick has been the ironman for the NASCAR on ESPN team and he shows no signs of slowing down. Putting LaJoie with him for a full hour program after the Texas weekend is simply a great choice.

One thing that ESPN has a tough time with on-the-air is fun. The suits-and-ties and strictly scripted productions have changed a casual and relaxed network into one that often puts distance between itself and the fan.

Perhaps, adding LaJoie to NASCAR Now and bringing him along for commentary on some Nationwide races this season is going to bring the laughter and fun back into the NASCAR coverage that viewers remember so well from ESPN's past.

With Major League Baseball's Opening Day all done, there should be no issues with Monday's NASCAR Now hitting the air at 5:30PM Eastern Time. Of all the combinations of personalities that have been featured on the Monday shows, this upcoming program promises to be one to remember.

The Daly Planet welcomes comments from readers. Simply click on the COMMENTS button below and follow the easy instructions. The rules for posting are on the right side of the main page, and we appreciate you taking the time to stop by.
Posted by Daly Planet Editor at 8:10 PM 14 comments: 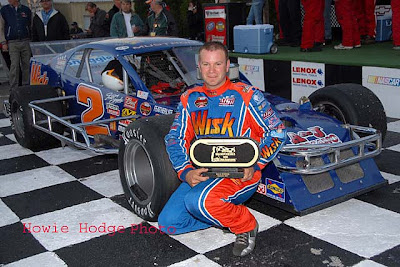 It was LW Miller who was interviewed a couple of weeks ago on NASCAR Now. The Whelen Southern Modified champ was excited about the season opener at Caraway Speedway in North Carolina.

He made the point that because the Whelen North Tour did not start until April, some of the Northern drivers would be towing down and Caraway would be just like an all-star race. True to his word, Miller won the race being chased to the checkers by Northern regular Teddy Christopher.

Viewers tuning into NASCAR Now on the day after the Caraway race were disappointed to see only the winner mentioned in the news and notes segment. There were no video highlights, no winner interview and no follow-up.

Wednesday, host Nicole Manske welcomed Whelen Modified North competitor Todd Szegedy to NASCAR Now and got a lesson in regional racing reality. Szegedy joined Manske in the studio, and put a face on the series that has been a great tradition in New England for many years.

In response to Manske's questions about his strict workout routine, Szegedy said he rides his (stationary) bike in the basement and works his "regular job." Manske was not ready for that reality check.

Instead of asking Szegedy about his family, his life and how hard the commitment to racing weekends in the Whelen Modified Series really is, Manske asked some bad questions and then ran a silly and dated video clip.

This is the season for NASCAR Now to open-up and understand that veteran fans do not see NASCAR as only the three national touring series. Szegedy talked about the Modifieds running three wide up at Loudon going 140mph on the backstretch. He talked about ten or fifteen top drivers being in contention for the win every single race.

It was clear he was proud of his sponsor and proud of his series. Unfortunately, NASCAR Now did not even promo the race at Thompson International Speedway or indicate that it would be televised. The learning curve where regional racing is concerned is still underway.

When many NASCAR fans hear names like Mike Stefanik, Eddie Flemke Jr., Jamie Tomaino and Reggie Ruggerio it brings strong memories to mind of great racing at classic tracks from Loudon to Martinsville.

As the rest of the Wednesday NASCAR Now program demonstrated, ESPN has cleared-up the vast majority of issues with this series and is now ready to capitalize on the momentum of the last two months. Perhaps, that will include a bit more coverage of the enthusiastic and exciting regional racers that spread the NASCAR brand from coast-to-coast.

The Daly Planet welcomes comments from readers. Simply click on the COMMENTS button below and follow the easy instructions. The rules for posting are listed on the right side of the main page. Thanks for taking the time to stop by.
Posted by Daly Planet Editor at 7:02 PM 22 comments: 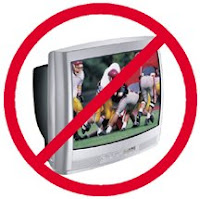 Things are always just a little bit different down in Texas.

Two good examples of that are the Thursday afternoon practice and the Thursday evening qualifying sessions for the NASCAR Nationwide Series.

The cars take to the track at Noon Eastern Time and after a short lunch break they end practice at 3PM. All 44 cars return to the track at 7PM for a qualifying session that should last about an hour. The Nationwide Series race itself does not take place until 3PM on Saturday.

SPEED Channel starts coverage of the activities in Texas on Friday and that network will handle the practice and qualifying sessions for the Sprint Cup Series. Unfortunately, that is the only series they will be televising.

Thursday, ESPN2 has "stripped" programming scheduled from Noon until 2PM Eastern. This means programming that runs every weekday at the same time like Oprah or The Price is Right. In this case, the show is called First Take.

Back to the Nationwide Series, it seems once again they are just the odd man out. SPEED has a certain number of practice and qualifying sessions they get to televise in the NASCAR contract and they do a good job.

Unfortunately, this leaves ESPN to prioritize between regular weekday programming, live sporting events, and the remaining NASCAR practice and qualifying sessions. The network's perspective on this Texas issue is very interesting.

Update: ESPN was outstanding in taking the time to address this issue, and responded to The Daly Planet with the following statement:

With ESPN having other commitments, and SPEED already televising all the practice and qualifying available to them in their NASCAR contract, isn't there a problem that remains unsolved? Isn't NASCAR the group to solve it?

As we mentioned earlier, the Texas Nationwide Series qualifying session takes place on Thursday at 7PM and should last about an hour. Ironically, it is a thirty minute version of NASCAR Now that is on ESPN2 at that time followed by an off-season version of the NFL Live program.

This week, the Nationwide Series entry list includes well known drivers like Dale Earnhardt Jr. and Kyle Busch. It also highlights the young guns like Brad Coleman and Kelly Bires. In between, Nationwide regulars like Mike Wallace and Marcos Ambrose are squeezed-in with Cup-whackers like Tony Stewart, Kasey Kahne and Clint Bowyer. This field is loaded with exactly the type of racing diversity that NASCAR likes to put on the track. Qualifying is going to be a good show for the fans in the stands.

TV viewers will have to tune-into the NASCAR Countdown show at 2:30PM on Saturday to get a perspective on the action from practice and qualifying.

With all of the positive changes this season involving the NASCAR TV partners, it is disappointing that this issue could not be solved among them with NASCAR's help.

Note: This column was updated at 6PM on 4/2/08 with the ESPN statement. Thanks again to our friends at ESPN for taking the time to offer fans a response.

The Daly Planet welcomes comments from readers. Simply click on the COMMENTS button below and follow the easy instructions. The rules for posting are located on the right side of the main page. Thank you for stopping by.
Posted by Daly Planet Editor at 9:35 AM 53 comments: