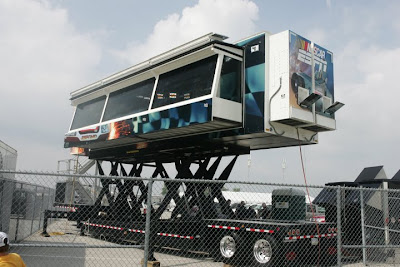 There was absolutely nothing going on at the Daytona International Speedway on Monday. That did not seem to matter to ESPN as the network began the fourth season of NASCAR Now. After a week of studio shows with a single reporter in Daytona, things were about to change.

The Infield Pit Studio was ready and the big boys were all front and center. Host Allen Bestwick greeted viewers on what would be the first of a solid week of one-hour specials from the track. Bestwick has become the face of NASCAR on ESPN through three seasons of hard work.

On this Monday, Brad Daugherty was in Charlotte, NC taping the first program of his new part-time TV job. Showtime is using the TV studios adjacent to the NASCAR Hall of Fame to record the Inside NASCAR series that airs on Wednesday nights. Daugherty, Michael Waltrip, Randy Pemberton and Chris Myers make up the cast.

This left the third chair open for a NASCAR Now panelist in Daytona and the network made a great decision in who should fill it. Ricky Craven joined the regulars Rusty Wallace and Dale Jarrett. Like Bestwick, Craven has been a hard worker for ESPN as a studio analyst back in Connecticut for the past several seasons.

These three teamed with Bestwick to offer one of the best programs in the history of this series. The fact that it was the first day back for the Infield Studio gang was amazing. Bestwick looked refreshed and set the tone quickly.

Danica Patrick might be a story, but Bestwick turned the attention to the Daytona 500 instead of ESPN's own Nationwide Series race. He then moved quickly into the Bud Shoot Out highlights while allowing all three panelists to contribute. After the video was over, Lead Reporter Marty Smith followed with a wrap-up that focused on Kevin Harvick and the continuing drama at RCR.

To NASCAR Now's credit, Bestwick and the panelists took their time to offer comments on the upcoming Sprint Cup Series races. This season, the TV program has established a Twitter account and is beginning to work this social media application into the show. The progress is slow, but it's steady.

Smith returned to explain the changes involved at Hendrick Motorsports that have linked the Mark Martin and Dale Earnhardt Jr. teams into one larger unit. The fact that both cars had the fastest times in qualifying opened some eyes in the garage. Smith did not overstate the issues and kept the Hendrick hype to a minimum.

Danica Patrick spoke to Smith and the result was a rather frank interview on how her decision was reached to drive in the Nationwide Series race. Patrick insisted the decision was made on Sunday and that all the parties involved encouraged her to race. It was a shame that Patrick insisted on wearing hugely over-sized sunglasses during the interview.

The NASCAR Now panel was unanimous in the opinion that Patrick can handle the Nationwide Series race. Rather than running for the win, it was seat time and experience that the three former drivers thought should be Patrick's focus.

Kevin Harvick was the featured interview and the program continued the practice of letting all the panelists ask questions. Even with Harvick speaking from his North Carolina shops by satellite, having Jarrett, Wallace and Craven involved made the entire interview much better.

It seemed that Craven's presence made the other panelists feel at ease. Working for years with Bestwick in the ESPN2 studio, Craven left an impression that he can perhaps fill some other roles for ESPN during this very long season. Bestwick has already been tapped to call some Nationwide Series races for the network this year. Perhaps, Craven joining him in the booth might be a solid combination.

It was nice to see all the resources ESPN put into this program. These are the network's All-Stars and that was plain to see. The conversation was easy, the questions less scripted and everyone participated. It was a fast-paced hour that was over in a flash.

It seems to be understood that a good week of NASCAR TV from the ESPN crew will go a long way toward erasing the tough memories of the Chase coverage from 2009. Monday was a tremendous start.

We would like your comments on this topic. To add your opinion, just click on the comments button below. This is a family-friendly website, please keep that in mind when posting. Thank you for taking the time to stop by The Daly Planet.
Posted by Daly Planet Editor at 7:00 AM 16 comments: