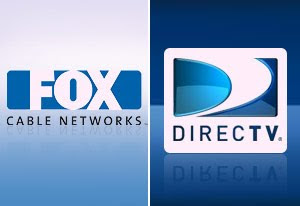 Confirmed: Shortly before 6:30PM ET, the news was released that an agreement has been reached in the ongoing dispute between DirecTV and FOX. Cable networks like SPEED, FUEL and FX will be unaffected and the agreement extends to other FOX cable networks and local broadcast stations. Thanks for your patience, more details will be added when released to the media.

It's crunch time for the latest media crisis involving the struggle between content providers and distributors. This time, DirecTV is facing off with a slice of the FOX franchise that provides cable network content.

The equation is simple. The current agreement for a package that includes FX, SPEED, FUEL and the FSN regional sports networks is set to expire. DirecTV has indicated that FOX is seeking a substantial increase in payment for delivering these services. Numbers used to describe the increase range from 25 to 38%. DirecTV is not going to agree to the increase and will remove these networks on Nov. 1 from the service.

There is no love lost between these two parties. The current CEO of FOX used to run DirecTV. FOX has a long history of playing hardball with distributors. The DirecTV strategy is to set a deadline for removing these networks and negotiate against that deadline.

In essence, DirecTV is using the only real weapon it has and that is to discontinue distributing content to the 19.4 million homes it services. In response, FOX expanded the online propaganda to include statements that were not true. DirecTV then complained to the FCC.

"Fox is using misleading advertising informing DirecTV customers that 'soon, in some markets, you may lose your local Fox station,'" DirecTV Executive Vice President Derek Chang wrote to the FCC. "Even if the Fox cable channels are no longer carried on Nov. 1, the broadcast stations are covered under a separate agreement, which does not expire until Dec. 31."

FOX had begun to say online and in media releases that the FOX News Channel and local FOX over the air TV stations would be lost in this agreement. That is not accurate and is intended to mislead consumers.

The last update on the negotiations was Saturday before the parties broke for the weekend. At that time, the sides were far apart. In a nutshell, FOX is trying to ram this agreement through using the current hit shows on FX as the leverage. Sons of Anarchy, American Horror Story and others have given the FX primetime a boost.

One real issue on the table is that FOX has constructed a series of cable networks that simply "churn" content during the daytime on weekdays and depend on primetime and weekends to provide original and popular programming.

SPEED is a good example of this type of network. Between 3AM ET and 6PM on weekdays the network is a hodgepodge of content. There has never been an original morning show, there is no content designed for afternoons and currently the Monday through Thursday primetime line-up is a disaster.

SPEED recently moved NASCAR RaceHub out of primetime in the heart of the NASCAR season and replaced it at 7PM with two re-airs of the "drag racing" show Pass Time. Click here for a story on the new series SPEED ordered for 2012.

DirecTV has a point. What FOX is offering is basically several series on FX and the regional sports networks showing NBA, NHL and MLB programming. It should be interesting to see how negotiations progress today as the Nov. 1 deadline approaches.

Update #1: At 12:55PM, the Hollywood Reporter confirmed negotiations are in progress, but both sides declined comment.

Update #2: At 1:30PM ET all the SPEED twitter accounts are now tweeting the link to the Facebook page containing the FOX anti-DirecTV video. It never mentions the substantial rate increase demanded by FOX, only tries to scare DirecTV subscribers about losing FX shows and sports programming.

Update #3: At 2PM FOX fired back at the perception they are the bad guys in this dispute. Latest from Fiercecable.com: "Yes we are still negotiating and are hopeful the parties can reach an agreement," said Fox senior VP of communications Scott Grogin. "We plan to leave our signals up and available to DirecTV. If the signals come down, it will be because DTV took them down," he added.

Update #4: 3:30PM and Variety updates that no information is out, both sides continue to negotiate. SiriusXM's Pete Pistone tweeted DirecTV spokesman told him to expect SPEED and other nets in deal to be removed at midnight PT.

Update #5: At 5:30PM, DirecTV said "We are actively in discussions & hope to reach a fair agreement." Told both sides talking, but no hint of resolution at this time.

Update #6: at 6PM, DirecTV on FOX actively encouraging existing DirecTV customers to cancel service and switch to cable TV - "Switching only helps FOX charge a higher price, and will result in a higher monthly bill for you, no matter who you get your TV service from. News Corp and FOX are by far the most aggressive programmer in the industry. They want you to switch so they can put more pressure on DIRECTV to agree to their outrageous price increase. FOX will then take that new price to all the other TV providers, demand they also pay the new higher price, and start scaring their customers into switching service."

We will continue to update this story and post updates on this main page. Today is a critical day for both sides to either agree to a compromise deal or stand their ground and let the services in question go dark. Stay tuned.

To add your comments on this topic, just click on the comments button below. 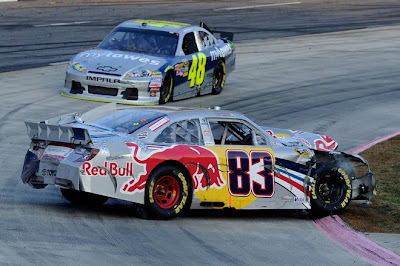 The short-track in Martinsville, VA proved to be the undoing of ESPN this season. There are simply no words to describe how awful this telecast was once the race started. It defied description.

The pre-race show was solid and really worked well to set-up what everyone knew would be a tough day of bumping and banging. Rusty Wallace was absent due to the passing of his father on Saturday. Nicole Briscoe hosted with Dale Jarrett, Marty Smith and Brad Daugherty in the studio.

Marty Smith replayed an interview with Brad Keselowski and contributed to the topics on the pre-race show. His presence was refreshing and worked well with Jarrett. Wallace has been re-signed by ESPN through 2014. No word on Daugherty's future.

It was Allen Bestwick, Dale Jarrett and Andy Petree in the TV booth. Jamie Little, Dave Burns, Mike Massaro and Jerry Punch were on pit road. Tim Brewer was in the Tech Garage.

Once the racing started it was made very clear that this race was going to be the tightest-framed and most awkward coverage in the five year history of ESPN since returning to NASCAR. The leaders were immediately framed when the green came out and the racing and incidents in the field were never seen.

It was replays that were used to explain to TV viewers time and time again what had actually happened on the track and pit road. The full-screen insertion of commercials for the first half of the race made it even more miserable. ESPN was caught in commercial when caution came out repeatedly.

ESPN has made it clear that this "hyper-tight" coverage is the way they are going to produce NASCAR races. In the body of this telecast, there were entire segments where the cameras never extended beyond showing two cars in the frame. The race recaps were presented with single car camera shots, despite the fact that the racing was under green.

To add insult to injury, the aerial camera was only used as the transition into commercial breaks. The low-angle speed shots were rarely used. Instead, the director zoomed-in on one or two cars at a time. Then, he shifted to one or two other cars as the announcers were instructed to talk about those drivers.

One key to the tension in this telecast between the broadcast booth and the producer and director in the TV truck were the frequent times when what was being discussed did not match what pictures were being shown. Bestwick would be yelling about the beating and banging at the back of the pack while the director zoomed-in on the leader of the race. After a moment of silence, Bestwick would be made to talk about the pictures. It was awful.

The restart with 27 laps to go saw ESPN shoot the leaders only and again miss a spin in the pack, this time involving Ryan Newman. It was a typical restart scenario for ESPN on this day. Zoom into the leader, then replay what happened that TV viewers never saw. Many fans seemed to be as frustrated as some of the drivers.

It's not rocket science to allow the cameras to show the cars racing on this short-track to the TV viewers. It's a track that has been covered on TV for a very long time by lots of different TV networks. Ultimately, it takes effort to make the kind of mess ESPN made Sunday.

The drivers offered a lot of action. The stories were unfolding at a hectic pace. It was a critical race in the Chase. There were multiple caution flags. Tempers were boiling. The TV response was single-car camera shots with forced storylines.

We invite your comments on this telecast. To add your TV-related opinion, just click on the comments button below.