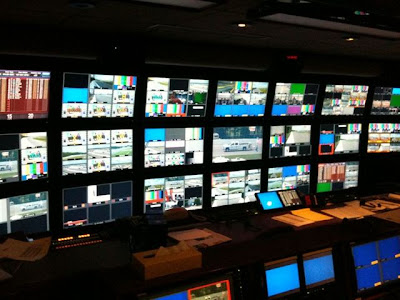 The six summer races on TNT might go by quickly, but this tech-savvy group usually leaves behind some lasting impressions. Apparently, despite the fact that Pocono is not perhaps the most exciting racetrack, the TNT television coverage and website applications started off with a bang.

Here is the TV data:

The more detailed rating specifics will be out later this week, but that certainly brings a little positive news to NASCAR's TV struggles.

A big part of the overall Turner appeal was that the online applications were available to all users for free on Sunday. RaceBuddy, Raceview and Trackpass are all accessed through the NASCAR.com website.

Here are the online numbers during the Pocono race:

NASCAR.COM had over one million unique visitors, an increase of +13% vs. the Pocono race in 2009.

Total video streams on Sunday (on demand + live) were up 227% YOY to 724,000 streams including the 2010 debut of RaceBuddy, a multiplatform experience which features four camera angles and a mosaic view.

As we have discussed many times, perhaps the biggest hole in Sprint Cup Series exposure is the fact that the pre-race, live race and post-race coverage already done by the existing TV partners is not made available for streaming to desktop and laptop computers. The closest fans can come are the four cameras offered by RaceBuddy. Even the paid NASCAR.com applications have no video features.

When the Turner folks say video streaming was up over two hundred percent, what that really reflects is the rapidly changing demand for online technology and the fact that NASCAR continues to fundamentally fail in this area.

Think about it. We just finished the entire NASCAR on FOX portion of the season without any online video. A feeble attempt late in the season by FOX to provide online post-race video coverage only came after bad national reviews.

Once TNT is done, there are no plans for ESPN to continue RaceBuddy or work with the online rights holder (Turner Sports) to make any additional video content available online. Five races until the online curtain falls yet again for the season.

In today's on demand world, there is simply no excuse for NASCAR, Turner Sports and the NASCAR TV partners not to hammer out an agreement to serve the fans. It should only take ESPN one shining moment to remember what the NFL regular season did to NASCAR on TV last year. RaceBuddy should be the immediate response.

Update: The extended ratings information is out and reveals a slight drop in total number of viewers vs. last season. Targets like men, age groups and cable competition remained the same.

Here is the information from Scene Daily:

TNT averaged a 3.1 final U.S. rating for the Gillette Fusion ProGlide 500 Sunday at Pocono Raceway, down 8.8 percent from the 3.4 national rating a year ago, according to Street & Smith’s SportsBusiness Daily.

The race drew 3.614 million households on TNT on the same day as the NBA Finals on ABC (which drew 10.545 million households), the NHL Stanley Cup Finals on NBC (3.75 million) and the MTV Movie Awards (3.274 million), according to the SBD figures from Nielsen.

The race, which delayed by one and forty minutes due to rain, was Sunday’s top telecast on cable among men 18-49 and 25-54.

We welcome your comments on this topic. To add your opinion, just click on the comments button below. This is a family-friendly website, please keep that in mind when posting. Thank you for taking the time to stop by The Daly Planet.
Posted by Daly Planet Editor at 12:01 AM 19 comments: