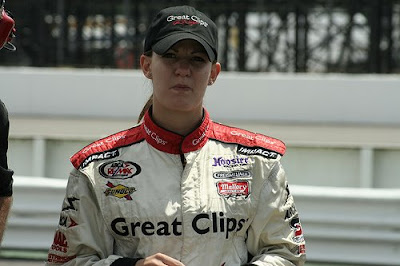 This is the second season of the new NASCAR TV contract and it continues to be a moving target for many fans. This Friday from Talladega, the action shifts from ESPN2 back to SPEED for the full day.

The Craftsman Truck Series takes to the track at Noon Eastern Time for live qualifying action. This is a tough season for the series, with only 28 viable trucks on the Talladega entry list. There are four additional trucks that will try to qualify for the event, but they are battling with the minimum lap time and not for pole position. Driver Richard Johns in his Chevy is the slowest, almost nine full seconds off the practice speed of Todd Bodine. Nine seconds...per lap.

Rick Allen and Phil Parsons will call this session with Michael Waltrip as the third analyst in the booth. Down on pit road will be Adam Alexander and Ray Dunlap. It should be noted that Dunlap is also the media guest on Tradin' Paint this week. Fans may have some memories of his last appearance on that program which earned him a "time-out" from his employer.

Once the trucks get sorted-out, the Sprint Cup Series takes to the track for two practice sessions beginning at 2PM ET. Steve Byrnes will host with Larry McReynolds and Jeff Hammond in the broadcast booth. Down in the garage area will be Bob Dillner and Wendy Venturini.

SPEED has become a favorite for this coverage because of the network's willingness to simply cover practice. Action on the track is featured, the reporters follow-up on stories and McReynolds is wonderful at telling viewers what different teams are doing and why. Dillner and Venturini move seamlessly through the garage area as if they are team members.

In between sessions, John Roberts will host a quick version of NASCAR Live. Randy Pemberton and Hermie Sadler will give the other TV crew a break while they talk to teams about what went right and what went wrong in the early session. This same team will return after practice to host a thirty minute edition of NASCAR Live at 4:30PM. This should wrap-up the NASCAR day and prep SPEED viewers for the upcoming ARCA event.

Race coverage for the ARCA Series begins at 5PM with Allen and Parsons back on the call. Venturini will be joined by Jim Tretow to handle the reporting from pit road. Lots of NASCAR eyes will be on this race, as ARCA has quickly become one of the main training grounds for future Nationwide and Sprint Cup Series drivers.

Mike's daughter Chrissy Wallace will be in the event as will Joey Logano and his JGR teammate Marc Davis. "Mr. Red Bull" Scott Speed will be racing as will former AMA champ Ricky Carmichael in a Kevin Harvick Inc. machine.

One driver to keep an eye on is 23-year old Gabi DiCarlo who is the only full time female driver in the ARCA Series. She is pictured at the top of the page. Her sponsor is Great Clips and that company has already committed to another full ARCA schedule in 2009 with DiCarlo. She is driving the car of a teammate that won the opening ARCA event in Daytona back in February.

While the ARCA race is underway on SPEED, ESPN2 will air NASCAR Now at 5PM. Nicole Manske will host the show, recap Sprint Cup Series practice and preview the Sunday race. The Nationwide Series that normally races on ESPN2 is idle this week.

SPEED is topping-off Friday with a blockbuster of a show. In what may be the ultimate fan recipe for Talladega, it will be Dale Earnhardt Jr. and Jeff Gordon who appear as the guests on the rowdy Trackside show at 7:30PM. This show is on after the ARCA race, so viewers who are recording should add some extra time on the DVR, VCR or TiVo.

Byrnes hosts this show with Hammond and McReynolds. Elliott Sadler is the fourth panelist during this stretch of the season. Needless to say, the combination of Junior, Gordon and the Talladega crowd should be interesting to watch.

Please feel free to offer your TV-related comments on the topics above. This post will also host the in-progress comments on these SPEED programs on Friday. Let us know how you think SPEED is presenting the activities from Talladega by clicking on the COMMENTS button below.

There is nothing to join and we do not want your email address. What we want is your opinion. The rules for posting are located on the right side of the main page. Thank you for taking the time to stop by The Daly Planet.
Posted by Daly Planet Editor at 9:15 PM 78 comments: