Chad Knaus Where Are You? 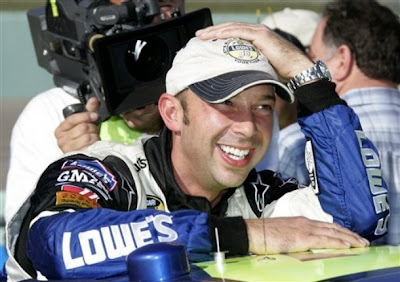 Several things happen when studio TV shows change on-air personalities. There have been no better examples of that than the Monday versions of both NASCAR Now on ESPN2 and This Week In NASCAR on SPEED.

Both shows have changed dramatically for the better. Allen Bestwick is steering the ship for ESPN2 and Steve Byrnes has stepped-in for SPEED. While Bestwick has a rotating panel on a weekly basis, Byrnes has a very different situation.

Stepping-in to replace Dave Despain as host, Byrnes inherited a personality-driven program that had been stagnate for years. A TV veteran, there was no doubt that Byrnes could keep order and direct the TV traffic on the set.

The crucial element to the program was going to be the personalities on the "expert panel." SPEED decided that the new show was going to feature Michael Waltrip on every episode. Instead of adding two more panelists, TWIN was going to alternate Greg Biffle and Chad Knaus as Waltrip's sole partner.

Once things began to evolve, it was clear that Waltrip and Byrnes had been friends for years and the banter between them was fast-paced and sometimes hilarious. Biffle tends to be a serious individual and his appearances often evolve into some serious discussions about racing incidents and issues. That is not the fundamental appeal of this show.

Knaus, on the other hand, has fit right in. Awkward at first, Knaus has now figured out how to deal with the energetic Byrnes and the sometimes overpowering Waltrip. The results have been exactly what SPEED had in mind.

After the rain forced changes in Richmond, TWIN found itself without Knaus or Biffle on Monday because of scheduling issues. Rather than step outside the small circle, Michael McDowell was brought-in from MWR to be the second panelist. It was a big mistake.

This program was the preview show for the entire Chase For The Championship. It deserved a full and experienced panel, if not an expanded one. Between SPEED and the NASCAR Media Group, there should have been a better selection made for this show.

One sticky issue with Waltrip is his ever-present sponsor plugs. This time, he actually brought one with him. McDowell is a nice young man, but just like a young Brian Vickers, he was completely out-of-place in this role that requires a true NASCAR veteran.

Byrnes trooped through the agenda and stepped-in as best he could to pull the show along. A great feature on the late Kenny Irwin Jr.'s parents, solid race highlights and a new weekly spot by Humpy Wheeler were good moments on the program.

Several times since this new show began we have advocated adding a third panelist. This format worked well for SPEED for over a decade and perhaps the next ten shows during The Chase deserve a little more conversation that two panelists bring to the series.

The Daly Planet welcomes comments from readers. Simply click on the COMMENTS button below and follow the easy instructions. The rules for posting are located on the right side of the main page. Thank you for taking the time to stop by.
Posted by Daly Planet Editor at 10:00 PM 48 comments: 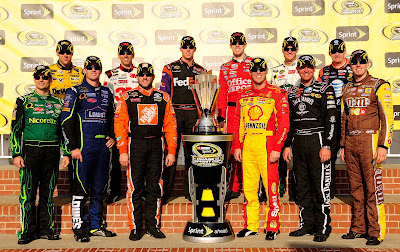 The Chase For The Championship always brings out some interesting new twists in the TV programs that go along with the sport. Above is the official picture of the twelve drivers. Just click on it to view it full-screen. Thanks to NASCAR and photographer Rusty Jarrett for the image.

Monday, ESPN2 presented a ninety-minute version of the popular NASCAR Now "roundtable." Normally, this program features a panel of three who talk with host Allen Bestwick about the previous week's racing and then preview the events to come. The show usually has one guest appear by satellite liveshot and has been a great part of ESPN's NASCAR TV package.

This week, the idea was to bring all of ESPN's former drivers and crew chiefs into the Connecticut studio and talk about The Chase. Unfortunately, that put a few too many cooks in the TV kitchen.

Bestwick had Rusty Wallace, Tim Brewer and Ray Evernham on the set alongside of his host position. On a side set were Dale Jarrett and Andy Petree with reporter Mike Massaro as a second host. This dynamic made the show struggle. Rather than appear as two-halves that made a whole, the separate sets made for a disjointed program.

Massaro and his gang got a lot of information across where The Chase was concerned. Petree and Jarrett have been working together all season long and it shows. Massaro was a good host and led this team through a solid review of the Sprint Cup Series race from Richmond.

It was left to Bestwick to deal with the payback issue of the Earnhardt vs. Busch accident. Wallace called it flat-out payback, Evernham tried to call it an accident and Brewer said the two were now even. Bestwick once again played-back the earlier accident and Wallace said enough already, it was time to move on.

Fans of this show normally enjoy the interaction between the guests on the set. Unfortunately, Bestwick had Wallace, Evernham and Brewer grouped together. These three responded directly to Bestwick and barely even acknowledged each other on the set. Even though they flew up on the Wallace plane together, this trio of gray suits had a tough time meshing.

Meanwhile, over in "party central" Massaro led Jarrett and Petree through a rundown of The Chase contenders that showed-off the strengths of these three broadcasters. Petree has flat-out been turned loose and his opinions are stronger than they have ever been in his time at ESPN.

Evernham was interesting on this show because he is an active owner in the Sprint Cup Series. That really put him in the tough position of constantly stepping into-and-out-of different roles. He is well-spoken and informed, but it has to be tough for some fans to take his comments about other teams at face value.

Carl Edwards and Clint Bowyer appeared on the show as live guests and both were tired and polite. Bestwick interviewed Edwards and Massaro interviewed Bowyer. It was nice to watch two good NASCAR reporters ask all the right questions.

While Evernham and Brewer were informative, this show really needed to be just ESPN's big three. Jarrett, Petree and Wallace really would have been fun to watch, especially when Wallace gets fired-up and makes things exciting. Brewer's limited role in the Tech Center really does not lend itself to this type of appearance.

Since the panel was at the ESPN headquarters, it seemed only natural to wrap the program up with the kind of silly media hype that pervades the ESPN studio shows. Categories like biggest controversy, biggest disappointment and most flagrant foul smelled an awful lot like SportsCenter.

Bestwick actually ended the show by asking what each panelist would change if they were NASCAR's "commissioner." Since NASCAR does not have one of those, perhaps it was a subtle dig at the TV format that Bestwick had managed to avoid until this Monday.

Leave it to Dale Jarrett to fire a shot across the NASCAR bow on the way out the door. "Let's get rid of that rear wing," said DJ. "This isn't what NASCAR stock cars are supposed to look like. That (rear wing) is for other forms of racing. Let's get this back to what we have known forever."

Rarely has Jarrett been given an opportunity to speak-out on this issue and he made the most of it on this show. Perhaps, NASCAR Now during the week will follow-up on his comments and get the debate going about changes to the COT for 2009.

Next Monday it will be Craftsman Truck Series driver Todd Bodine who joins Evernham, Massaro and Bestwick for a one hour show at 5PM. Bodine is a veteran who should be able to lend some expertise to the Truck Series highlights from Loudon. That show will hopefully get things back to normal as this program is usually right on-track.

The Daly Planet welcomes comments from readers. Simply click on the COMMENTS button below and follow the easy instructions. The rules for posting are located on the right side of the main page. Thank you for taking the time to stop by.
Posted by Daly Planet Editor at 9:45 PM 33 comments: