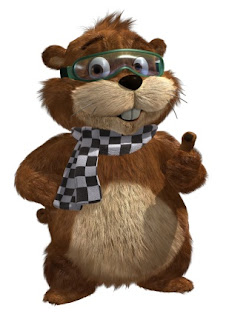 Digger should be right at home in the Phoenix desert. At one end of the odd-shaped speedway is Rattlesnake Hill and at the other is one of the meanest sunsets on the Sprint Cup Series tour.

It will be 8PM when Chris Myers leads the NASCAR on Fox team on the air with Jeff Hammond and Darrell Waltrip alongside from the Hollywood Hotel. Look for more of the same in this show, including lots of team Hendrick and a smattering of Kyle Busch.

Mike Joy will call the action in the race that takes the green flag at 8:46PM. Put on a pot of coffee, it is going to be a long night. Waltrip and Larry McReynolds will be alongside Joy. Down on pit road will be Krista Voda, Steve Byrnes, Matt Yocum and Dick Berggren.

Phoenix makes great pictures and sound at night. The roar of the cars and the sparks should make some great TV once the sun sets. The track has a nasty D-shaped backstretch and lots of the passes and crashes take place in this area.

Click here for a link to the TDP column of this race last season. Remember the big Fox baseball vs. NASCAR disaster? Yep, this was the weekend that Waltrip did the pre-race show during MLB rain delay and then the game ran right up against the green flag. Talk about a no win situation.

This season there is ninety minutes scheduled between the end of the live baseball game and the start of the Phoenix race coverage. With the MLB game in progress and no sign of rain on the horizon, perhaps things will be a bit smoother this season.

Fans also may remember that this race ended last year with Fox showing the winner and no other car cross the finish line live. TV viewers got camera shots of the pit crew and the winning car slowing down as the rest of the field furiously battled to the finish line.

This season the NASCAR on Fox team has consistently used a wideshot to show all the lead lap cars crossing the finish line. This has been a wonderfully positive change and one that has allowed Joy, Waltrip and McReynolds to keep the excitement level high while the storylines throughout the field play-out.

The action is fast in the pits at Phoenix and the reporters are going to have to keep fans updated all night long. This was a big failure of the ESPN Nationwide Series coverage on Friday as the stories of the teams not in the top ten were never told. Well, unless those stories involved Carl Edwards or Kyle Busch.

The diverse Cup Series starting field includes spoilers with nothing to lose like Regan Smith and Scott Speed. There are also potential start and park teams like Joe Nemechek and Dave Blaney. It should be interesting to keep an eye on that issue. Scott Riggs also finally made a race and has something to prove about his effort this season.

Keep an eye on whether Fox uses the triple or quad video split on the caution flag pit stops. The network has flip-flopped on this issue in 2009 and the tight pit road in Phoenix might make the triple split much better for the fans.

Digger has been low key in the races recently but has returned in the pre-race show with his cartoon series. Phoenix has great track level camera shots, so this may cause the Digger animation to once again become a bigger part of the telecast.

This post will serve to host your comments about the NASCAR on Fox coverage of the Sprint Cup Series race in Phoenix. To add your TV-related opinion, just click on the comments button below. This is a family-friendly website, please keep that in mind when posting.

Thanks once again for taking the time to stop by The Daly Planet.
Posted by Daly Planet Editor at 5:00 PM 361 comments: