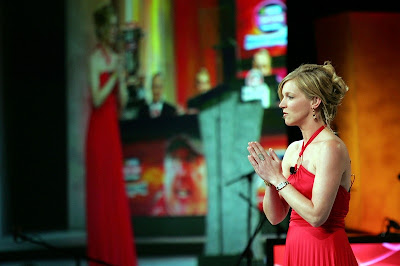 It seems somehow fitting that SPEED would be the NASCAR TV partner to close-out the 2008 season. NASCAR coverage first began this year with SPEED's John Roberts anchoring the January testing coverage from several tracks.

We sometimes get caught-up in comparing the different styles of the three NASCAR TV partners who cover the Sprint Cup Series. That allows SPEED to fly under the radar.

While that network covers practice and qualifying sessions for the Nationwide and Sprint Cup Series, it is the "support programming" like RaceDay and Victory Lane that most NASCAR fans remember.

The only NASCAR series totally served by SPEED is the Craftsman Truck Series. With the Camping World sponsorship set to begin next year, SPEED is delivering to both NASCAR and Camping World the only national racing series with significantly higher TV ratings for 2008.

Contrasting the style of SPEED while producing the Truck Series races with the three Sprint Cup TV networks is always interesting. ESPN ended the season with four announcers in the infield studio and three in the broadcast booth for a total of seven. SPEED used three during the year.

ESPN used four pit reporters to cover the teams while SPEED used two. By including Tim Brewer on the team, the ESPN total number of on-air voices during the actual race was twelve. Since Krista Voda stepped aside after the pre-race show, the SPEED number was five.

As TDP reported many times over the season, Truck Series Producer Keith D'Alessandro chose to keep things simple and focus the coverage of the event on the racing. While this concept seems basic, it was the key problem for all three of the Cup Series TV partners. During the races, there was always something else going on.

SPEED was helped by a good cast of characters who raced in the Truck Series last season and the racing itself was fun to watch. Play-by-play announcer Rick Allen and color analyst Phil Parsons have bonded with the series and made this a real franchise for SPEED.

Added to the booth line-up for some spice was Michael Waltrip. At first an unabashed Toyota cheerleader, Waltrip found himself this season and decided to complement Allen and Parsons. The results can be seen quite easily. A tremendous rise in the TV ratings and a fantastic season of NASCAR racing on TV.

It will be Allen and Voda who host the post-season banquet coverage on SPEED. The program airs on Monday at 8PM and will once again be the casual "talk show" format that worked so well for Allen Bestwick and Shannon Spake during the Nationwide Series TV show. Click here to read that review.

The Truck Series holds the banquet almost immediately after the season at a hotel in the South Florida area. The post-produced presentation of this banquet has actually been fun to watch on SPEED for the past couple of seasons.

Popular comedian Tom Papa is returning. In the past, he has brought the house down with his personal style that involves those attending the banquet and really helps to break the ice for the nervous drivers and teams. The musical guest is John McLaughlin.

Unfortunately, SPEED is not preceding the banquet program with the Truck Series year in review program. The network remains firmly focused on filling the weekdays with reality-based "lifestyle" programming. On this night, NASCAR is following PINKS, Pass Time and Unique Whips.

There will be a full column up about the Truck Series banquet shortly after it concludes. To add your thoughts about the Truck series coverage on SPEED this season, just click on the COMMENTS button below and follow the easy instructions. Comments will appear shortly after they are submitted. Thanks for stopping by.
Posted by Daly Planet Editor at 5:14 PM 7 comments: