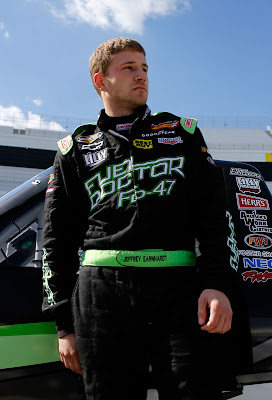 It has not been the kind of weekend NASCAR expected so far in Martinsville. The tire Goodyear brought to the track has not "rubbered in" and as we have seen before the only thing coming from the tire is tons of "marbles."

The truck series is going to be watched very carefully for tire wear. The hope is that all the trucks and the heat from the field will allow the track to finally take some rubber. The reality is that the wind is blowing almost 40mph and the temps are still cool. It's not looking very good right now.

The truck field again looks to be dominated by the cross-over Sprint Cup Series drivers in much the same way that they affect the Nationwide Series races. Truck series "regulars" with a shot include Ron Hornaday Jr. and Todd Bodine. Also in the field is Johanna Long, who won the Snowball Derby earlier this season and is persistent on these types of flat short tracks.

SPEED has Krista Voda opening the coverage with The Setup at 1:30PM ET. Ray Dunlap and Hermie Sadler will join her as the pit reporters. Rick Allen, Phil Parsons and Michael Waltrip will call the action once the racing begins.

The good news is that the veteran SPEED production team is handling the coverage. This should result in an interesting TV comparison between the Saturday truck and Sunday Sprint Cup Series telecasts. The SPEED production team is interactive with fans on Twitter, shoots the event with the emphasis on the racing and rarely gets distracted with TV gimmicks and special effects.

This post will serve to host your comments about the SPEED coverage of the Camping World Truck Series race from Martinsville, VA. To add your TV-related comment, just click on the comments button below. Thanks for stopping by.