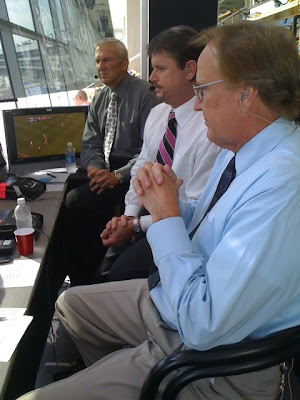 This is the weekend where the reality that the season is ending makes itself known. Lots of stories are playing out in a very personal way.

That is certainly true in the Nationwide Series, where sponsors have been hard to find and many teams and drivers that started the season are no longer racing. Now, there are three races remaining and eyes have turned to 2010.

The standard pre-race starts the day with Allen Bestwick, Rusty Wallace and Brad Daugherty in the ESPN Infield Pit Studio. Then, the fun begins.

ESPN brought in Marty Reid to handle some of the final Nationwide Series races. His happy and exciting presence has been perhaps the only bright spot for the network. A tired Dale Jarrett and a frustrated Andy Petree will be alongside of Reid today.

Last Sunday, Jarrett and Petree found themselves waist-deep in the play-by-play role as Jerry Punch was rendered completely helpless by the single file racing. Petree was the most aggressive, interrupting Punch repeatedly to re-focus the attention to the racing on the track instead of Punch's extended question and answer sessions.

Now Jarrett and Petree will be pushed back into the traditional role of color analyst when they work with Reid. The excitement will be provided, the racing action will be described in full and it will be up to the two analysts to switch back into providing perspective, not a race call. That dynamic should be interesting to watch.

ESPN's Producer and Director seem to be mad at the fans. As one poster said, they seem to be "mailing it in." Since the Nationwide Series has a diverse group of drivers, the stories are always changing. ESPN has kept the cameras squarely on Kyle Busch and Carl Edwards with a smattering of Joey Logano and Brad Keselowski.

The stories of the Nationwide regulars are routinely ignored. The reality of the racing on the track is ignored and the focus remains on the Sprint Cup drivers in the field. This has been a source of frustration for Reid, who has several times called out on the air for the TV truck to show the racing.

This race in Texas may continue to show the tension that is clearly in the air between NASCAR and ESPN. After the rare public criticism of ESPN directly by NASCAR, how the TV team reacts will be interesting to see. Jarrett specifically was singled out by NASCAR.

Shannon Spake, Jamie Little, Vince Welch and Dave Burns are reporting on pit road. This track is fast and the reporters will not probably be seen on camera during the race unless there is a red flag. Tim Brewer will be in the Tech Garage. His updates had better be well-timed with accidents and passes happening on the TX track in a flash.

The weather is great and the NASCAR Media Group TV compound has been making great pictures all day long. The overall TV presentation should come down to choices by the Producer and Director.
Posted by Daly Planet Editor at 11:30 AM 284 comments: 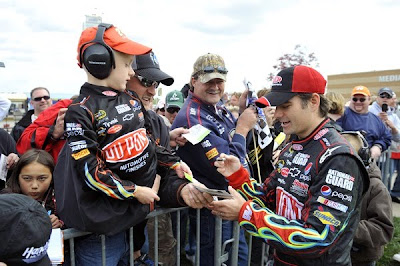 Steve Byrnes, Jeff Hammond and Larry McReynolds are set to host the final practices for the Cup Series from Texas.

This is a fast track with the potential for trouble all around the circuit. SPEED has perfected the practice coverage and uses Wendy Venturini and Bob Dillner to report from the garage area. These two have consistently kept viewers up to date with the stories unfolding during these sessions.

The weather is great, the pictures are good and the action even during practice is interesting to watch. This post will host your comments about the practice and Happy Hour coverage on SPEED.

To add your TV-related comment, just click on the comments button below. Thanks for taking the time to stop by The Daly Planet.
Posted by Daly Planet Editor at 9:45 AM 42 comments: