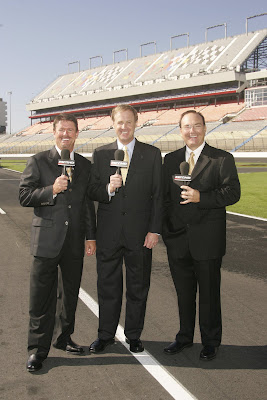 Some fans watching on TV were a little bit apprehensive going into the Friday night Nationwide Series race from Darlington, SC.

ESPN2 was going to host the live telecast as usual, but Rusty Wallace would be handling his normal pre-race duties and then stepping-into the broadcast booth for the vacationing Dale Jarrett to call the race. Rusty was going back to a role that he had vacated after only one season "in the seat."

Allen Bestwick set the crisp and fast-paced tone for the evening with the NASCAR Countdown pre-race show. Brad Daugherty and Wallace have proven to be an unlikely success in their pre-race roles in the Infield Pit Studio. Daugherty asks a lot of questions, and can usually get Wallace excited about a number of subjects in thirty minutes.

Wallace got all charged-up once again on Friday, and then transferred his energy to the booth where he joined Dr. Jerry Punch and Andy Petree. Last season, this group worked hard but the chemistry was just not there.

As NASCAR fans know, the ESPN solutions included moving Wallace to the Infield Pit Studio and bringing-in Bestwick to replace Suzy Kolber as the host. Daugherty was retained, and then Dale Jarrett was hired as the Lead Analyst in the broadcast booth. This was a shake-up aimed at results.

The new combination proved to be effective right out of the gate. Now, as ESPN rests their talent before the long run through the Sprint Cup, Wallace was once again going to be on-the-spot with Jarrett absent.

Once underway, it was clear that Wallace was not the only one pumped-up about this track and the new surface. Punch brought a new level of enthusiasm and focus to this telecast that had been lacking earlier this season. It seems a vacation had re-charged Punch's batteries quite well.

Once Petree joined the party, the results were perhaps ESPN's finest Nationwide Series broadcast of the season. Punch worked hard to include all of the pit reporters and Jamie Little finally stood-out with her ability to ask the right basic question and then...listen. What a change from last season on pit road for the entire team.

Great pictures and sound framed a beautiful looking broadcast that once again showed the positive aspects of the ESPN graphics package. Simple and informative, this time the production team kept the information basic and on-target. The hype was gone, except for the one poor decision to replay Kyle Busch being introduced to the crowd. That made no sense, and left Punch sounding awkward on-the-air.

What more than made-up for that was ESPN having Sprint Cup pole-sitter Greg Biffle join Bestwick and Daugherty in the Infield Pit Studio during the Nationwide race. Essentially, this was ESPN promoting a NASCAR on Fox live race. Last season on ESPN the "F-word" was never even mentioned.

Now, Biffle joined the panel not only to promote the Cup race, but stayed to comment on the live Nationwide race in-progress. His comments were outstanding, and even with all of the ten voices on the telecast at that point, things never got out-of-hand. Very nice job by the Producer and Pit Producer.

The telecast struggled for a moment to understand why Matt Kenseth (the ESPN in-race reporter) was so upset when he had a solo spin late in the event. Credit goes to the TV crew for replaying all the angles and then following-up with Kenseth to finally determine that he was pretty upset with the pit crew and his pit stops.

The good old Darlington red flag played a role in this telecast, but viewers would not really notice because the conversation and information was flowing. Wallace and Petree had finally hit on a combination that let each of them express their own individual views without the issue of "who is right" having to be settled each time. That happened a lot last season.

To cap-off the race, ESPN used a classic camera angle seen for many years at this track and showed a big wideshot of the cars as they raced off the final turn and all the way to the start-finish line. Although there were only one or two side-by-side battles, this was the perfect way to let everyone see the lead-lap cars finish.

This telecast was notable for the new element of Wallace feeling free to directly ask Petree questions about crew chief oriented topics. The result was a strong performance from Petree, with many of those answers then followed-up by Tim Brewer in the Tech Center.

It seems that for once Brewer was not forced into the telecast, but used when he was needed to illustrate a point. The fuel issue at the end of the race on the restarts was a perfect example.

Even running late, the NASCAR on ESPN gang got the right interviews and asked the right questions. This Friday night in Darlington may finally be giving us a clue about the potential of this TV team to tackle the final seventeen ESPN/ABC Sprint Cup races down the stretch to the championship. It seems that right now the big ESPN NASCAR engine is finally hitting on all eight cylinders.

The Daly Planet welcomes comments from readers. Simply click on the COMMENTS button below and follow the directions. The rules for posting are on the right side of the main page. Thanks again for stopping by.
Posted by Daly Planet Editor at 9:17 PM 17 comments:

In-Progress At Darlington: "NASCAR Countdown" And Nationwide Series On ESPN2

Allen Bestwick will kick-off the Nationwide Series action on ESPN2 at 7PM Eastern Time with NASCAR Countdown. The pre-race show will be thirty minutes, and Bestwick will be joined on the set by Rusty Wallace and Brad Daugherty.

Wallace will then head upstairs to the broadcast booth where he will be alongside of Dr. Jerry Punch and Andy Petree to call the racing action beginning at 7:30PM. Dale Jarrett is off this week.

Down on pit road will be the usual ESPN2 reporters. Veteran Mike Massaro, Dave Burns, Jamie Little and Shannon Spake will be covering the very loud pit road during the event.

This should be some interesting action tonight, and an opportunity to see Wallace work with Punch and Petree once again. Last time Wallace was in the booth, he had Marty Reid as the play-by-play announcer. Tim Brewer will be in the Tech Center, and Matt Kenseth will be the ESPN in-race reporter.

This post will serve to host your comments about NASCAR Countdown and the Nationwide Series race on ESPN2. To add your opinion, just click the COMMENTS button below and follow the directions. The rules for posting are on the right side of the main page.

Thank you for taking the time to join us tonight for the pre-race show and the race.
Posted by Daly Planet Editor at 6:33 PM 76 comments: