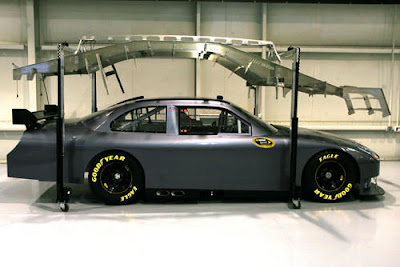 The change to the COT fulltime has resulted in many positive things for the sport from cost savings to increased safety. This weekend in Texas, the memories of the 2008 Michael McDowell qualifying accident were still fresh in the minds of many.

That said, the Sunday TV challenge for the NASCAR on Fox gang was simply to generate excitement on this high-speed track. Once again, as the teams struggled with the COT on the track, the announcers struggled on the air. It was an all too familiar scenario.

Jeff Hammond dressed up in his Western apparel and received some good-natured grief from both Hollywood Hotel host Chris Myers and some of the Cup drivers. There is nothing wrong with having some fun on TV and Hammond continues to be under-utilized in these telecasts.

Darrell Waltrip has become increasingly frustrated by the new breed of drivers now racing in the Sprint Cup Series. Sunday, Waltrip's emotion boiled-over in a feature aimed squarely at some of the top drivers in the sport.

Although sometimes making great points, Waltrip missed with this one. The days of brawling and outspoken drivers have been ended by the media and the sponsors. They will never return. This is a new generation.

The race quickly took on a personality that fans know all too well. Single-file COT cars on a 1.5 mile track slipping and sliding carefully between pit stops. The extended green at the top of the race took the wind out of the TV crew's sails and it never returned.

Larry McReynolds is always trying his best, but sometimes the lack of action on the track and the continual integration of sponsor elements just over-rides anything he can contribute. From the "Cheese-It Bite of the Race" to the continually useless sponsored racebreaks, Fox was overloaded with awkward sponsorships during the event.

Myers reads the highlights of the race and is often wrong in his summaries. Hammond gently corrects him and sets the scenario for the guys in the booth. Missing during these summaries are the pit reporters, who know the reality of what each team has been going through. Myers slows the telecast with every racebreak.

Returning this week was the pre-race Digger cartoon which made no sense at all after being gone for the past several races. Luckily, the animation of Digger was not intrusive to the race and Fox mostly used the Digger logo under green flag conditions. One final animation with ten laps to go was a bit much.

Also back on the TV screen was the use of four big video boxes for pit stops. This effect fills the screen and loses the perspective for the viewer of who is where on pit road. After two races of seeing Fox use the triple-split that allows for a live view of pit road, this transition was tough to take.

After seeing teams like Scott Speed, Jeremy Mayfield and Scott Riggs miss the race, Fox did not follow up with either Mike Bliss or Dave Blaney as those cars left the race right around the first pit stop. The "start and park" issue is larger this season than ever before and perhaps should have been addressed.

"Slow and steady," said Joy as he talked about the COT progress. He could have been talking about the telecast. It is rare to hear periods of silence on the Fox NASCAR coverage, but that was certainly the case on Sunday. The bottom line was there really was nothing to talk about. Sometimes, it looked like practice.

Several times the Fox team tried to go through the field, but they started from the front and did not get back very far. Once again, comments in the TDP chat reflected the fact that many TV viewers had chosen to go and listen to the radio coverage of the event.

Teams in the back are not suddenly less important than teams who happen to be in the front during a specific gas run. How many times in the telecast did drivers like Dale Earnhardt Jr., Jeff Burton or David Stremme just suddenly appear on the TV screen after having driven through the field to get back to the top ten?

It is the perfect right of Fox to concentrate on the leaders, to use the Racebreaks and to focus on the high-profile teams. They have been doing this for years and the Sprint Cup coverage is now a formula that the network is comfortable producing.

The flipside of this scenario is that NASCAR TV ratings are down and the sport is very different from the racing of five years ago. What needs to happen is the toughest thing for established TV networks to do. That is change.

Fox polished off the broadcast with good coverage of the final 25 lap sprint. A split-screen showing the winner slowing down and the field crossing the line was new. It certainly was better than simply showing the winner alone as the network did last season at this track. Several good interviews ended the coverage.

One week off and then Fox returns to racing at Phoenix. There are six races remaining in the Fox package before TNT begins their portion in Pocono.

Thank you for taking the time to stop by The Daly Planet.
Posted by Daly Planet Editor at 6:00 AM 86 comments: