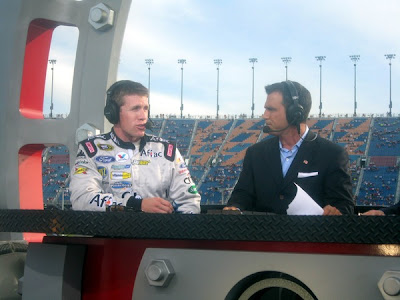 It certainly was a summer to remember for the NASCAR on TNT team. They lost their veteran play-by-play announcer after an internal dust-up at a hotel in New Hampshire. Then, the network got a tremendous present from NASCAR to spice up the traditionally boring TNT events. The new restart rules changed everything.

One trademark of the TNT broadcasts has been the simple and straightforward pre-race shows. Marc Fein has done a good job of letting Kyle Petty and Larry McReynolds have the spotlight this summer. Both Carl Edwards and Jeff Gordon stopped by for interviews this week.

TNT has paid tribute this year to NASCAR's history with the Pride of NASCAR series. This week, former driver Fred Lorenzen showed that his passion for the sport had not diminished over the years of his retirement. Matt Yocum handled this assignment with just the right touch.

Ralph Sheheen took a tough situation and made the best of it with his play-by-play ability. Replacing veteran Bill Weber was not easy and Sheheen pulled it off with class and dignity. From expecting to be one of four pit reporters to suddenly being the face of NASCAR on TNT, Sheheen certainly deserves a lot of credit.

The personality of the Chicagoland track was quickly on display once the race started. The TNT team kept the camera shots wide so that viewers could see groups of cars racing and eventually who the leader was about to lap. There was no real strategy involved early in the event, effectively muting Larry McReynolds.

It was up to Kyle Petty and Wally Dallenbach to keep the conversation going. Luckily, the production team continually peeled back through the field to tell the stories of those teams struggling and those on the move. TNT has also been very careful to treat Dale Earnhardt Jr. as just another driver this summer. That has been noticed and appreciated.

Now, after six TNT races it is hard to even remember the Fox hype and single-minded focus on Earnhardt and Kyle Busch. Even more amazing is the fact that the same TV producer handled both the Fox and TNT races. That certainly says a little something about the influence of the Fox Sports executives in what is shown on TV.

There were some tough moments in this telecast. From the beginning, the commercials inserted by the TNT Master Control were much louder than the audio from the track. TV viewers had to ride the remote every time a commercial break aired until just before the halfway point of the race.

When NASCAR waved the caution flag several times, TNT was unable to deliver the debris. That might not be a big issue, but certainly with the complexion of this event the famous mystery caution was going to be alleged. Once again, TV allowed the debate to continue.

Great pictures from the track only got better when the sun went down, but it appeared that TNT's announcers treated the Sam Hornish wreck rather casually. On TV, smoke seemed to be filling the driver's compartment and putting Hornish in danger. Simply by reassuring viewers that it was only tire smoke from the spin, a lot of fans would have relaxed.

The pit reporters meshed on this event and simply provided information whenever needed. The pit producer worked to integrate the reporters through pit stops both under caution and green flag racing. This was an outstanding feature of the telecast and continued with focused and timely interviews after the event.

NASCAR's restart present to TNT eventually paid off with some excitement in the closing stages of the race. This has been the best improvement of the season and took viewers minds off the sheer boredom of this gas mileage track. No fuel strategies came into play and the race was decided with some drama.

Mark Martin continues to be a popular winner, but Tony Stewart is the talk of the season. Stewart has been wonderful with both Fox and TNT so far this year. It should be very interesting to see how he reacts when the ESPN team comes calling in two weeks at The Brickyard 400.

TNT came into the sport this year at a time when fans desperately needed a change of pace from Digger, DW and the Fox attitude. Boy, did they deliver. Suddenly, boring races like Pocono and Sonoma were fun again and this TV team is a big part of the reason why. Petty is the star and his outspoken and technology-driven approach to announcing is going to be missed.

As TNT departs, please take a moment to add your thoughts on the Chicagoland race and the overall TNT coverage this season. To add your opinion, just click on the comments button below. This is a family-friendly website, please keep that in mind when posting. Thanks for taking the time to stop by The Daly Planet.
Posted by Daly Planet Editor at 1:00 PM 68 comments: