Your Turn: NASCAR On FOX From Phoenix 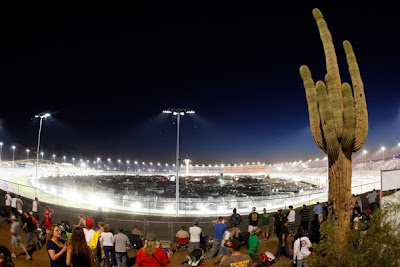 Note: At this time, we are leaving this post up as our primary discussion. There are some great comments and opinions below. Please add yours to the mix.

It was a very long night for both the TV crew and the fans. The new length of the Sprint Cup Series race from PIR was a bit tough to take. It certainly was a change.

Chris Myers unveiled a new version of the Hollywood Hotel. It featured sponsors and not much more. Gone was Slice of Pizzi and a featured driver interview. In was a long bracket selection show and several features on Subway serving breakfast.

The DirecTV Head-To-Head bracket competition was modeled after the NCAA and featured the NASCAR on FOX announcers awkwardly creating seeds for the drivers. NASCAR has absolutely nothing to do with head-to-head match-ups and the entire thing was poorly explained.

Darrell Waltrip and Jeff Hammond provided the commentary in the pre-race. Waltrip chose Dale Earnhardt Jr. to win and Hammond was guarded in his comments about a favorite.

The weather did not play a factor, other than the bugs in the desert. Pictures and audio were great. An early graphics error was caught and changed. There were no technical problems.

This is your opportunity after every Sprint Cup Series race to tell us how you liked the TV telecast. This is not a fan site. We are asking about the NASCAR on FOX presentation of the race from PIR.

We are a family-friendly site, so we would ask you to keep that in mind when posting. Thank you as always for taking the time to stop by The Daly Planet.
Posted by Daly Planet Editor at 9:00 PM 89 comments: