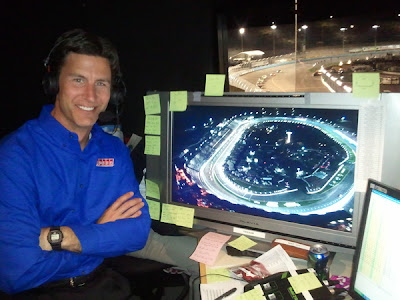 Here we go with a stand-alone truck race from the Texas Motor Speedway. This week, the trucks are racing with the IndyCar Series although Danica is not doing the doubleheader.

It's a smaller field of 35 trucks, so everyone who towed all the way to Dallas made the race. There are no big Sprint Cup Series names, so it could be a very different kind of TV event.

Rick Allen will call the race with Phil Parsons while Michael Waltrip is in Le Mans preparing for this big 24 hour race that can be seen on SPEED Saturday morning. Ray Dunlap and Hermie Sadler are patrolling pit road.

This is a production of SPEED's truck series team, so expect a solid telecast with good pictures and a focus on the racing. This TV team is still trying to figure out how to include social media in the telecast. Sadler and Dunlap updated on Twitter from the pits and Allen sends tweets in the commercials during the race. It's a start.

This post will serve to host your comments about the coverage of the race by SPEED. To add your TV-related opinion, just click on the comments button below. Thanks for taking the time to stop by The Daly Planet.