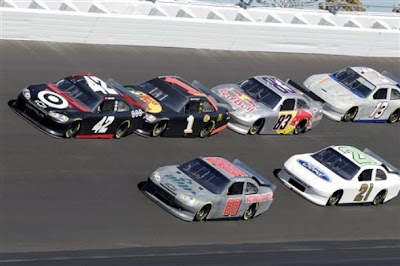 The week started off with a bang in TV land! Our friends at SPEED are changing things up this season for the January Daytona testing.

Here is the schedule from SPEED. It includes a mix of Internet streaming and TV:

Here is the official info that came out Monday afternoon:

SPEED and SPEED.com are presenting 23 hours of live testing coverage from Daytona Jan. 20-22 as the NASCAR Sprint Cup Series engines roar back to life in the month of January for the first time in three years.

“The most important thing we do at SPEED is cover the NASCAR season from the minute the cars first hit the track until the champion makes his acceptance speech at the banquet each year and everything in between,” said SPEED President Hunter Nickell. “We’re psyched that we get to start a little earlier now that Daytona testing is back, and based on what we heard from drivers at the Goodyear tire test in December, this is one test session you won’t want to miss.”

John Roberts and Jeff Hammond host SPEED’s on-air coverage from the studio above Victory Lane at Daytona. Steve Byrnes, Larry McReynolds and Darrell Waltrip will offer analysis throughout the practice sessions with reporting by Bob Dillner and Krista Voda. SPEED.com is presenting live streaming of all on-track activity with the exception of 3-5 p.m. ET Thursday, and will feature a rotation of on-air personalities.

Daytona testing coverage gives fans their first extended look at the new race surface at Daytona International Speedway -- a surface the racers expect will add to the level of excitement in February.

“It’s basically like going to a new track,” said four-time Cup Series champion Jeff Gordon, following the recent tire test. “What our engineers can do now with the cars is a lot more aggressive and totally different from what we have had in the past ... Now, it is all about speed, and I think it will make for more exciting race, more aggressive racing. I think you will be able to see us race three-wide lap after lap after lap.”

It looks like SPEED is trying to balance a Barrett-Jackson auction and Daytona testing with just one TV channel. This streaming is a great experiment and it should be interesting to see how mainstream NASCAR fans react to this approach.

We welcome your opinion on this topic. To add your comments, just click on the comments button below. This is a family-friendly website, please keep that in mind when posting. Thanks for taking the time to stop by The Daly Planet.