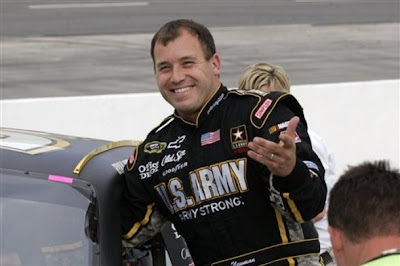 Update: We are going to leave this post open for your post-race comments. Just click on the comments button below. Thanks fans!

Here we go with a very big challenge for the NASCAR on ESPN production team. The Cup race is going head-to-head with NFL football and it is going to be a tough challenge.

Allen Bestwick will anchor a thirty-minute version of NASCAR Countdown beginning at 1PM ET. Rusty Wallace and Brad Daugherty will be with Bestwick in the Infield Pit Center. Pit reporters are Shannon Spake, Jamie Little, Vince Welch and Dave Burns. Tim Brewer is in the Tech Garage.

While Jimmie Johnson is the big story, there has been a lot of NASCAR news during the week that involves changes in personnel and teams. It should be interesting to watch what topics and interviews are selected for the pre-race show.

Jerry Punch has to call the action on a very long day at a very short track. That recipe has not proven to be a good one where ESPN is concerned. Punch will no doubt be assisted very actively by Dale Jarrett and Andy Petree as the race goes on.

Action happens fast at this track as the straights are quick and cars side-by-side though the flat corners almost always results in some rubbing. The ESPN team has struggled with both caution and green flag pitstops. This is not a good place to have that happen.

The race off pit road may well wind-up deciding the event and missing the action for full-screen coverage of only one car is going to make the TV team pay a high price. ESPN needs to hold the triple-split all the way through the caution flag stops and put all green flag stops in a double video box so the race can be seen.

There is real potential for things to get confused very quickly on TV as ESPN keeps the spotlight on the Chase drivers regardless of what is happening on the track. This should be a fascinating race to watch from a TV perspective.

We welcome your comments on the race. To add your opinion, just click on the comments button below. This is a family-friendly website, please keep that in mind when posting. Thanks for stopping by.
Posted by Daly Planet Editor at 12:29 PM 503 comments: 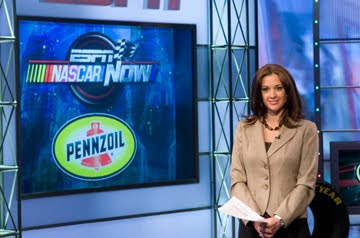 This post will serve to host your comments on NASCAR Now and RaceDay. To add your TV-related opinion, just click on the comments button below. This is a family-friendly website, please keep that in mind when posting. Thanks for stopping by.
Posted by Daly Planet Editor at 9:32 AM 29 comments: