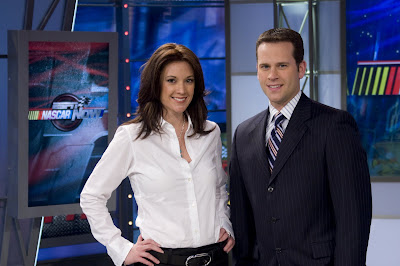 Here are some end-of-the-week updates on TV-related topics:

Ryan Burr - Many fans asked what was going to happen to the former co-host of NASCAR Now since ESPN announced he will not be returning to that position for 2009.

Burr passes along that he is doing great at ESPN and is currently an in-studio host for college basketball games. He also has his own show called Midnight Madness on ESPN2 that recaps the day in college hoops.

Burr joined ESPN in 2005 from FSN's regional sports network in Pittsburgh, PA. He worked very hard to help ESPN recover from the disaster of Erik Kuselias and Doug Banks who were the original hosts of NASCAR Now back in 2007.

Even though it was clear that NASCAR was not a sport he knew well, Burr maintained a professional news approach during the programs and was part of the team that turned the once laughable series into a credible one for ESPN2.

Burr was also a regular reader of TDP and enjoyed your comments, both good and bad. Good luck to Ryan as he leaves ESPN's NASCAR coverage.

Nicole Manske - Congratulation to Manske for a big change in her life during this off-season break. Here is the story from the Associated Press:

The 27-year-old Briscoe, who won three races and finished fifth in the IRL standings last season, popped the question during a vacation with Manske in his native Australia over the holidays. The engagement was announced Wednesday by Team Penske.

The couple is planning a wedding next December in Hawaii, a location chosen because it is halfway between their families' homes in Sydney, Australia, and Roscoe, Ill.

Manske will return along with Mike Massaro and Allen Bestwick as one of the three co-hosts of NASCAR Now on ESPN2 in 2009. Bestwick will host the Monday one-hour roundtable shows while Massaro and Manske will alternate between reporting from the field and hosting duties in the studio.

Mike Massaro - Click here for a great article by the Hartford Courant's Shawn Courchesne about Mike Massaro. Courchesne points out that Massaro is a Connecticut native from the Manchester area and has both an educational and work history in the area. His transition to ESPN's headquarters should be a smooth one.

It does not take very long for NASCAR fans to drum-up memories of Massaro during the time that ESPN was on the outs with NASCAR. Standing outside the tracks, along the roadways and even at the airports, Massaro was a picture of determination as he single-handedly kept the NASCAR profile alive on ESPN during a very tough period. Good luck to Mike on his new assignment.

The SPEED Report - TDP wants to make sure fans understand the recent story about this TV series. SPEED was actually planning to be on-the-air this Sunday at 7PM with the first show from the new SPEED studios all along.

TDP got information from both the SPEEDtv.com website and one other source indicating the first live show should have been this past week. What was listed on the SPEED website as a live show was actually a rehearsal.

So, thanks to SPEED for helping to clear things up and we look forward to Bob Varsha, Leigh Diffey and Fox's Jeff Hammond live at 7PM ET this Sunday from the new SPEED studios with the first show.

TDP is working on getting photos of the news studio and control rooms. We will pass them along as soon as they arrive.

SPEED HD - TDP is working with SPEED to get a handle on the transition by the cable systems to SPEED in High Definition. We will have a full update next week.

Thanks again for stopping by, we invite your comments on the topics mentioned above. Just click on the COMMENTS button below. The rules for posting are located on the right side of the main page. Have a great weekend.
Posted by Daly Planet Editor at 6:00 AM 13 comments: