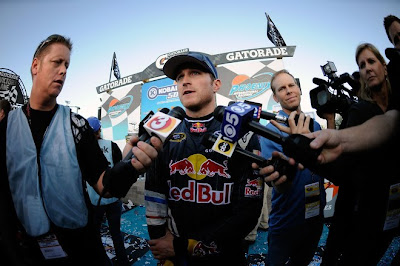 The rain cleared out, the sun began to shine and the Chase was tight. It turned out to be a very nice day for a NASCAR Sprint Cup Series telecast from Phoenix.

Nicole Briscoe led Brad Daugherty and Rusty Wallace through a pre-race show that featured three themes. They were the Chase, this race and Kyle Busch. The Chase got plenty of attention, the track condition was reviewed and finally both studio analysts gave their opinion on the Busch situation. It was interesting.

Allen Bestwick, Dale Jarrett and Andy Petree were in the TV booth. These three had plenty of action in the early going with accidents and incidents happening constantly on track. The early coverage was wide, informative and on target.

Shortly after halfway, ESPN returned to "hyper-tight" coverage where the announcers simply talk about the racing as if they are watching from home. Rarely did Bestwick call a lap like an announcer. Rather, he introduced topics that Jarrett and Petree then discussed.

Camera shots were changed to the single and double-car coverage that quickly lost any on-track perspective fans watching on TV had from earlier coverage. ESPN has a script and they went back to it. Despite flashes of groups of cars racing hard, the TV coverage went back to the leaders and the two top Chasers.

The booth announcers showed flashes of personalities and opinions when Brian Vickers wrecked Matt Kenseth on camera. It just so happened that the ESPN script had been focused on Kenseth at that time. This was the only outspoken moment of the race for Jarrett and Petree.

In this telecast, there were often five graphic bars and tickers on the screen offering all kinds of information for TV viewers. Sports scores, a NASCAR ticker, Chase points and race status were all on the screen at the same time. It had that CNBC feel when the stock markets are open.

Down the stretch, the TV team was just as out of gas as the cars. The event ended with an understated Bestwick talking in a monotone as Kasey Kahne won the race. For the final few segments, coverage consisted of single shots of the leader coupled with side-by-side video boxes of the crew chief.

Instead of slamming action on a single-groove track, it was a non-Chaser taking the race and the top two Chasers finishing second and third. Luckily, Kahne is a popular driver who is moving to a top team next season. It might have been the last time we ever see a Red Bull car win a race.

What ESPN misses is perspective. One comment on the live blog said it was the best race we never saw. Simply isolating on a car or two at a time removes any sense of speed, excitement or real racing action. It's just a shame that TV simply will not widen out, go to the best racing on the track and tell the stories of all the teams equally. That familiar refrain has fallen by the wayside once again.

This post will serve to host your comments about the TV coverage of the Sprint Cup Series race from PIR on ESPN. To add your opinion, just click on the comments button. As always, thank you for taking the time to stop by and add your views.