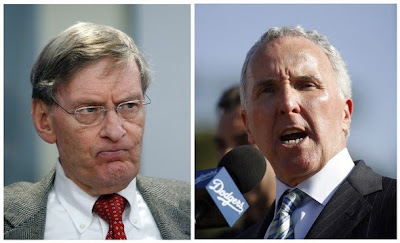 It was a shock to hear that Major League Baseball had taken over the day-to-day operations of the Los Angeles Dodgers. Team owner Frank McCourt, seen on the right, needed a $30 million loan from LA-based FOX TV just to meet his payroll last week.

Apparently that forced the hand of MLB commissioner Bud Selig, seen on the left. The Dodgers issue was only the tip of the baseball iceberg. The NY Mets lost $50 million last year and are well on the way to a potential financial collapse with comparable losses this year. Los Angeles and New York are the two top TV markets in the country.

Over on the hardwood, NBA Commissioner David Stern has divulged that 22 of his teams are on track to lose an estimated total of $300 million as the season winds down. There is little doubt that the NBA and the players may be headed for an extended lockout once this season is over.

Meanwhile, NASCAR's number one competitor is already in a lockout. The NFL and it's player's association are not even in the same ballpark on a new collective bargaining agreement. Since both financially healthy parties continue to do nothing more than posture, there is a very good possibility that there will be absolutely no pro football on the field at the beginning of this season.

The most recent shocking sports story happened two weeks ago. The owners of PokerStars, Full Tilt Poker and Absolute Poker were arrested by the FBI. The online gambling websites run by those companies were shutdown. The FBI alleged that the sites laundered money and defrauded banks to get around gambling laws. The money in question is said to be in the billions.

This put an immediate stop to many of the poker shows on TV. ESPN, NBC, Fox Sports and The Game Show Network all used a portion of the $26.8 million spent on TV advertising by the indicted companies to sponsor these series. There is little doubt that things are about to change forever in poker-land.

Finally, a while back TV viewers tuned-in to see 35 year-old Tiger Woods come from behind and win The Masters Tournament. It never happened. The wheels came off for Woods again and golf fans are now left with the usual cast of characters. Woods' TV profile has changed radically. No longer Superman, just another golfer.

NASCAR has basically been handed a golden opportunity to recapture the slice of the sports TV market that has been lost over the past five years. Dale Earnhardt Jr. emerging from his slumber, the new Kyle Busch looking to put his stamp on the sport and Carl Edwards trying to flip his way to a championship are just a few of the topics that have come forward this season.

After Easter the sport will head to one of the most fan and TV-friendly tracks on the circuit. With ESPN out of the picture with a scheduling conflict, SPEED and FOX will be charged with delivering a NASCAR tripleheader. That's right, a tripleheader.

Richmond International Raceway will have Denny Hamlin's charity late model showdown on Thursday night at 8PM ET. For the first time, it will be televised live by SPEED. This is a great opportunity to warm-up the crowd by letting them see a wide variety of NASCAR drivers from different series interacting on and off the track for a good cause.

Friday night brings the only Nationwide Series race ever produced and televised by SPEED. The network had played host to an ESPN-produced telecast after a rain postponement, but this is different. It's a NASCAR TV showcase.

SPEED has paired Darrell and Michael Waltrip in the TV booth with Rick Allen for the coverage. Ray Dunlap, Hermie Sadler and Krista Voda are the pit reporters. Any way you slice it, there's going to be a whole lot of talking going on.

Saturday night FOX has a chance to step away from the two-car drafts and get NASCAR back to the side-by-side short track action that fans love. It's going to be important for Darrell Waltrip to let Mike Joy call the racing. Fans need to be reminded of what a difference a strong TV play-by-play announcer can make to a telecast.

That reminds me of a certain Daytona 500 when a blizzard across much of the country made it the only live sporting event on TV. I seem to remember a strong play-by-play announcer, some great racing and some post-race festivities making a big impression on a lot of people. It seems that formula has some history. 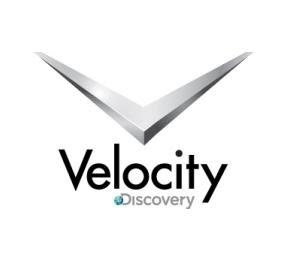 You may have stumbled across a channel on your cable dial called Discovery HD Theater. The network is an eclectic mix of car shows, motorsports and adventure programs. It is even the TV home of the WRC rally series in the US. When my remote brought me to that location, I often came to a screeching halt.

It certainly looked like Discovery was putting something together for the future. Money was being spent on programming and resources were being used for production. A national HD channel was being cleared for new programs. Something was bound to happen. Now we know exactly what was in the works.

Discovery Communications is a monster. The corporation likes to use the term "The world's largest nonfiction media company." The programming content distributed in all kinds of categories spans the globe and touches 180 countries. The corporate headquarters are in Silver Spring, MD.

Most recently in the headlines was Discovery teaming with Oprah Winfrey to launch OWN. That's right, the Oprah Winfrey Network. The talkshow superstar is expanding her brand into an entire 24-hour cable network aimed at the kind of demographic she has been able to attract for years. Having a loyal audience is the key to this entire equation.

On the heels of OWN, Discovery finally confirmed what had been rumored for a long time. In the fourth quarter of this year, Discovery HD Theater will become a stand-alone HD cable network called Velocity.

At this point, you may be asking why this news item is appearing on a NASCAR TV blog. Before we answer that question, let's hear from Discovery's President David Zaslav.

"Velocity continues Discovery's tradition of maximizing the value of each of its cable platforms," said Zaslav in a media release. "It is going to be a game changer when it officially joins our portfolio of U.S. networks later this year. As the first network devoted to the upscale men's market, Velocity will be a hub for viewers within this key demographic, as well as the wealth of advertisers that target them."

So, what Discovery has been slowly piecing together is a line-up that appeals primarily to men and involves cars, motorsports and adventure programming. I wonder where they got that idea?

Currently, Discovery HD Theater is in about 40 million cable homes in the US. Expect this number to start to creep up now that the announcement has been made of a full-blown cable network with original programming starting in September. Helping that growth is the name behind the project.

Bob Scanlon is a familiar name in cable TV circles. After leaving ESPN with several other top executives, Scanlon began to assemble a new cable network from scratch as the Vice President and Executive Producer. Based in Stamford, CT it had an interesting mix of programming. There were cars, boats, airplanes and motorcycle shows. The name of the network was SpeedVision.

When SpeedVision launched in 1996 it quickly became the fastest growing cable network in history. Never before had the ratings folks seen such a strong male demographic drawn consistently to one cable TV network. It was clear from the start that SpeedVision was going places.

In the summer of 2001 News Corporation came calling and Rupert Murdoch bought one-third of the company. In August of that year, he leveraged a buyout that gave him majority ownership and control. As FOX arrived and changed the name to SPEED Channel, Scanlon departed. Such is the nature of the television business.

Now ten years later, Scanlon is back and Velocity is ready to go. "In the same way that a car once defined the person who drove it, Velocity will define the viewer who watches it," said Scanlon. "Whether you are a car aficionado or just someone who prefers fast-paced, high-stakes television, Velocity will become a must-have entertainment destination."

To many NASCAR fans, Scanlon is known for something else. A very long time ago and with very little money in the budget, Scanlon commissioned a NASCAR talk show from a dingy little studio in an industrial park in Charlotte, NC.

Inside Winston Cup Racing on Monday nights featured an unlikely cast of characters. Johnny Benson looked like a Midwestern accountant. Kenny Schrader was a wily racing veteran who had a wicked sense of humor and a touch of mischief in his soul. Michael Waltrip was completely off his rocker.

By putting that trio in a controlled environment and challenging host Allen Bestwick to maintain order, the TV series became a cult hit. There had never been anything like it on the air before. It served to introduce NASCAR fans to the other forms of racing on SpeedVision. It worked like a charm.

Monday, Scanlon confirmed to The Daly Planet that he is currently working on a new original television project for Velocity with the NASCAR Media Group. After all the frustrating years of SPEED turning down NMG projects, it seems ironic that things may have come full circle.

NASCAR desperately needs new and original TV programming out in the marketplace other than just the races or news shows. Velocity will be a network driven by high-end HD programming. This is exactly what NMG loves to produce. Many of us can recall several series cancelled by SPEED that later won awards for production.

There is little doubt that Scanlon intends to make Velocity the newest NASCAR TV partner. Scanlon also made it clear that he is open to ideas and discussions about other motorsports and adventure programming. That is even better news for independent TV production companies like the ones owned by Tony Stewart and Dale Earnhardt. Jr.

There is nothing like having the top executive of a new cable network launched under the Discovery umbrella saying he is open to new programming ideas. Come September, we may find ourselves with a new TV player in town chasing many of the same eyeballs as the current NASCAR TV partners.

The big difference this time around is that the guy actually driving the bus has made this trip before. He knows all the bumps, sharp turns and obstacles along the roadway. Scanlon and Velocity may be just the TV shot in the arm that NASCAR needs this year. We will keep you posted as the news continues to develop on this new network.

Disclosure: I worked for Scanlon at ESPN for several years in the 1980's. Later, as a TV consultant, I was hired to assist SpeedVision in ramping-up for the launch of the network. Subsequently, I provided programming to SpeedVision as a producer. I currently have no association with Scanlon or the Velocity network.