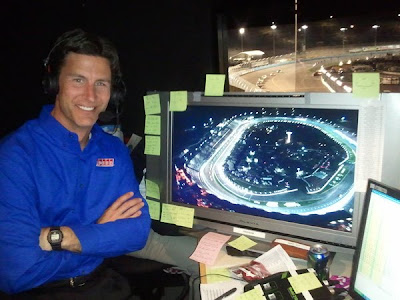 This is a little bit of a different week in NASCAR TV land, so here are the latest updates as the circus heads to suburban Richmond, VA.

Friday night ESPN2 will be covering the second and third rounds of the NFL Draft from New York City. The network will have no event production presence at RIR and SPEED will produce the Nationwide Series practice, qualifying and race.

Lead Reporter Marty Smith and reporter Shannon Spake will be in Richmond to provide news coverage for ESPN's networks. Nicole Briscoe will be hosting NASCAR Now on ESPN2 at 5PM ET Tuesday and Wednesday. Thursday's show is at 10PM Pacific, 1AM Eastern Friday morning. The one-hour Sprint Cup Series preview show will be at noon ET on Saturday.

Rick Allen, SPEED's play-by-play announcer from the truck series, got the call to work the Nationwide race on Friday night. That was the good news. The other shoe dropped when SPEED announced that it would be Michael and Darrell Waltrip joining Allen in the TV booth. Allen may have his work cut out for him keeping the telecast on track with all that Waltrip family enthusiasm in the booth.

SPEED tapped Krista Voda, Hermie Sadler and Ray Dunlap to cover pit road and handle the reporting duties for qualifying and practice. SPEED's solid coverage of the truck series should serve as a great foundation for this weekend's Nationwide production.

Before the SPEED folks head to Richmond, there is a full week of Race Hub shows at 7PM ET. Tuesday features Nationwide hot shoe Ricky Stenhouse Jr. as the in-studio guest, but Wednesday packs a surprise. Kyle Busch is stopping by the studio to chat with host Steve Byrnes. Certainly, SPEED would like nothing more than to get Busch comfortable with the concept of "just dropping by."

Thursday night at 8PM ET SPEED is going to cover Denny Hamlin's late model showdown from RIR live. A diverse group of drivers is going to participate in this charity event. Formerly held at Southside Speedway, the closing of that track this season put RIR in play and SPEED just happened to be there with all the TV equipment.

Mike Joy is going to host the telecast with Kenny Wallace and Ken Schrader in the TV booth. Both of the Kenny's have a long history of late model racing and should make it fun. Bob Dillner and Dick Berggren will handle the reporting duties.

On Friday from Richmond SPEED will produce two new Trackside shows. Matt Kenseth will be the guest for the live show at 7PM ET before the Nationwide Series race. At 10:30PM, David Gilliland will be the featured interview in another thirty minute show. Regardless of Darrell Waltrip's desire to be featured on endless SPEED TV shows this season, Trackside is just not the same without Larry McReynolds.

SPEED continues to record the Victory Lane show after the Sprint Cup Series races that happen on Saturday nights and hold it for airing on Sundays at 8PM ET. This is the schedule for this weekend. Even if the race ends at midnight ET, there are certainly fans who would like to see an hour of interviews, comments and highlights. Especially the ones in the Central and Pacific time zones.

Click here for a peek at the new Sports Broadcasting Hall of Fame website. It's a nice group of TV veterans from different sides of the business. In addition to having voting representatives, NASCAR also has the likes of the late Jim McKay, Keith Jackson and George Wensel who directly affected the early TV days of the sport.

We invite your comments on these topics. To add your opinion, just click the comments button below. This is a family-friendly website, please keep that in mind when posting. Thank you for taking the time to stop by The Daly Planet.