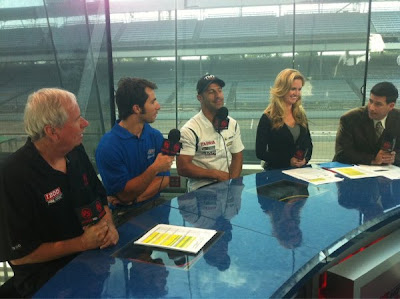 NASCAR fans may remember back in 2007 when ESPN supported its new NASCAR TV contract by launching a daily show called NASCAR Now. In a word, it was horrible. Two hosts with no NASCAR experience, a hype-driven agenda that was embarrassing and a complete lack of respect for the sport.

Now, five years later, NASCAR Now is a flagship motorsports series. Good hosts, solid reporting and updated information that is passed along seamlessly. That series has become a part of the NASCAR TV landscape.

After much poking and prodding, SPEED finally jumped into the same mix and created NASCAR Race Hub. Expanding on the Monday one-hour show the network produced for years, SPEED finally flexed some TV muscle. Again, it took several tries to get it right. Now, Steve Byrnes is firmly entrenched as the host and the show is running at full speed.

Last weekend many NASCAR fans took the time to cross-over and watch the open-wheel gang run the Indy 500. Here at TDP, we hosted a live blog that resulted in many positive comments about the series and the racing. The Indy 500 is to IndyCar what the Daytona 500 is to NASCAR. It's a spectacle that attracts all kinds of new fans.

Needless to say, the drama of the final laps came to a head when JR Hidlebrand hit the wall on the final turn and Dan Wheldon just got past him before the caution lights came on. It was a big win for Wheldon, who only had a one-race deal for this season. Hildebrand was a gracious loser on TV.

The IndyCar series has a handful of races on ESPN and ABC, including the Indy 500. The bulk of the season is carried on VERSUS, a cable network with an identity problem that can best be described as disjointed. VERSUS grew out of the Outdoor Life Network and has tried to be all things to all people. It's not working.

This season, IndyCar also put a toe in the TV water with a new series called Open Wheel Weekly. It aired on Tuesdays in what we like to call the "DVR Theater" timeslot. That is 4PM on the East Coast, 1PM out west. The programs were also made available online to registered IndyCar.com members and re-aired on VERSUS at 11PM Pacific Time.

The picture above is driver Tony Kanaan goofing around off-air with fellow driver Bruno Junquiera and the Open Wheel Weekly announcers. Robin Miller is well-known to most fans because of his work with SPEED. Kevin Lee and Lindsay Thackston co-host the program.

After a sparkling Indy 500 that attracted a lot of news fans, the only weekly TV series that focuses on the IndyCar Series was abruptly cancelled. The official word is on hiatus but that is just a TV term that means Open Wheel Weekly may possibly return in the future. There was no show on Tuesday.

It doesn't take a rocket scientist to figure out that perhaps the week after the biggest race of the season might not have been the best time to cancel the series. With no race this weekend, the exposure that a TV show airing nationally and available online would bring was fundamentally important.

Sure, it was on at 4PM for the East Coast. Sure, it's a blip on the radar in the big picture, Sure, it's not critical to the survival of the series. But having a long-form TV show where IndyCar could put it's best foot forward only days after the biggest race of the year in many ways is priceless.

Put it on YouTube. Plaster it on Facebook. Tweet to every IndyCar fan on Twitter that the show is available online. Make it a front page link on the IndyCar website. Social media and Internet users have a habit of taking something small and making it very big.

ESPN is so desperate for TV exposure for its IndyCar races, the series is included in the NASCAR Now program. Drivers are interviewed, races are promo'ed and the ongoing Danica story is always updated.

If the ultimate goal of IndyCar is to coordinate a future TV package with Comcast using NBC and VERSUS as the key networks, the sanctioning body had better get hopping on returning a "support show" to the air.

Despite the issue of cost, history supports the fact that a series like Open Wheel Weekly needs time to develop and mature just like NASCAR Now and Race Hub.

Had I watched Open Wheel Weekly this Tuesday and heard from Miller, Wheldon and Hidlebrand it would have reinforced my interest in the series. Had I been shown some behind-the-scenes video and sound from the race it would really have been a treat.

Instead, I am only planning to watch the Indy500 next season. Those memories are still fresh. After all, I saw it all on TV.