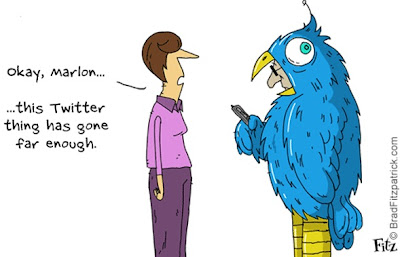 Updated: Told NASCAR and Twitter will be unveiling the new "landing page" for users of the #NASCAR hashtag sometime on Thursday. For you social media types, keep an eye on twitter.com/#nascar to see how this project of embellishing the #NASCAR hashtag experience on race day may look.

The idea of establishing a page for both users and non-users of Twitter as a dedicated "second screen" during the race is a bold one. It's a totally new concept and one that may bear watching if it takes off. The column below details the idea and what both Twitter and NASCAR want from the project.

Original column from Tuesday: Marlon and the other 500 million Twitter users around the world are about to get a little more NASCAR in their lives. Being unveiled this week is a new "landing page" on Twitter that will allow fans to get a lot more race information with one click.

Even though this column will use phrases like embellished hashtag, curated tweets and second screen the fact is that the bottom line is easy to understand. There is now so much information flowing on Twitter during Sprint Cup Series races it makes sense to manage it.

Many NASCAR fans use a second electronic device in addition to the TV while watching the races. Smart phones, laptops and tablets are part of what is called the second screen. That simply means that while watching the race on the TV screen many of us are actively involved in using another screen for more interaction and information.

The program of choice on the second screen for NASCAR fans has become Twitter. It is faster than Facebook, more flexible than texting and puts any live website-based chat into the weeds in terms of ease of use. Drivers, teams, racetracks, NASCAR officials and many other parties use Twitter to get information out to fans on race day.

On Twitter, users build timelines by selecting other users they want to follow. Tweets from all those users automatically pop-up in the timeline. It makes Twitter unique for every single user. Now that NASCAR has become so populated with various users sending information to fans, it's almost impossible to manage the volume.

One feature of Twitter is called a hashtag. This was created to allow users to focus on one event without changing their own timelines. By typing #NBAPlayoffs into Twitter's search box, all of the tweets that are being made about the live NBA game in progress can be seen. Once the game is over, users simply click back to their own timeline and return to the normal flow of information they had built.

The popularity of the #NASCAR hashtag during a Sprint Cup Series race is amazing. Any Twitter user can simply type #NASCAR at the end of a tweet and suddenly their opinion is automatically published side-by-side with teams, media members and even the NASCAR officials managing the race.

To focus on this issue, NASCAR is partnering with Twitter to enhance the #NASCAR hashtag during Sprint Cup Series races beginning this Sunday in Pocono. The idea is simple. Let the Twitter professionals look at the big picture of everything coming down the pipe about the race. Then, point the tweets that can embellish the fan experience over to the #NASCAR hashtag. That is not going to be an easy task.

The theory is that a Twitter editor/producer will be able to embellish the existing flow of information by picking and choosing featured tweets and highlighting them within the #NASCAR hashtag stream. If that sounds complicated, it really isn't.

Monday I spoke with Twitter executive Omid Ashtari about this new project. We recapped some issues fans had been discussing and focused on what both Twitter and NASCAR wanted this agenda to be.

Here are some hot button topics he addressed:

NASCAR: Twitter is providing the editor/producer for this project. NASCAR is not involved in what tweets are gathered and redistributed. The project will be coordinated from the Twitter offices.

TNT: The NASCAR TV network showing the race can sample any tweets from the #NASCAR hashtag stream, but there is no direct contact between the parties. There will be no promotion of TNT programming. The tweets selected for the hashtag stream will be NASCAR-related.

Advertising: There is no advertising being integrated into the hashtag stream and that is not on the agenda. No Twitter, NASCAR or TNT advertising will be added.

Editing: No tweets selected to be added to the hashtag stream will be edited.

Goal: The goal of this project is to embellish the existing #NASCAR hashtag stream with timely tweets from various NASCAR users throughout the Twitter universe. Many of those users are not involved in the hashtag stream, so their tweets will be added by the Twitter editor/producer.

The idea is to make the #NASCAR hashtag the place to be during the race for both Twitter users and non-users. The non-users will be able to view the stream at the twitter website, while the users will continue to be able to contribute through their own accounts.

Ashtari referenced that there is a wealth of NASCAR content during the races that simply goes to waste. By grabbing that content and adding it to the #NASCAR stream it may create an amazing second screen of content for fans. It certainly is an interesting concept and one that may pay big dividends for NASCAR if it picks up speed with the fan base. We will update this topic again before the weekend.

Please add your comments or questions on this topic. Comments may be moderated prior to posting.
Posted by Daly Planet Editor at 6:00 AM 23 comments: