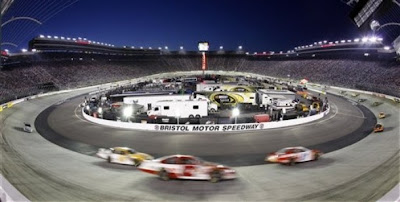 Hundreds of comments. Tons of email. Endless Twitter messages. The two Bristol night races normally make for fantastic television viewing. Apparently, many NASCAR fans did not feel that way after this year's races were done.

This is a very strange time to talk about NASCAR TV. It is the time of the season when ESPN is producing both the Nationwide and Sprint Cup Series events. The summer experience of TNT is over.

Click here to read a recent article from Phil Mushnick of the New York Post. The column is titled "ESPN Destroying Live Game Telecasts." It relates to the larger agenda of ESPN superimposing on live sports the agenda of the network, regardless of the impact on the TV viewers.

Mushnick explained in an email to TDP that he often hears from NASCAR fans in addition to his stick-and-ball regulars. The messages from fans on this TV topic were the same. The enjoyment of the telecast had been muted by a set of circumstances. It most often involved too many voices, too many graphics and too many promos from ESPN. The focus of the telecast was simply not the event.

Wednesday, Mike Joy and Dick Berggren teamed-up to televise a Whelen Modified Series event from Bristol on SPEED. The coverage was simple, effective and exciting. That was followed by a Camping World Truck Series race that was presented in the same manner.

These two races served as an interesting TV comparison once ESPN took to the very same track for the Nationwide and Sprint Cup Series events. The difference was night and day.

Saturday night during the Sprint Cup Series race, ESPN shifted into full "Chase for the Championship" mode. Bright colors on the scoring ticker represented who was in, who was out and who could possibly be in the Chase. The "possibly be in" part seemed to be as defined by ESPN's team of mathematicians.

As detailed by the fans in the hundreds of comments, the ESPN telecasts from Bristol self-destructed once the racing began. Scripts are out the window when the green flag falls and this has proven to be the undoing of the TV production team. The battle is between what is actually happening and what the TV network "wants" to happen.

Unfortunately, ESPN is not delivering on their end of the Sprint Cup Series bargain, plain and simple. This portion of the NASCAR TV contract has not been fulfilled. The television coverage is substandard and embarrassing.

What Mushnick said about the Yankees vs. Red Sox game applies to NASCAR. "ESPN destroyed another telecast that viewers were eager to watch." Now, it's NASCAR's turn to admit this problem and fix it. There are two races left before the Chase telecasts begin on the ABC television network.

TDP welcomes your comments on this topic. To add your opinion, just click on the comments button below. This is a family-friendly website, please keep that in mind when posting. Thank you for taking the time to leave a comment.
Posted by Daly Planet Editor at 8:00 PM 98 comments: