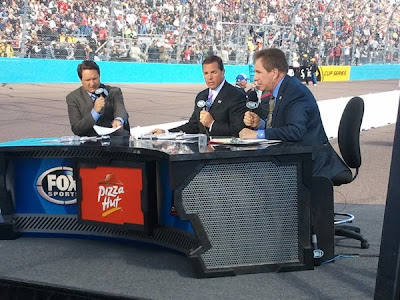 In 2010 we started to offer a platform for fans to voice their comments immediately after TV coverage of a Sprint Cup Series race.

Last March, over one hundred fans stopped by after the NASCAR on FOX coverage of the spring race from the Bristol Motor Speedway. The topics they raised were diverse, but several threads ran through the posts.

Presented without comment, here are excerpts from some of the comments as they appeared that day. Click here to read the entire post and fan comments.

On the topic of announcers:

"No one is CALLING the race!! All they do is chit-chat like teenagers at a high school dance. 16 years of watching NASCAR shot to hell!" (from John P.)

"I would love it dearly if Mike Joy would have told Darrell Waltrip about lap 178 to shut up & let him call this race. It never happened. Replay is not the same as seeing it happen live. We saw lots of replays. Even when Fox was "showing the race" reporters Tweeting from the track got word out about cautions & who was involved before TV bothered to tell us." (from JoJaye)

"I have no idea why Fox has 3 guys in the booth and reporters on pit road. It certainly isn't to keep viewers informed about what is happening on the track! Has someone at Fox lost the memo about going 'through the field'? Very few explanations about cars that went forward or back during the race, so I had no clue what happened." (from Sally)

"The disconnect between the camera shots and the TV booth was startling. Cars would be shown on the screen but the announcers were talking about something completely different. At first, I tried to make a connection but soon realized there wasn't any to be made. The TV truck was calling for shots & the booth was talking about something unrelated. One or both sets of individuals was failing the TV viewer each time that happened." (from Red)

On the topic of producing and directing the race coverage:

"I'm a NASCAR viewer from the days of 'Wide World Of Sports'. There is too much dependence on special cameras. I don't see that the ground-cam gives us any additional knowledge. The bumper cams can be useful, but too often we just see that one car is close to another. A medium shot of both cars could have established that. If there's an incident, look at all of the possible replays and pick the best one. ONE in-car, ONE wide-shot. I don't need to see the accident from every in-car camera in the field. Show me the shot that adds information." (from Don)

"Is it against the rules to show fans in the stands in order to get a wider shot of the action? What's the point of HD if you're focusing in on one or two cars at a time? I'd think with HD technology today they could probably show at least 10 cars at a time to allow us to see all the racing - and we'd still be able to read the ads on the cars. Instead they "zoom" us back to 4:3 days by zooming-in on two cars at a time. It just doesn't make sense. During the pre-race show they had this really cool live shot of the entire race track from the top of the stadium - stands, track, and all - that would have been even more cool with the race going on. Show us some racing from the blimp. Allow the "crank it up" cam to see the entire field go by. Mix it up a bit. Watching one car go around the track and talking about the driver in it doesn't equate to going through the field. Going through the field is telling us when a position is being fought for. What's going on with the drivers fighting for 35th in points? We never heard any of that." (from James)

"The coverage has gone from bad to worse. Locking in on the same dozen cars, in-car shots that are uncalled for, roof cam shots that are unnecessary, and managing to miss action on the track because someone is asleep at the wheel in the production truck is unforgivable. But by golly they'll make sure the plugs for the gopher are correct." (from TheMadMan)

Fox showed the winner and the next three cars finish the race on the TV coverage. Here are some comments on that topic:

"I love how those TEN SECONDS it would have taken to show the whole field finish were far too valuable for the Fox director. TEN SECONDS!" (from Anon fan)

"I want to see the cars cross the start finish line at the end of the race, it's why I bothered to watch all day, to see them cross the finish line and what order they did it in. Instead I'm seeing the inside of the 48 car or the crew celebrating. I'm no longer "hooked" on NASCAR TV and if I was a new fan, this would not make me come back next week." (from Gina 24)

"I understand the race ran over, but for crying out loud, would it kill you to show the cars crossing the line. I don't give a rat's behind about the joyful crew of the winner. I want to see where my favorites finished. And why did you post the graphics before the race ended? Did you NOT know what lap it was? I did." (from TexasRaceLady)

"The final 3 laps were poorly produced. The finishing order was posted before the race was completed and only the first five cars were shown finishing before there was a cut to the winner's in-car camera while the top five's faces remained across the top of the screen. I had to go to a website to get the actual finishing order." (from Red)

"I was livid when Fox failed to have the courtesy to show all of the cars finish the race. This is especially maddening at Bristol where a lap only takes about 16 seconds. Why they did not take that small amount of time to show the field coming across the line when that would miss only moments of JJ's celebration is beyond my comprehension." (from KoHoSo)

Fans wanted more focused commentary and less story-telling from the announcers in the booth. More information from the pit reporters was also a concern. In the race, using wideshots instead of in-car cameras and shots of single race cars that forced FOX to replay most of the important moments was a hot topic. Finally, the lack of showing all the lead lap cars racing to the finish was a very popular issue.

Sunday's race coverage starts on FOX at 12:30PM ET. The same broadcast team, including producer and director, returns for this telecast. The green flag is scheduled to wave at 1:13PM.

This post is simply meant as a reminder of the challenges TV viewers faced last season on this event. Each new year brings a fresh start and it should be very interesting, with the above fan comments in mind, to see how the NASCAR on FOX team handles the race telecast.