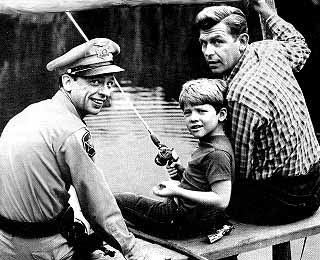 Sheriff Andy Taylor is going to come over and investigate as soon as he is done fishing. Time goes by slowly in some places and certainly Pocono is one of them. Almost everyone agrees this race is too long, the track is pretty boring and making good TV is a challenge.

Sheriff Taylor investigates issues without a gun and by simply talking to people about their problems. Despite a good management structure, Pocono has been having a rough time of it for several years. It's off the beaten path and simply is not producing the type of racing that fans want to see.

Mayberry had a cast of memorable characters and Pocono does as well. It just seems that time and time again it's a tough sell to fans. This weekend, a truck series hauler knocked down the flagstand during the load-in process. That's just Pocono.

Nicole Briscoe quickly found herself in the middle of a TV mess during the pre-race show. The TV signal is sent from Pocono back to ESPN. A room called Master Control mixes that signal with commercials and sends that finished program feed out for the viewers.

Right after going on air, ESPN's Master Control experienced an equipment failure that resulted in the inability to switch-in commercials. Unfortunately, it left ESPN's Pocono crew awkwardly without direction and on the air nationwide. Briscoe kept her composure throughout the hour while the Bristol team changed facilities and finally got things ironed-out.

Rusty Wallace and Brad Daugherty are having a tough time. Rusty's comments are often head-scratching while Daugherty is now just a loud cheerleader. These two are sometimes more comical than informative. That is not their intended role.

Allen Bestwick has made the lap-by-lap issue for ESPN go away completely. The information is passed along, the exciting issues are described that way and the sense of having someone in charge on the air has been restored.

Dale Jarrett and Andy Petree knew going in that the field was going to be strung-out under green and that they would have to work hard to keep the viewers interested. Combined with Bestwick, the team put in a strong effort to keep the conversation flowing and point out the racing on the track. It was not an easy task.

Tim Brewer was a non-issue, but the pit reporters had to earn their money during an extended rain delay. Lots of interviews were done that ranged from outstanding to excruciating. In the infield, Briscoe got everything she could from Wallace and Daugherty. The TV team filled about 90 minutes.

The second chunk of racing quickly resembled the first. Intense on restarts until the tires started to fade and things became single-file once again. Pocono is a different kind of experience for teams and fans.

ESPN made good pictures in the weather conditions. Dual-stream in-cars were not utilized to their potential, but the director stayed wider than usual and showed multiple cars on camera shots. That really made a difference as the race went on.

Bestwick did a good job of bringing the race home with all the excitement one can muster for Pocono. At the finish, ESPN stayed wide and showed the leaders battling to the finish off the final corner. A basic post-race was done since NASCAR was over the scheduled timeslot.

This post will serve to host your race telecast wrap-up comments on the ESPN telecast. To add your opinion, just click on the comments button below.